Do people who have negative attitudes toward wealth accumulation have greater concern for community?

If people are cynical about the potential for everyone to share in the benefits of wealth creation it might seem reasonable to expect they would tend to have relatively more concern for community. If they think it is only possible for individuals to get rich at the expense of others, it might be reasonable to expect them to have a particular concern for helping other people and/or protecting the environment. On the other hand, as noted at the end of my last post, people who have strong feelings of individual agency - who tend to have positive attitudes toward wealth accumulation – do not tend, as a group, to be particularly selfish in their attitudes.


The simple analysis I have used to test these conjectures has involved comparing responses in the World Values Survey (WVS) to a range of questions relating to attitudes toward community of people with relatively negative and relatively positive views about capital accumulation. In asking about attitudes toward wealth accumulation, the WVS specifies a rating of 1for agreement that ‘people can only get rich at the expense of others’ and of 10 for agreement that ‘wealth can grow so there’s enough for everyone’. Data used in this exercise are from the 2005-2008 survey covering about 75,000 people in 57 countries. 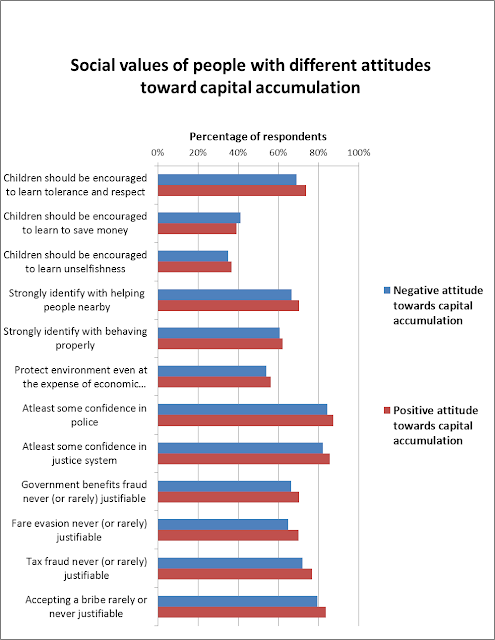 Some readers might be wondering whether this finding reflects a greater concentration of people with negative attitudes toward capital accumulation in countries in which the social fabric tends to be weaker. If that is so, it is not likely to be entirely coincidental. The question deserves further research.
Posted by Winton Bates at 5:32 PM