Do women value equality and security more than freedom? 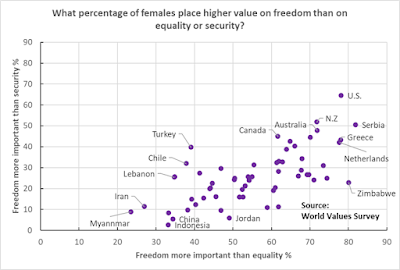 Some things I have read recently led me begin to wonder whether there is a general tendency for women to value equality and security more highly than freedom.  As a social movement, feminism has obviously been more strongly associated with egalitarianism than with libertarianism. It might also be possible to construct an argument that the traditional roles of women in society might also make them inclined to have greater concerns for ‘sharing and caring’, and hence have a bias toward egalitarianism. The role of women in caring for children might also be expected to lead them to place high value on economic security.

However, such speculation does not shed much light on the question of whether there is a general tendency for women to value equality and security more highly than freedom.

As it happens, the World Values Survey has relevant data on the relative values placed on freedom, equality, and security for 59 countries, from surveys conducted over the period 2017 to 2022. The relevant questions were worded as follows:

That wording leaves some ambiguity about the specific meaning that survey respondents attach to freedom, equality, and security. Nevertheless, the charts I have constructed using this data show some interesting patterns.

Are women less inclined than men to place a high value on freedom? The next two charts shed some light on that. Gender comparison 1 (below) shows the percentages of females and males who view freedom to be more important than equality. The comparison suggests that women have a tendency to place a slightly higher value on equality, but the differences between women and men are small in most countries. 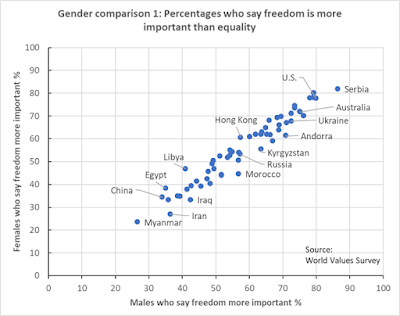 Gender comparison 2 (below) enables a comparison to be made of the percentages of females and males who view freedom to be more important than equality. This chart shows a much different pattern to that shown in Gender comparison 1. The chart shows that women have a tendency to place a much higher value on security, and that the differences between women and men are substantial in most countries. 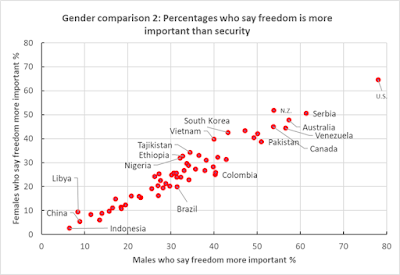 The results suggest to me that women’s support of liberty may be dampened by their concerns about economic security (if they perceive a trade-off to be required). However, the results do not support the view that there is a general bias towards egalitarianism among women in the high-income liberal democracies.

Posted by Winton Bates at 9:29 PM No comments:

Should we expect our heroes to be perfect?

When I am asked who my heroes are, I have often said that I don’t have any these days. If asked why, my response has been that my heroes all turned out to have feet of clay. 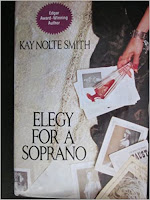 I began to reconsider that view while reading Kay Nolte Smith’s novel, Elegy for a Soprano. The main character in the book, Dinah Mitchell, finds out that she was an adopted child and learns that her natural mother is her idol, Vardis Wolf, a famous opera star. Vardis’ magnificently successful career is attributable to her natural talent, support of her friends and admirers, and her own dedication to developing her skills. She views her singing career as having the utmost importance. However, Dinah eventually learns that Vardis has a dark secret. When her singing career was just beginning, Vardis did something which showed complete disregard for the value of the life of another human.

After that brief sketch, readers might wonder why the novel induced me to reconsider my original view about heroes. You might expect me to say that no-one should be surprised if their idols turn out to have dark secrets. Heroes inevitably disappoint us!

So, what was it about the novel that has induced me to reconsider my view? Kay Nolte Smith managed to convey the complexity of Vardis’ character well enough for me to still admire her achievements, while feeling horrified by some aspects of her behavior. The author showed great skill in providing plausible explanations of the attitudes and behaviors of each of all the main characters in the novel.

The novel contains some discussion of whether people have a basic need to have heroes. It points to a difference between hero worship – viewing the hero as a sacred idol – and viewing a hero as a role model in respect of some aspect of your life. At that point the author quotes the passage from Longfellow’s poem A Psalm of Life which is reproduced at the top of this article.

It makes sense to me to look for opportunities to learn how others manage to achieve superior performance in various fields, and to recognize outstanding accomplishments. That has been my view for as long as I remember.

So, where do I end up? I now see no problem is referring to people who have superior performance or outstanding accomplishment as my heroes, provided I attach an appropriate qualification. They are entrepreneurial heroes, academic heroes, sporting heroes, artistic heroes, and so forth. I will not be surprised if I learn that most of my heroes are far from perfect in many aspects of their lives, and that some may even have dark secrets.

It is possible to recognize heroic achievements without engaging in idolatry.

Some readers may be interested in how I came to read Elegy for a Soprano. A few months ago I stumbled across an article by Daniel Kian Mc Kiernan, an American Economist, entitled ‘Ayn Rand and Me’ on his blog An Oeconomist. The article is critical of Ayn Rand but, unlike most Rand critics, the author seems to me to be seeking to offer a balanced appraisal. The article ends thus:

“By the way, I want to mention a book by another author, The Watcher (1981) by Kay Nolte Smith. Smith was at one time amongst those personally associated with Rand, but (like many) eventually left. The Watcher is a novel that successfully fused much of what virtue is to be found in Randian fiction with a deep sense of empathy. And its heroes don't simply march relentlessly towards triumph, but reach back to save people who ought not to be lost.”

That led me to read The Watcher. I was impressed, and decided to find out more about Kay Nolte Smith. A reviewer of her works suggested that Elegy for a Soprano was a better novel than The Watcher, and I am inclined to agree.

One reviewer has suggested that Elegy for a Soprano is inhabited by the ghost of Ayn Rand, as well as that of Maria Callas. With regard to Rand, I think it is worth noting that while Vardis Wolf could be described as a Nietzschean egoist, Ayn Rand sought to distance her views from those of Nietzsche in her later writings. For example, she wrote:

“Nietzschean egoists … are a product of the altruist morality and represent the other side of the altruist coin: the men who believe that any action, regardless of its nature, is good if it is intended for one’s own benefit.”