How good is this image of self-actualization? 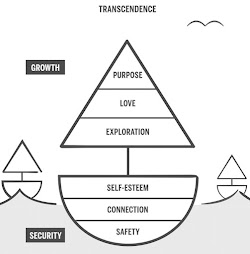 When you think about Abraham Maslow’s hierarchy of needs, what is the image that appears in your mind? I expect that most people who have some knowledge of the concept would think of a pyramid in which needs are layered one on top of the other, with physiological needs at the bottom and self-actualization needs at the top. If you have no idea what I am talking about, there is no need to worry. Andy Ogden’s sailboat illustration, provided above, is better. That image has been used effectively by Scott Barry Kaufman in Transcend, his recently published book which seeking to update Maslow’s hierarchy.

Kaufman points out that the pyramid image was created by a management consultant rather than by Maslow. He argues that the pyramid “had the unfortunate consequence of reducing Maslow’s rich and nuanced intellectual contributions to a parody and has betrayed the actual spirit of Maslow’s notion of self-actualization as realizing one’s creative potential for humanitarian ends”.

I have read many books aimed at the self-help market, but Transcend has more endorsements by psychologists than any I have previously read. Those praising the book include Martin Seligman, Steven Hayes and Steven Pinker. My inner economist tells me that there must be something wrong with a book preceded by five pages of praise, but I haven’t found much wrong with this one.

In explaining his metaphor, Kaufman suggests:
“Life isn’t a trek up a summit but a journey to travel through – a vast blue ocean, full of opportunities for new meaning and discovery but also danger and uncertainty”.

The deficiency needs that comprise the boat, safety, connection, and self-esteem work as a dynamic system. Under good conditions they work together toward greater security and stability. Under unfavourable conditions, they can lead toward insecurity and instability, causing people to focus attention on defending themselves.

The growth needs comprising the sails are exploration, love, and purpose. Kaufman suggests that “the drive for exploration is the core motive underlying self-actualization”. It involves the desire to seek out and make sense of novel, challenging and uncertain events. Love and purpose can build on the fundamental need for exploration. Loving is noted to be a powerful force, linked to growth, compassion, coping and authenticity. Purpose is defined as “the need for an overarching aspiration that energizes one’s efforts and provides a central source of meaning and significance in one’s life”.

Kaufman sensibly emphasizes the hazards of attempting to fulfill a need for purpose without working on other areas of growth:
“It is entirely possible to choose a striving that brings out the worst in yourself and others because it is motivated by a desperate, never-ending quest to fill a deficiency in one of the security needs, whether it’s safety, belonging, or self-esteem”.

The need for transcendence is depicted as being in the sky above the sails. Kaufman suggests that transcendence “goes beyond individual growth (and even health and happiness) and allows for the highest levels of unity and harmony within oneself and with the world”. Some further explanation might be helpful for those who, like me, read that and think immediately that they don’t need mystical experiences. The transcending experiences written about are not all mystical. Kaufman notes that transcendence incorporates a “unitary continuum,” of experiences ranging from becoming engrossed in a book, sports performance, or creative activity (what psychologist Mihaly Csikszentmihalyi refers to as the flow experience), to experiencing awe at a beautiful sunset etc, all the way up to the great mystical illumination.

A particularly useful contribution of the book is to make a clear distinction between healthy self-esteem and narcissism. Kaufman points out that narcissism is not just high self-esteem, in the sense of a quiet and sturdy confidence in oneself. Narcissists feel superior; they are arrogant and unwilling to accept criticism.

In writing the book, Kaufman has drawn on Maslow’s unpublished writings to illustrate the range and depth of his thinking. This passage, written by Maslow about 50 years ago, has contemporary relevance:
“It is … vital to emphasize that a democratic society is rooted in a set of feelings toward other people—feelings like compassion and respect. …  If we did not trust other people, if we did not like them, if we did not pity them, if we did not have brotherly or sisterly feelings for them, then a democratic society would of course be out of the question. Obviously, human history provides many examples to prove this point.”

Readers may have guessed already that I am impressed by Kaufman’s book. In my view he does an excellent job in bringing together many findings of psychologists relating to personal development. I particularly like the imagery in his use of the sailboat metaphor because it recognizes that each individual has prime responsibility for his or her own journey through life.

Posted by Winton Bates at 11:08 AM No comments: