What are the ingredients of good leadership?

As I contemplate leadership failures in some major organisations, in Australia and elsewhere, it strikes me that the people responsible for those failures have not been meeting the norms of behaviour expected of responsible adults. For example, it doesn’t seem like responsible adult behaviour to persist in charging customers for services that they haven’t received.


That has me wondering whether the prevailing emphasis on inspiring organisational leadership rather than efficient administration could be responsible for a decline in the quality of senior executives. It seems to have become possible for some people to rise to the top by learning how to present a vision and flatter stakeholders, without acquiring management skills and business ethics along the way. Perhaps we are seeing a shallow leadership culture displacing the long-standing management culture that encouraged business leaders to take pride in being trustworthy.

Should the gurus who began promoting an emphasis on organisational leadership about 30 years ago be held responsible for the shallowness of leadership in some modern organisations today?  As that question arose in my mind I decided to revisit a book that I had read about 30 years ago - On Becoming a Leader by Warren Bennis, a famous leadership guru. I had a vague recollection that Bennis argued that organisations need leaders, not managers.
My recollection was correct. The book contains a heading: “Leaders, Not Managers”. Under that heading there is a list of differences between leaders and managers. For example: “The manager administers; the leader innovates” and “The manager has his eye always on the bottom line; the leader has his eye on the horizon”. I don’t see recognition that organisations need leaders who have both high-level management and leadership capabilities.


However, the concept of leadership that Bennis advanced is far from shallow. He can’t be held responsible for readers who think leadership just involves mastering jargon about visions and stakeholders.


Bennis presents the view that “leaders are people who are able to express themselves fully”. He explains:


“The key to full self-expression is understanding one’s self and the world, and the key to understanding is learning – from one’s own life and experience”.


Bennis lists the ingredients of leadership as: a guiding vision; the passion to pursue that vision; integrity (encompassing self-knowledge, candour and maturity); trustworthiness; and curiosity and daring.


Those seem to be characteristics that would be displayed by any flourishing adult. As noted in an earlier post, human flourishing also requires alertness to the new opportunities emerging in changing circumstances.


That makes me to wonder whether there is any difference between the characteristics of a good leader and those displayed by any flourishing adult human. Toastmasters International, an organisation dedicated to assisting members to acquire leadership skills, as well as to improve communication skills, suggests one possible difference: “Great leaders inspire others to follow them”.


That difference is probably not important. Flourishing adults tend to display attributes required to attract followers, even when they don’t seek to be followed. They can’t avoid setting an example of behaviour that some others might choose to follow. As implied in the mission of Toastmasters clubs, the development of communication and leadership skills results in “greater self-confidence and personal growth”.


Perhaps I should try to sum up. It does seem possible that recent leadership problems in some major organisations are attributable to a shallow leadership culture. Some of these problems might have been avoided with a more conventional management culture - less emphasis on public relations and more emphasis on maintaining efficient and ethical management practices. Leadership gurus, such as Warren Bennis, might have contributed to such problems by downplaying the importance management skills. Nevertheless, the ingredients of leadership identified by Bennis are characteristics of flourishing adults - people who act with integrity. Organisations need leaders who have both high-level management and leadership capabilities.


One question which I have not addressed is whether it is possible to identify intermediate stages in acquiring leadership capabilities. Do you have to learn to think for yourself before you can be a leader? Does Robert Kegan’s concept of self-authoring represent an intermediate stage in development of leadership capabilities?
Posted by Winton Bates at 11:24 AM No comments:

Ruins of the forecourt of the temple of Apollo at Delphi where  “Know Thyself” was inscribed.


When I started blogging, about a decade ago, I decided that the title of each article would be a question. That seemed like a good way to explore the relationship between freedom and flourishing. As I saw it, the response to each question would lead to further questions. Looking back, the scope of the blog has been broader, and the exploration process less orderly, than I had originally envisaged, but I am still asking questions.


Asking questions makes me it easier for me to stay on topic when I am writing. It also prompts me to reconsider whether I am answering the right question. I have found it is not easy to ask questions that get to the heart of an issue if you don’t know much about it. I have often revised questions in the middle of writing an article as I have learned more about the subject matter.


Not long after I started blogging one of my friends asked me if I was aware of Betteridge’s law that any headline that ends in a question mark can be answered by the word no. At the time my response was that Betteridge’s law didn’t apply to my blog because a yes or no answer was not applicable to most of the questions I asked myself. That is still the case. Of the 19 questions considered in the blog over the last year, there were only 4 that could be answered yes or no and there was an even split between positive and negative answers.


Another friend made the comment that the approach I had adopted on my blog was somewhat Socratic. I doubted whether that was so, but I knew little about Socrates. A few weeks ago I decided that it was time I learned more about Socrates.


Socrates didn’t leave behind any books for us to read but it is possible to obtain a reasonably clear picture of his views from what others have written. The most important source is Plato, who was a follower of Socrates, but Plato seems to have used Socrates as a spokesman for his own views in some of the dialogues. I am relying here on Luis Navia’s book, Socrates: A life examined, which uses some other sources – including Xenophon and Aristotle - to distinguish the views of Socrates from those of Plato.

Socrates seems to have been a gregarious man who went around Athens talking to all sorts of people and asking them philosophical questions. He was loved and admired by a small group of devoted friends. It seems likely that most Athenians viewed him as an eccentric figure and were indifferent to his philosophical preoccupations. However, a few influential citizens viewed him as “a dangerous man who would question and challenge the beliefs and practices of the state religion” and “pour contempt on long-established political practices and customs”. That led an Athenian jury to find him guilty of irreligiosity and to sentence him to death in 399 BC, when he was 71 years of age.


Are the views of Socrates relevant to us today? One view that seems highly relevant is the idea that it is possible to obtain wisdom on ethical questions. Socrates rejected the relativism of the Sophists - teachers of rhetoric and public relations - who believed that ethical values were meaningless. The Sophists apparently believed that it is impossible to determine what is good or bad, right or wrong. I guess that Socrates would encourage us to view the core values of organisations – which often include integrity and similar concepts – as meaningful. He would discourage us from following the post-modern view that promises to adhere to such core values should be viewed as merely public relations exercises.


Socratic dialogue is also relevant to us today. For Socrates, the search for wisdom was based on the dictum “Know Thyself”. The point of departure of the dialogue was Socrates’ confession of ignorance about the correct definition of a moral state or mode of behaviour and his request to a companion to explain the concept. The explanation led to further questions, which uncovered inconsistencies in the view originally expressed. It was common for the discussion to end inconclusively, leaving the companion confused, but perhaps stimulated to think more deeply.


Luis Navia suggests that for Socrates the rigorously methodic and painfully honest examination of the things we say brings to light the thoughts that ultimately structure who we are. He suggests that Socrates’ goal was the unveiling of the human soul:


“Nothing is more important, nothing more urgent, than understanding who we are. This is the meaning of that memorable statement … : ‘An unexamined life is not worth living’." 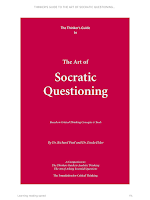 I have also consulted a book by Richard Paul and Linda Elder entitled The Art of Socratic Questioning, to obtain a contemporary view of this topic. The book is full of questions that might be useful to teachers and other leaders of group discussions. The authors suggest that as well as serving the purpose of helping students to distinguish what they know and understand from what they don’t know and understand Socratic questioning can “ help students acquire the powerful tools of Socratic dialogue, so that they can use these tools in everyday life (in questioning themselves and others)”.


The authors identify four directions in which we can pursue questions about a belief:


·         What reasons, evidence or assumptions underly that belief?


·         What opposing thoughts or objections would others raise, and how would you respond to them?


If we practice disciplined, self-directed questioning we have potential to be able to cultivate the “inner voice of reason”. This has potential to help us in many aspects of life, including blogging.


So, has the approach I have adopted on my blog been “somewhat Socratic”? The main Socratic element has been the initial question, which is the title of each article. It might be a good idea to make the blog somewhat more Socratic by making some future post specifically about question/problem definition.  For example: What are the underlying questions that need to be considered to come to grips with issue X, Y or Z?


Perhaps this post has raised more questions than it has answered. What important questions have I left unanswered?
Posted by Winton Bates at 5:26 PM No comments: