Are attitudes towards success, wealth accumulation and competition linked to feelings of individual agency?

The data used in this exercise are from the World Values Survey 2005-2008 which surveyed about 75, 000 people in 57 countries. The question concerning feelings of agency asks respondents how much freedom of choice and control they feel over the way their lives turn out. A rating of 1 means none at all and a rating of 10 means a great deal. The average rating is 7. Ratings of 1 to 4 are relatively uncommon and responses with those ratings have been aggregated in the charts shown below.

The first chart shows how responses relating to attitudes towards the relationship between hard work and success vary among people with stronger and weaker feelings of personal agency. The survey asks whether respondents agree with the statement ‘hard work brings success’. A rating of 1 means that ‘in the long run hard work usually brings a better life’, whereas a rating of 10 means that ‘hard work doesn’t bring success – it is more a matter of luck and connections’. Ratings have been aggregated in the chart to show the differences more clearly; ratings 1to3 have been labelled ‘positive’, ratings 4 to 7 have been labelled ‘mixed’ and ratings 8 to 10 have been labelled ‘negative’. The data in each of the charts add to 100% on the depth access (i.e. for each level of agency, the red, blue and green columns added together equal 100%) . 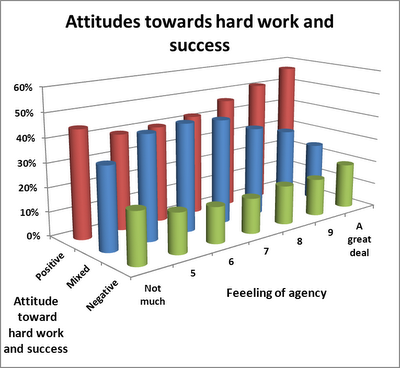 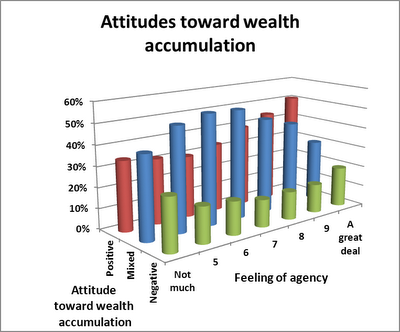 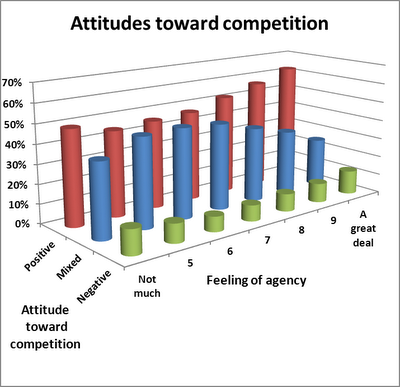 The pattern shown in all three charts is fairly similar with people who have strong feelings of agency tending to have more positive attitude toward success from hard work, wealth accumulation and competition. This result was much as I had expected but I had thought the attitudes shown by people with relatively low agency might be somewhat more negative than they appear to be.

What do the results mean? Previous research has suggested that feelings of agency are related to the amount of freedom that people actually experience in their lives. The results suggest that people who feel a lot of freedom tend to have more positive attitudes toward success from hard work, wealth accumulation and competition.

Previous research suggests that people who have strong feelings of agency are not particularly selfish in their attitudes. I wonder whether that is also true of people who have positive attitudes toward wealth accumulation.

Postscript:
That question is followed up here and here.
Posted by Winton Bates at 2:43 PM