How can people who approach issues from different ideological perspectives have useful policy discussions? 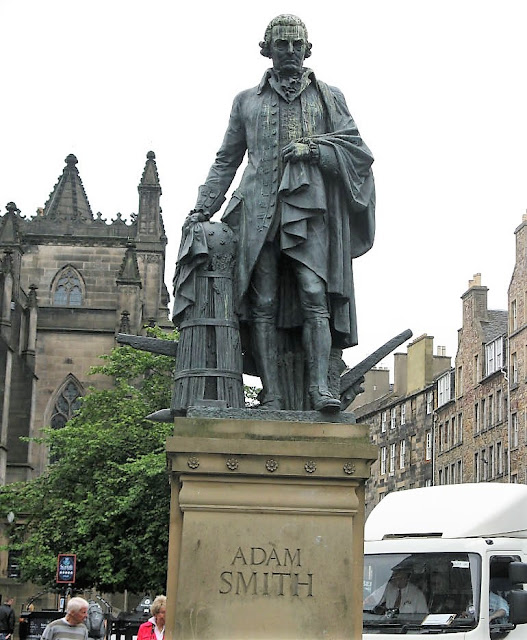 Like the ideological opponents of free markets, the birds of Edinburgh show little respect for the founder of Economics

In my view there is a lot to be said for attempting to develop a coherent ideological position – a system of ideas and ideals - that can be applied to public policy issues. Those who insist on approaching every issue with an empty mind, refusing to draw upon a priori reasoning and lessons learned from previous experience, are severely handicapping themselves.


It is important to note that having a coherent ideological position does not necessarily imply being ideologically blinkered. An ideological commitment can be consistent with being sufficiently openminded to consider the possibility that it could be appropriate to depart from a general principle in a particular instance. For example, people who have an ideological commitment to free markets are often open to persuasion that government regulation might be warranted in some instances.


Ideologies are not necessarily heavily laden with values.  In my view that applies particularly to the free market ideology favoured by many economists. As a result of their training and work experience economists tend to acquire objective knowledge about the operation of markets that leads them toward a system of ideas and ideals that is relatively favourable to free markets.


Many non-economists have an anti-market bias. As Bryan Caplan implied a few years ago in his book The Myth of the Rational Voter (discussed previously on this blog) some people have a strong ideological attachment to false beliefs.  More generally, however, it seems to me that the anti-market bias among non-economists is attributable to lack of understanding of the functioning of markets. Few people are so wedded to conspiracy theories about market behaviour that they are unwilling to consider economists’ explanations.


During my work career as an economist, I had many difficult policy discussions with engineers, who seemed to have acquired an ideological commitment to planning that led them to favour government regulation. From their perspective free markets appeared to be chaotic and planned solutions appeared to promise order. However, they were able to appreciate that actual outcomes that were likely to emerge from chaotic political and administrative processes might not be superior to market outcomes.


The most difficult policy discussions I have been involved in have been with Greenies whose ideological opposition to free markets is based on the view that capitalism leads to bad environmental and social outcomes. The main problem in these discussions is not a difference in values; we all want to avoid environmental and economic catastrophes. It seems to me that the main barrier to communication is that the Greenies have an ideological commitment to the belief that better outcomes will follow automatically if the regulation they favour displaces markets and voluntary cooperation.


In thinking about how economists could have more useful policy discussions with Greenies it occurs to me that there is not much to be gained by talking to them about externalities. They might support proposals for limited intervention to correct specific externalities, but they actually see no virtue in limited intervention. They see market failure as pervasive and believe that superior outcomes can be produced by burdening governments with massive responsibilities.


I wonder whether it might be useful to begin a policy discussion with Greenies by considering the tragedy of the commons. When I re-read Garrett Hardin’s 1968 article with that title I was reminded of its shortcomings with regard to population projections, but his warnings about the potential for common pool resources to be over-exploited have a fairly solid foundation in economic reasoning.


“The tragedy of the commons develops in this way. Picture a pasture open to all. It is to be expected that each herdsman will try to keep as many cattle as possible on the commons. Such an arrangement may work reasonably satisfactorily for centuries because tribal wars, poaching, and disease keep the numbers of both man and beast well below the carrying capacity of the land. Finally, however, comes the day of reckoning, that is, the day when the long-desired goal of social stability becomes a reality. At this point, the inherent logic of the commons remorselessly generates tragedy. …
Each man is locked into a system that compels him to increase his herd without limit - in a world that is limited. Ruin is the destination toward which all men rush, each pursuing his own best interest in a society that believes in the freedom of the commons. Freedom in a commons brings ruin to all.”


However, as Elinor Ostrom demonstrated, it is by no means inevitable that use of common pool resources will end in tragedy in the absence of government intervention. She found that some communities of individuals have been able to manage common pool resources with reasonable degrees of success over long periods of time “relying on institutions resembling neither the state nor the market”.


The methodology adopted by Elinor Ostrom in her research strikes me as highly relevant to the question of how people who approach issues from different ideological positions can have useful policy discussions. In the preface to Governing the Commons: The Evolution of Institutions for Collective Action, Elinor Ostrom wrote:


"Instead of presuming that the individuals sharing a commons are inevitably caught in a trap from which they cannot escape, I argue that the capacity of individuals to extricate themselves from various types of dilemma situations varies from situation to situation. The cases to be discussed in this book illustrate both successful and unsuccessful efforts to escape tragic outcomes. Instead of basing policy on the presumption that the individuals involved are helpless, I wish to learn more from the experience of individuals in field settings. Why have some efforts to solve commons problems failed, while others have succeeded? What can we learn from experience that will help stimulate the development and use of a better theory of collective action – one that will identify the key variables that can enhance or detract from the capabilities of individuals to solve problems?"


Some advocates of smaller government (including myself) are fond of pointing out that the logic of the tragedy of the commons applies to interest group politics as well as to physical resources. When goods such as education and health services are converted into common pool resources there is an incentive for interest groups to attempt to increase their share at the expense of other groups and the general public. More generally, when interest groups view the coercive power of the state as a common pool resource to be used for the benefits of their members, the adverse impact of tax and regulation on incentives for productive activity is likely to result in outcomes that will be detrimental for everyone. The incentives facing individual interest groups in that situation are similar to those facing individual fishermen – when their collective actions results in over-fishing, that is detrimental to all.


However, it is reasonable for the advocates of big government to ask why the tragedy of the political commons has not resulted in the failure of all experiments in representative government. If we apply Elinor Ostrom’s research methodology we have to acknowledge that some countries have been more successful than others in coping with the common pool resource problems associated with interest group activity. The reasons for this seem to me to be an important topic for research and discussion.
It strikes me that people who approach issues from different ideological perspectives would be able to have more useful policy discussions if they could turn their attention to what they can learn from the actual experiences of people in different institutional and policy settings.
Posted by Winton Bates at 11:40 AM 2 comments: