Are freedom and trust linked to social values and support for free markets?

In my last post I presented a table showing that countries in which people have strong social values tend also to have high proportions of the population supporting free markets. Unfortunately, that table is difficult to read because of the amount of information it contains, so I am presenting a ‘pruned’ version below.


Apart from presenting fewer indicators, the main difference has to do with the ranking of countries. In my last post, the countries are ranked according to levels of interpersonal trust. In the table below, the countries are ranked by an index (not shown) that gives equal weight to interpersonal trust and feelings of individual agency. As before, each entry in the table is presented against a green, yellow, orange or red background depending on how favourable it is to either the market economy or community values. 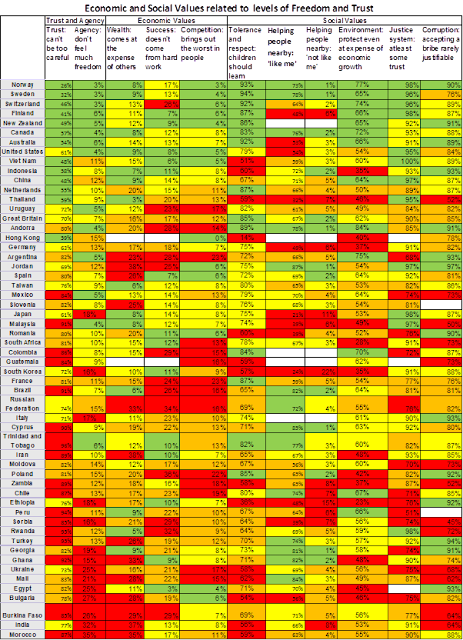 The table suggests that values supporting both community and free markets tend to be stronger in countries in which there are relatively high levels of trust (or absence of distrust) and relatively strong feelings of individual agency (a high proportion of individuals who feel that they have some freedom of choice and control of their lives). It seems reasonable to expect that societies that encourage tolerance and respect for others, as well as confidence in the justice system, would tend to foster both trust and the feelings of agency that are necessary for entrepreneurial innovation. Paul Zak and Stephen Knack noted that high levels of trust are favourable to economic activity because they reduce transactions costs (‘Trust and Growth’, The Economic Journal, 2001). Zak has argued subsequently that moral behaviour - i.e. trustworthy behaviour - is necessary to reduce cheating without exorbitant transactions costs. It also enables employees, for example, to be given greater opportunities for self-direction (Zak, ‘Moral Markets’, 2008, xvii and 273).

The next step in the analysis is to consider the available evidence on changes over time. What changes have occurred in community values in market economies over the last couple of decades?
Posted by Winton Bates at 11:59 PM

I really agree with the facts that you have shared on this post. An interesting topic like this really enhances reader's mind to have more effective decisions over a certain issue.