Is our "real" constitution pro-liberty? 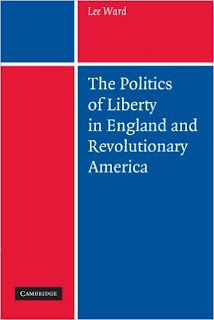 My main reason for reading Politics of Liberty in England and Revolutionary America, by Lee Ward, was to understand how the English Whigs could oppose the American colonists’ quest for independence. Ward explains why they did not have any problem reconciling their opposition to American independence with their philosophical views.

Constitutional ideas that were held in high esteem by Thomas Jefferson and many other American politicians - particularly the views of John Locke - were on the radical fringes of political discourse in England. The English Whigs (and Tories) were more strongly influenced by the constitutional ideas of Samuel Pufendorf (1632-1694) a German jurist and political philosopher who argued that whatever form of government a people constituted must be guided by a supreme power that is subject to no limitations or external force. The British Parliament was seen by parliamentarians like William Blackstone, and even Edmund Burke, as having supreme power over the colonies.

Whilst reading about the differing constitutional ideas being put forward by influential writers in England and colonial America my mind often turned to the concept of a real constitution put forward by Sheldon Richman in America’s Counter-Revolution: TheConstitution Revisited (discussed previously on this blog). Richman defines the real constitution as the set of dispositions that influence what most people will accept as legitimate actions by the politicians and bureaucrats who make up the government. He derives support for this concept from Roderick Long’s observation that “government is not some sort of automatic robot standing outside the social order it serves; its existence depends on ongoing cooperation, both from the members of the government and from the populace it governs” (NPPE, Vol 2, No 1).

All the advocates of different constitutional ideas in England and America in the 17th and 18th centuries were seeking to influence their readers’ dispositions concerning what they would accept as legitimate actions by governments. Robert Filmer used his interpretation of scripture as a basis to argue that even tyrannical kings had a divine right to rule.  Thomas Hobbes argued that while individuals had a right to self-defence, life would be “solitary, poor, nasty, brutish and short” if they were unwilling to authorise a strong government to maintain order. John Locke’s view of the state of nature - life without government - was not much more benign: in his view the absence of government to act as an umpire to settle disputes would result in a state of war, or something dangerously close to it. Locke argued, however, that government power derives from the individuals who compose society; it is held by governors as a form of trust; and if governors break this trust - fail to preserve the property (lives, liberties and estates) of individuals - then power devolves back from whence it came.

Moderate Whigs successfully advocated a Pufendorfian interpretation of the Glorious Revolution which deposed James II in 1688. Rather than asserting that the people had a natural right to appoint and depose their governors, the House of Commons accused James of having “endeavoured to subvert the constitution of the kingdom, by breaking the Original Contract between king and people”. However, the House didn’t even present those actions as grounds for rightful deposition – it relied on the legal fiction that James had abdicated. All mention of an original contract was expunged from the final version of the Declaration of Rights presented to William and Mary.

As already noted, the constitutional ideas advocated by Thomas Jefferson owed a great deal to John Locke. Tom Paine went somewhat further by asserting that modern society rather than the classical polis provides the psychic plane on which moral virtue flourishes:
“Society is produced by our wants, and government by our wickedness; the former promotes our happiness positively by uniting our affections, the latter negatively by restraining our vices”.
Unfortunately, Paine’s argument for government to be viewed as “a necessary evil” was not matched by recognition of the potential for legislative tyranny. Paine believed that legislatures would protect individual liberty because they would reflect the “popular will”.


Our experience with representative government over the last couple of centuries should have made everyone sceptical of claims that democratic constitutions allow the people to rule. The only way the people can rule is if the real constitution is pro-liberty – and that can only happen if enough individuals accept responsibility for governing their own lives. In my view Karl Popper was right to defend democracy on the grounds that it provides a way to get rid of bad governments without bloodshed. Democracy does not necessarily help us to choose good government.
Posted by Winton Bates at 4:57 PM No comments: