There is conflicting evidence on the impact of education on happiness. Some studies show that higher educational qualifications have a positive impact on life satisfaction, while others show a negative impact.

Some recent research by Nattavudh Powdthavee, Warn Lekfuangfu and Mark Wooden has applied a structural equation model to Australian data to estimate both the direct and indirect effects of education. The authors found that the positive indirect impacts of education on life satisfaction outweigh its negative direct impact (i.e. holding other things equal). The strongest positive indirect effect is via income, followed by long-term health.

These findings may provide some comfort to the providers of educational services. They can claim that education tends to enable people to have happier lives because it makes them to become wealthier and remain healthier.

However, the findings also suggest that young people seeking life satisfaction might achieve that goal to a greater extent if they can remain healthy and find a path to wealth that  does not involve a great deal of education.

Providers of education services might do better to argue that it is better to have a meaningful life rather than to have high levels of emotional well-being. Roy Baumeister has reported some research findings which suggest that although there is fairly high correlation between being happy and feeling that your life is meaningful, there are some important differences. For example, happiness is about the here and now, whereas meaningfulness seems to be more about assembling past, present and future into some kind of coherent story. It would be nice to think that education would help people to do that, but I have not seen that proposition tested against evidence. 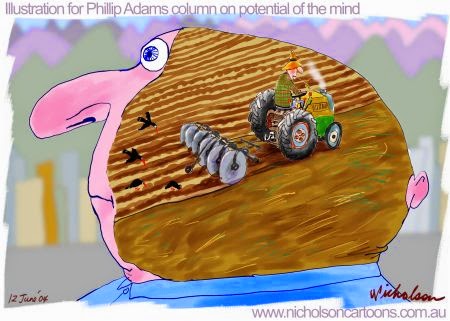 Cartoon by Nicholson, originally published in "The Australian".

Providers of educational services may also be able to argue that the education experience itself is not the cause of unhappiness of educated people. A study by Michael Dockery, previously discussed on this blog, indicates that young people in Australia who experience higher education switch from having relatively high to relatively low levels of happiness (compared to others of the same age) at about the time they complete their degrees. There are several possible explanations for this, but the one I now favour is that young people compare themselves to a different reference group when they make the transition from higher education to work. When at university they are likely to compare their lifestyles to those of other members the undergraduate community, but after they gain employment they are more likely to compare their lifestyles with those of successful workmates.

If higher education tends to encourage people to compare their own achievements in life with those of other educated people, who tend to be high achievers, is that a bad thing? I don’t think so.
Posted by Winton Bates at 7:58 PM 2 comments:

Do people value the happiness of their families above their own personal happiness?

One way to answer this kind of question is to ask people to choose between hypothetical situations with different ratings of family well-being and variables such as life satisfaction, ratings of life relative to best and worst possible, appreciation of life and absence of negative emotion. That is the approach taken in an exploratory study by Daniel Benjamin, Ori Heffetz, Miles Kimball and Nichole Szembrot entitled, “Beyond Happiness and Satisfaction: Toward well-being indices based on stated preferences.

The people surveyed tended to indicate a stronger preference for options offering high “overall well-being to you and your family” than for any options regarding the 135 other aspects of well-being covered in the survey. The findings were based on an internet survey of 4,600 Americans.

The results help to explain why previous studies have shown that many people are prepared to sacrifice life satisfaction in order to obtain higher incomes.

Some of the other findings of the study are interesting:

The authors are at pains to point out the exploratory nature of their study and the many problems yet to be resolved in developing well-being indexes based on stated preferences. That might explain why some results that seem anomalous. For example, it is difficult to understand why “your rating on a ladder where the lowest rung is ‘worst possible life for you’ and the highest rung is ‘best possible life for you” is ranked far below “how satisfied you are with your life”( 103 versus 13). Previous research suggests that survey respondents view high ratings on those well-being indicators as close substitutes. Again, the ranking of “your material standard of living” (98) is much lower than the ranking of “your financial security” (6) and “your feeling that you have enough time and money for the things that are most important to you” (12).