Are we better off when we have charismatic leaders?

However, by the time I was about half way through ‘The Charisma Myth’ I was thinking that the world might be a better place if there were a lot more charismatic people. Olivia demystifies charisma by suggesting that it consists of three behaviours – presence, warmth and power. Presence is about being fully present when you are in a conversation with another person. Warmth is about being benevolent, altruistic, caring etc. Power is about being perceived as able to affect the world around you. It seems like a good idea for everyone to show interest in what others are saying, to have good feelings toward other people and to show through their posture that they know that they have a right to occupy space.

Soon after that, however, I began to wonder whether it was the kind of book I should be reading. I think it was the bit about imagining yourself to be a big gorilla, taking up a lot of space, that got me wondering. The gorilla exercise might be good advice for people who have doubts about their right to occupy space, but it reminded me of the objectionable behaviour of someone I once met who held a powerful position which entitled him to sit at the head of a board room table. Instead of sitting in that position, this person sat at the side of the table, spreading his papers to occupy the space of about three normal people and leaving less space for everyone else. At the time I thought he was just doing it to display his power, but I now wonder whether it was something he learned to do at a leadership training course.

It was probably the catchy title that motivated me to read this book. I was interested in discovering the secret of charisma. But I must admit that once I started reading I decided to do some of the exercises in the book to see if I could develop some charisma. (It might take a lot of practice!)

I suspect that most of the people reading the book will be looking for more effective ways to win friends and influence people. That is not a problem, but the sub-title, ‘How anyone can master the art and science of personal magnetism’, might attract people who seek personal advantage at the expense of other people.
In his recent comments on the book, former blogger Arnold King, wrote:
‘The self-help book I wish people would read is "How to recognize when you are being seduced by charisma and dial down your response." I think that a reader can find some of that information in this book, although it is not presented with that purpose in mind’.

We know that an attempt is being made to manipulate us when we detect pretence and insincerity. Olivia suggests that most people find it easy to perceive when others are being inauthentic because it shows up in their body language. Even if people read the book for ulterior motives, there is a fair chance that if they do the exercises they will tend to change their perceptions and behaviour in ways that would make them show genuine presence and warmth. Hopefully this would mean that they are less likely to knowingly exploit the vulnerabilities of others. But it would still leave potential for charismatic leaders who believe their own hype to lead their followers astray.

How can we tell when a charismatic leader is claiming to do things that he/she is not capable of doing? Imagine a political leader who obviously has massive confidence in his/her own abilities. This person makes it obvious from what he/she says that he/she listens to what ordinary people have to say. He/she shows great personal warmth and presents a vision of how life could be better for everyone.

Are there any warning signals to look for that might suggest whether such a leader is likely to end up disappointing his/her followers? In my view, an ambitious vision presented by a leader who shows no hint of doubt about his/her ability to achieve the desired outcomes should be enough to set alarm bells ringing loudly.
The problem is that a lot of people don’t want to hear the alarm bells. The expectations gap (that I write about in Chapter 8 and 9 of the book I am writing) is as much the result of voters wanting to be led to fantasy land as of political leaders promising to take them there. Nevertheless, a leader can generate support by admitting that he/she has ‘nothing to offer but blood, toil, tears and sweat’, when it becomes obvious that unpleasant truths must be faced.

So, after reading the book, do I think we are better off with charismatic leaders? Presence and warmth are obviously good qualities for everyone to have, including political leaders. As for power, I think it can be positive or negative depending on its source. Leaders who display unlimited faith in their ability to accomplish miracles will almost invariably disappoint everyone, including their followers. Charisma is a plus when the power component comes from intellect and/or values that might help the leader to do the job.
Posted by Winton Bates at 8:18 PM No comments:

Email ThisBlogThis!Share to TwitterShare to FacebookShare to Pinterest
Labels: Frames and beliefs, politics

Is there a close relationship between subjective and objective indicators of environmental protection?

The subjective indicator of environmental protection that I have in mind is data from the Gallup World Poll on the percentage of respondents who say they are satisfied with efforts to preserve the natural environment. I have used this as one of several indicators of opportunity for individual human flourishing in a draft of Chapter 6 of ‘Free to Flourish’, the book I have been writing.

The objective indicator of environmental protection that I have in mind is the Environmental Performance Index (EPI) which is the result of a major collaborative project of research agencies associated with Yale and Colombia universities. The EPI is calculated on the basis of 22 performance indicators reflecting facets of environmental public health and ecosystem vitality.
The relationship between the two indexes is shown in Figure 1 below. 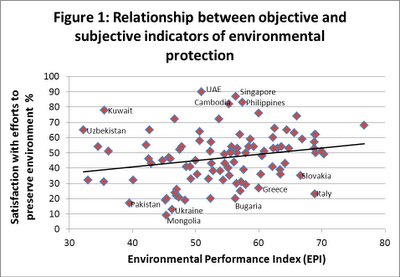 Some light is shed on what seems to be happening by a regression analysis which seeks to explain satisfaction with efforts to protect the environment in terms of government effectiveness (using the relevant indicator in the World Bank’s suite of governance indicators) and the EPI. The analysis suggests that the governance variable is much more important than the EPI in explaining satisfaction with efforts to protect the environment. This is shown graphically in Figure 2, which plots the satisfaction variable against government effectiveness. The points shown as blue squares are the predicted values for each country based on the multiple regression (including both of the explanatory variables). The values barely diverge from the black line in which the government effectiveness variable is the only explanatory variable. 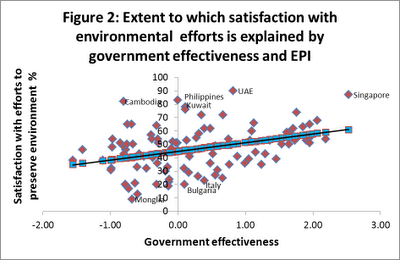 My conclusion is that satisfaction with efforts to protect the environment is more a measure of satisfaction with governance than a measure of environmental protection. On this basis it would probably be preferable to use the EPI as an indicator of the impact that environmental factors are likely to have on opportunities for individual human flourishing.I am using the EPI in the latest draft of Chapter 6 of 'Free to Flourish'.

Posted by Winton Bates at 10:42 AM No comments: