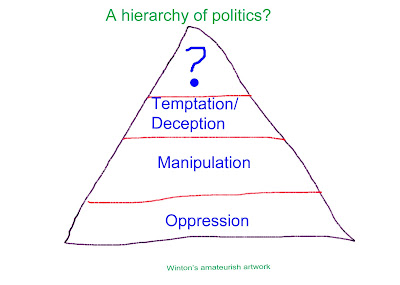 It is difficult to observe democratic politics without getting the impression that it brings out the worst in people. We frequently see politicians elbowing each other out of the way as they struggle to gain power and influence. We often see them make promises they are not likely to be able to keep. We see some of them endlessly repeating slogans whose only virtue is that they once appealed to our basest instincts. We see others stating the obvious with great gravitas. We see quite a few advancing their personal interests at the expense of the people they are meant to serve.

So, how come there has been so much economic and social progress in the western democracies over the last century or so? If democratic politics brings out the worst in people, wouldn’t you expect outcomes to have been are a lot worse than they have been?
The findings of Christian Welzel’s research - which I reviewed on this blog- suggests that as a consequence of economic development people in an increasing number of countries have been able to climb an emancipation ladder (Welzel refers to it as a utility ladder of freedoms) analogous to Abraham Maslow’s hierarchy of needs. As economic development has proceeded in an increasing number of societies, people in those societies have tended to adopt emancipative values reflecting concern about such matters as personal autonomy, respect for the choices people make in their personal lives, having a say in community decisions, and equality of opportunity.

In an article published in Policy in 2014 I considered whether emancipative values might be morphing into an ‘entitlement culture’ that could threaten economic freedom and material living standards. My research left me feeling optimistic that if such a tendency exists, there is a good chance that it will be remedied by democratic political processes.

If my optimism about the future outcomes of democratic politics in high-income countries is well grounded the impression that politics brings out the worst in people cannot be entirely accurate. Actually, that cynical impression doesn’t even stand up to scrutiny when I consider the behaviour of some politicians I have met.

Those thoughts came to mind when I was reading Michael Hall’s Political Coaching:Self-Actualizing Politics and Politicians, published last year. Michael is a psychologist who writes about and teaches an approach to personal development strongly related to Maslow’s hierarchy of needs. I have read many of his books and attended a couple of his seminars, so I thought it might be interesting to see how he applied his ideas to politics.

Michael describes the political ideal as follows:
“Politics is designed to cultivate the good life. We create politics so that people in our social group can live the kind and quality of lives that they wish to live – to satisfy the basic human needs and then to fulfil the highest of human dreams and potentials. The design of politics is to create a human system whereby people can develop their own powers and freely use those powers in appropriate ways that simultaneously facilitates their highest and best and that supports the same for all in the community” (p15).

Immediately afterwards he acknowledges that the ideal he has described is not what immediately comes to mind when most people think of politics.

Michael argues that politics is inevitable because humans are social beings. The problem is not with the existence of politics but with how we do our politics. That depends on the quality of our relationships with each other, which in turn depend on our understandings, beliefs, meanings and experiences. He implies that a change in political culture can only occur if more people engaged in politics become self-actualizing.

I think the book is at its best in discussing principles for positive political conversations (Chapter 11). These principles include: showing willingness to listen to opposing views; approaching issues in a spirit of respectful inquiry; trying to understanding where other people are coming from; and looking for positive intentions and values in opposing views.

Unfortunately, Michael Hall doesn’t discuss the potential role of social media in promoting more positive political conversations and a better political culture. In my view social media has potential to make a large contribution to lifting the quality of political debate. However, that will not happen until more participants who are capable of lifting the quality of discussions actually seek to do so. I should be making more of an effort to lift my own performance in that regard.
Posted by Winton Bates at 7:21 AM No comments: