Some readers will know exactly what I mean by this question. Others may be wondering: Where is Bhutan? What does he mean by success? And why should we care?

Bhutan is a small country which has not had much exposure to the modern world. The first roads were built in the 1960s and TV was only introduced in 1999. It is located at the eastern end of the Himalayas, sandwiched between India and China. It covers about the same area as Switzerland and has a population of about 700, 000 people. About 75% of the population are Buddhists and most of the remainder are Hindus of Nepali descent. 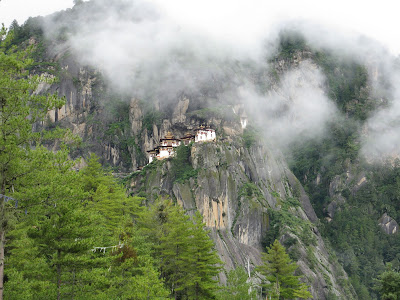 The 'Tiger's Nest' monastery, near Paro

What do I mean by success? About 40 years ago the former king of Bhutan famously declared that ‘gross national happiness is more important than gross national product’. This play on words led eventually to gross national happiness becoming a national objective of Bhutan. In terms of this objective, Bhutan will succeed if it can modernize so that the people can enjoy the benefits of the modern world, without major social problems, loss of culture or environmental damage.

So, will Bhutan succeed? If we look at the matter from a management perspective, some of the necessary conditions for successful pursuit of goals have been established: 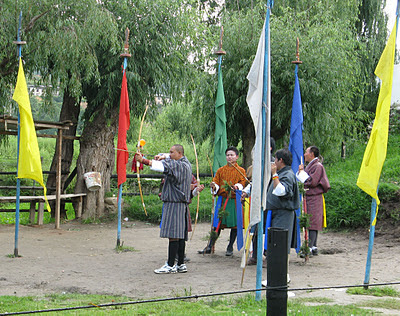 Archery: the national sport and an important cultural activity

The chances of success might look good from a management perspective, but will the people of Bhutan actually be any more successful in coping with the modern world than the people in other countries have been?

The first point, which seems obvious to me from my short visit, is that most of the people of Bhutan, like most people elsewhere, want the amenities of modern life. The more they know about how people live in wealthy countries, the more they are likely to aspire to have the stuff that people in wealthy countries take for granted – the household items that take the drudgery out of life, the phones and internet access that enable us to stay in touch with each other, motor vehicles – all that and more. It will become obvious to an increasing proportion of Bhutanese that a lot of this stuff can be useful - even though they may be happy with what they have at the moment.

The big question, in my view, is the extent to which Bhutan will be able to obtain the benefits of modernity without ending up with the social problems of modern societies? How will they cope with the potential for weakening of traditional values and support systems as larger numbers migrate from rural areas in search of a better life in the cities? How can they ensure that young people continue to acquire social values and avoid the weakening of the social fabric (which seemed evident, for example, in the orgy of rioting and looting in London a couple of months ago)? How can they provide a social welfare safety net without ending up with large numbers dependent on welfare benefits? How can they avoid the excesses of a consumer society, with substantial numbers of people incurring excessive debts to live unaffordable lifestyles? How can they avoid having large numbers of people living unhealthy lifestyles, addicted to TV or the internet and vulnerable to inducements of advertisers?

I think there are grounds for hope that the government of Bhutan will learn from the mistakes of other countries and come up with sensible answers to such questions. It is obvious from the international conferences it has been holding that the government is actively seeking to learn from experiences of other countries. The way survey results are being used also provides grounds for hope that Bhutan will succeed. For example, the emphasis that the government is placing on providing opportunities for children to learn skills in mindfulness makes me hopeful that young people in Bhutan are more likely to learn as they grow up that it is their individual responsibility to make best use of the opportunities available to live a meaningful life. What that means at a practical level is learning to accept responsibility for the important choices in their lives, including choices about such mundane matters as what to eat and when to switch off the TV.

On balance, I think there is a better than even chance that Bhutan will succeed in modernization with fewer social problems than have been experienced elsewhere in the world. 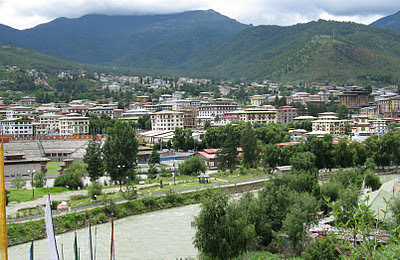 Thimphu: the capital city of Bhutan
Posted by Winton Bates at 6:51 AM

OMG, I had no idea of this country and I had no idea that there is a place like this in the world, I wish from all my heart the people of Bhutan be happy!

Yet another case where I learn how limited our view of the rest of the world is. There are so many hidden jewels on the planet like Bhutan!