Is Australian housing more than 40% over-valued? 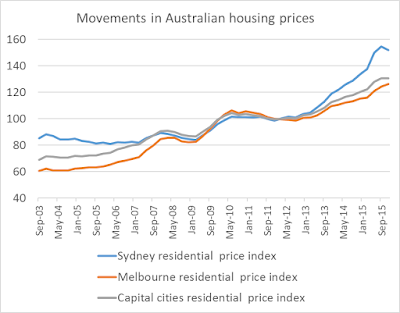 A recent article in The Economist suggests that “housing appears to be more than 40% overvalued in Australia, Britain and Canada” (“Hot in the city”, April 2, 2016 - possibly gated). This claim is based on the extent that the ratios of prices to disposable incomes and prices to rents are above their long term averages in those countries. By contrast, according to The Economist, housing prices in the United States are currently at “fair value” because those indicators are close to their long run average.

When they talk about “fair value” I guess what the authors of The Economist article have in mind is an equilibrium price that may differ from current market prices.  That raises some thorny conceptual issues, but I am prepared to accept that markets are sometimes affected by the irrational exuberance or pessimism of large numbers of investors.

The Economist has been using the same methodology for quite a few years now to suggest that housing prices are overvalued in countries in which they have risen strongly since the GFC.

When I wrote in 2011 about a previous article in The Economist using this methodology I pointed out that it was unrealistic to expect average rental yields (the inverse of the house price to rent ratio) in Australia to return to its long term average over the period since 1975 because over the first half of that period high nominal interest rates were suppressing demand for housing. As inflation rates and interest rates came down, housing affordability improved markedly during the 1990s, but this led to increased demand for housing, a sharp rise in house prices and a decline in rental yields. What we were seeing was a return to normality rather than the emergence of a house price bubble.

The Economist has published an infographic (ungated) which neatly illustrates how the ratios of prices to disposable incomes and prices to rents are currently above their long term averages in Australia, Britain and Canada. However, their infographic also illustrates the potential for large errors to be made by assuming that long term averages of house price to rent and house price to income ratios represent equilibrium prices. If you look at movements in the ratios of prices to disposable incomes and prices to rents over the whole period 1970 to 2016, you will notice that those ratios for Australia and Canada were well below the corresponding ratios for the US in the 1970s and ‘80’s. The same was true for Britain in the ‘90s. Even if actual price to income and price to rent ratios were currently the same in all four countries, the ratios for Australia, Canada and Britain could still be expected to be above their long run averages.

So, what does a comparison of actual ratios for Australia, Canada, Britain and the United States show? I haven’t attempted a complete assessment, but the latest data from Global Property Guide (GPG) on gross rental yields suggests yields of 4.4% for Australia (Sydney), 4.4% for Canada (Toronto), 3.2% for the UK (London) and 3.9% for the US (New York). The GPG data for the US relates to Manhattan which might be perceived by investors to offer better prospects for capital gains than most other localities in the US. The Economist’s data on price to rent ratio’s for the US implies a much higher gross rental yield for New York (about 7%) and even a somewhat higher yield for San Francisco (about 5%).

Given current and prospective interest rate levels, those comparisons do not seem to provide much evidence of irrationality in housing prices in any of those countries. It seems to me that there is no more reason to think housing investors in Australia, Canada and Britain have been irrationally exuberant in recent years than to think those in the United States have been irrationally pessimistic.
Posted by Winton Bates at 2:02 PM No comments: