Did Enlightenment thinkers believe that reason could illuminate all phenomena? 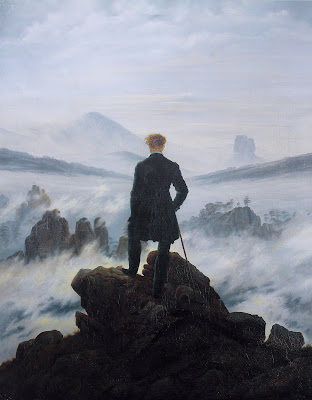 When I began to think about David Friedrich’s painting “Wanderer Above the Sea of Fog”, there seemed to be something odd about it. The painting reminded me of a TV news report I saw recently showing an Australian politician walking along a beach wearing a business suit. Both the politician and the “wanderer” seemed out of place. Perhaps the politician had a busy schedule which prevented him from changing into beach attire, but how can we explain the symbolism of the painting?

László Földényi, a Hungarian essayist, has suggested that the painting reflects the longing of Romantics to retreat from the fog of prosaic life “and find in nature that universal connection which civilization was supposedly unable to provide”. Földényi implies that, contrary to their intentions, the Romantics’ view of nature was similar to that of Enlightenment thinkers who viewed it as the object of rational and scientific thought:

“If we look at the wanderer in Friedrich’s painting, he appears to be giving himself over to nature, and yet at the same time he is decisively isolated from it. And this indicates to us that the Romantic “deification” of nature, its enlargement into a metaphysical category results in a tendency leading toward the violation of nature just as much as the openly technicist viewpoint does. For there too in the background lurks the intention to call to account, to seek proof and persuasion, the desire for nature to become the likeness of humanity, to be the mirror of our soul. In a word, the desire for nature to be pliable to their conceptions of it—even if, in certain cases, these conceptions differ from those of the natural scientists.”

The quoted passage is from Földényi’s book, Dostoyevsky reads Hegel and Bursts into Tears. The book
consists of 13 essays in which the author seeks to examine “the experience of inscrutability to be found in depths of all cultural phenomena.” He is attacking the “belief in the omnipotence of reason that illuminates all phenomena” which he believes to be “the great inheritance of the Enlightenment”.

Hegel is a prime target.

The title of the book comes from an essay in which Földényi speculates that Dostoyevsky may have read Hegel’s lectures on the philosophy of world history while exiled in Siberia and writing The House of the Dead. Hegel viewed world history as having a rational purpose and argued that the character of some nations is such that they don’t belong within the purview of world history. He ruled out Siberia as a setting for world culture.

Dostoyevsky suffered greatly in Siberia but felt his estrangement from world history to be a form of redemption from the gray rationality of European civilization. Exile enabled him to obtain a better understanding of other Russians and of himself.

Hegel is also the target of criticism in the final essay which discusses Elias Canetti’s book, Crowds and Power.  Földényi discusses the difficulty of attributing a genre to this book, telling readers that it is distinguished by its openness to metaphysical questions - particularly the ancient question, “What is man?” - and a capacity for amazement at the world.

Földényi suggests that “Canetti almost appears to be sending a message” to Hegel. Canetti was disturbed by “the arrogance of concepts” and held examination of individual phenomena to be more important that generalizations. He claimed that the conceptual interested him so little that he had not seriously read either Aristotle or Hegel.

I am glad that we do not have to choose between the views of Hegel and Canetti. In Freedom, Progress, and Human Flourishing, I argue that although the roots of liberty run deepest in countries that recognize Western civilization as providing their cultural heritage, history gives us no grounds for complacency about the future of liberty in those countries.

The essay I found most illuminating is the one on belief in the devil. Földényi suggests that beliefs about God and the devil “took leave of their traditional metaphysical theater” toward the end of the 18th century. He illustrates the metaphysical theater with Goethe’s description of the demonic situation that Faust observed within himself of being torn between the sensual and the non-sensual. He suggests that Faust was “perhaps the last emblematic figure of European culture who … represented his own endangered mentality without losing sight of the Great Plan as envisioned by Pico della Mirandola.”

After that, Földényi claims that the “Good” lost its transcendental constraints and became limited to concepts of utility, advantage, and pragmatism, and “Evil” came to be understood as “anything impeding what general belief proclaimed as advantageous and useful.”

So, what was Pico della Mirandola’s Great Plan?  In the 15th century Giovanni Pico della Mirandola suggested that the goal of man - the reason God created humans - was to love the beauty of the world or to admire its greatness. However, man can do this in his own way. He can shape himself in whatever form he prefers. He can degenerate into a lower, more brutish, form of life, or “be reborn into the higher orders, those that are divine”.

It seems to me that the essence of the Great Plan can still be followed by those of us who are uncomfortable with the theology of Pico della Mirandola if we take care not to lightly dismiss intuitions that to be fully flourishing we need to transcend a focus on utilitarian considerations. My personal view is that such intuitions deserve to be taken seriously because they stem from fundamental aspects of human nature. Freedom, Progress, and Human Flourishing offers the suggestion that we may take pleasure in seeking to transcend utilitarian preoccupations “whilst rejecting the idea that it is appropriate to employ the metrics of pleasure and pain to assess the worth of our endeavors.”

I have selected only a few of Földényi’s essays to discuss here. Some readers might be interested to follow up his challenging views on melancholy and anxiety, or the sad story of Heinrich von Kleist who features as prominently as Hegel.

In my view, the author is successful in illustrating the poverty of rationalistic approaches in explaining cultural phenomena. However, in asserting that the Enlightenment is responsible for widespread belief in the omnipotence of reason, he is taking a Eurocentric view. Scottish Enlightenment thinkers certainly did not believe that reason could illuminate all phenomena. Modern followers of Frances Hutcheson, David Hume, Adam Smith, and Adam Ferguson are unlikely to feel that their views are under attack in this book.

Posted by Winton Bates at 4:33 PM No comments: