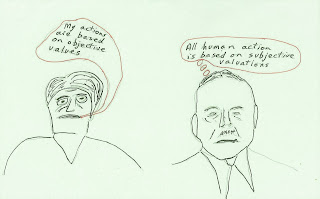 Readers who don’t recognise the faces depicted in my amateurish artwork might be thinking that the question is absurd because opposites can never be reconciled. That is a feature of the real world. However, subjectivism and objectivism are labels that have been attached to different schools of thought. We need to look at what lies behind the labels to assess whether the schools of thought can be reconciled.

I have previously struggled with related issues when considering whether human well-being is subjective or objective. I will return to that question later in this post.

Edward Younkins has little difficulty in reconciling subjectivism and objectivism in his excellent book, Flourishing and Happiness in a Free Society, 2011. The book is subtitled, Towards a synthesis of Aristotelianism, Austrian Economics and Ayn Rand’s Objectivism. The subtitle accurately summarises what the book is about. This is a scholarly work that should be read by anyone who has reasons to be interested in whether such a synthesis is possible. Readers of this blog will have observed that the approach to freedom and flourishing adopted here is eclectic, but strongly influenced by Neo-Aristotelian classical liberal philosophy and Hayekian economics. Ed’s reconciliation of objectivism and subjectivism goes part of the way in helping me to think about the coherence of my own views.

The Austrian economist to whom Ed devotes most attention is Ludwig von Mises. Mises observed that all human action involves choices that are made subjectively by individuals having regard to their internal purposes, ends or goals. Valuation reflects the acting person’s internal scale of preferences. Mises held that economists should study the implications of individual human actions without regard to their motives or causes, which are the objects of study for psychologists.

Ayn Rand argued that the minds of the individual humans are competent to achieve objectively valid knowledge of the real world. The senses, aided by reason in accordance with the rules of logic, enable us to obtain objectively valid knowledge of reality. When a correct cognitive process has been followed, it can be said that the output of that process is objective. It is up to individuals to discover what will further their own lives and what will harm them. Values reflect facts as evaluated by persons with respect to the goal of living. The objectivity of value derives from the fact that some actions tend to promote human life and others detract from it.

Ed Younkins points out that the claim of Miserian economists that values are subjective is compatible with Rand’s claim that values are objective because “they exist at different levels or spheres of analysis”:
“The value-freedom (or value-neutrality) and value subjectivity of the Austrians have a different function or purpose than does Objectivism’s emphasis of objective values. On the one hand, the Austrian emphasis is on the value-neutrality of the economist as a scientific observer of a person acting to attain his ‘subjective’ (i.e. personally-estimated) values. On the other hand, the philosophy of Objectivism is concerned with values for an acting individual moral agent himself”.

Ed provides a more complete explanation in his book, but the quoted passage is a good summary.

Did Hayek claim that morals are not rationally justifiable?

Ed’s reconciliation of Objectivism and the subjectivism of Austrian economists doesn’t get me off the hook entirely regarding the compatibility of Hayekian and neo-Aristotelian philosophies. A decade ago, after re-reading Rand’s warnings (via John Galt in Atlas Shrugged) about becoming “an abject zombie who serves a purpose he does not know for reasons he is not to question”, I re-considered my support for Hayek’s view that there is merit in observing long-standing norms of behaviour that serve purposes beyond our understanding.  My conclusion was that both views deserve consideration. Hayek was correct to emphasise that societal norms may deserve respect even if we don’t fully understand their purpose, because they evolved through an evolutionary process in which groups that adhered to superior rules were most successful. Rand was correct to emphasise that the purpose served by rules protecting lives, liberty and property are usually capable of being understood.

There are some passages in Hayek’s final book, The Fatal Conceit, that are incompatible with neo-Aristotelian philosophy (and my own views) but it seems likely that those passages were written by W.W Bartley, the book’s editor, rather than by Hayek, whose health was deteriorating at the time. For example: “Moreover, while it is true that traditional morals, etc. are not rationally justifiable, this is also true of any possible moral code …”. Bruce Caldwell suggests that the assertion that our morals are not rationally justifiable is “a position that clearly derives from Bartley” (Hayek’s Challenge, p 317). Here are another sentence for which I hope Hayek was not responsible:
“There is no reason to suppose that the selection by evolution of such habitual practices as enabled men to nourish larger numbers had much if anything to do with the production of happiness, let alone that it was guided by the striving after it” (The Fatal Conceit, p 69).

I think that statement is false. Without downplaying the importance of survival as a motive, a realist would acknowledge that until recently human reproduction has been largely an outcome of the actions of humans striving for happiness via the habitual practice of sexual gratification. Moralists have long argued that people can’t find happiness by seeking pleasure, but that doesn’t seem to have stopped many from striving to do just that. Furthermore, the literature of the distant past, as well as more recent times, suggests that those who were most successful in passing on their genes would generally have been living in societies providing relatively good opportunities for individual human flourishing, and they would generally have been flourishing individuals enjoying good health and relative prosperity. It also seems likely that persons with happy dispositions have generally been more likely to form lasting bonds and to care for their offspring.

The objective nature of human flourishing and happiness

Ed Younkins clearly views human flourishing as an objective state of life:
“Flourishing is a successful state of life, and happiness is a positive state of consciousness that flows from, or accompanies, a flourishing life. The legitimate function of every human person is to live capably, excellently and happily. This involves an ethic of aspiration toward one’s objective well-being that is actively attained and maintained”.

Ed introduces the concept of metalevel happiness to distinguish “enduring and justified contentment with one’s life as a whole” from transitory feelings. His description of metalevel happiness seems to have firm roots in antiquity:
“Metalevel happiness requires a proper perspective that comes from the serenity or peace of mind that one gets from knowing that: (1) one is free to rationally choose among alternatives; (2) a person’s potential for happiness is oriented in some particular way and with some particular nature which is not a matter of choice; and (3) nothing external can harm the core of one’s self. Serenity requires wisdom, a sense of proportion, and the ability to deal with pain and emotions in a balanced and rational manner. Happiness means being serene in the face of the unchangeable, courageous before the changeable, and wise enough to determine which is which”.

It seems appropriate to end this post here, leaving you to ponder how best to follow Edward Younkins’ good advice about cultivating the serenity required to be objective about subjective feelings.