What was Aristotle's secret of happiness? 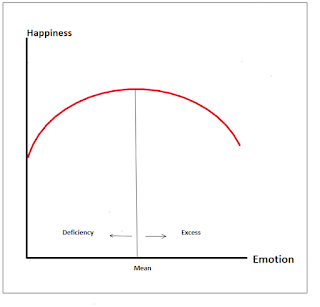 Aristotle held that being happy is the same as living well and doing well – it involves fulfillment of potentials inherent in each individual human. From this perspective, happiness is activity in conformity with virtue. It is acquired through practice in much the same way as one might learn an art or craft. Aristotle’s view rests on the view that emotions are not inherently good or bad. Virtue lies in avoiding excess or deficiency:
“For example, one can be frightened or bold, feel desire or anger or pity, and experience pleasure and pain in general, either too much or too little, and in both cases wrongly; whereas to feel these feelings at the right time, on the right occasion, towards the right people, for the right purpose and in the right manner, is to feel the best amount of them, which is the mean amount - and the best amount is of course the mark of virtue. And similarly, there can be excess, deficiency, and the due mean in actions. Now feelings and actions are the objects with which virtue is concerned; and in feelings and actions excess and deficiency are errors, while the mean amount is praised, and constitutes success; and to be praised and to be successful are both marks of virtue.” Nicomachean EthicsBook 2.

Aristotle acknowledged “happiness does seem to require the addition of external prosperity”, but he regarded notions that happiness can be identified with wealth, pleasure, health, honour or good fortune as superficial.


Aristotle’s view also differs from the modern view of happiness as a state of contentment, as satisfaction with life, or as the absence of symptoms of depression.


Many psychologists maintain that since Aristotle’s teachings on happiness were about ethics - how people should live their lives – they have little relevance to the question of what makes people happy. Subjective well-being research has been dominated by the view that happiness is about the balance between pleasant and unpleasant emotions. Even the use of life satisfaction, which has some cognitive content, has been grounded largely in utilitarian philosophy. More recently, some researchers have sought to introduce eudaimonic considerations by asking respondents about feelings of autonomy and competence, the quality of personal relationships and whether they feel that their lives are meaningful.


Aristotle would not have accepted a distinction between living a virtuous life and living a pleasant life. He maintained: “happiness is at once the best, the noblest, and the pleasantest of all things”. Similar views have been expressed by some modern philosophers. For example, Neera Badhwar writes: “the integration of emotional dispositions with intellectual (especially deliberative dispositions), which is required by virtue, makes virtue highly conducive to happiness, since a common source of unhappiness is conflict between our emotions and our evaluations” (Well-being, Happiness in a worthwhile life, p 152).


Can Aristotle’s view about the desirability of minimising the excess or deficiency of emotions be tested empirically? Some conditions need to be met before empirical testing is possible. First, we need a measure of human flourishing. In the absence of anything better, we might need to be prepared to accept some standard measures of life satisfaction, for example, as an indicator of human flourishing. Second, we need to be able to accept that the individual is an appropriate judge of “right feelings”, so that any excess or deficiency of emotion can be measured as the difference between right feelings and actual feelings. I’m not sure whether Aristotle would have accepted the second condition, but I don’t have a problem with it.


Some such testing has been reported in a recent article entitled ‘The Secret to Happiness: Feeling Good or Feeling Right?’  by Maya Tamir, Shalom H. Schwartz, Shige Oishi, and Min Y. Kim. The study was based on a cross-cultural sample of 2,324 participants from 8 countries around the world. The researchers used statistical analysis to explain happiness in terms of the discrepancy between desired and actual emotion. Their analysis controlled for experienced emotion, desired emotion and some other variables. They measured happiness both as life satisfaction and the absence of depressive symptoms. The analysis focused on four categories of emotion: self-transcending emotions (love, affection, trust, empathy, compassion); negative self-enhancing emotions (anger, contempt, hostility, hatred); opening emotions (interest, curiosity, excitement, enthusiasm, passion); and conserving emotions (calmness, relaxation, relief, contentment).


In accordance with the Aristotelian prediction people were happier when they felt the emotion they desired, even when that emotion was unpleasant.


“The secret to happiness, then, may involve not only feeling good but also feeling right.”


The authors note that their findings are consistent with two different interpretations: happiness is related to experiencing the emotions one desires, or happiness is related to desiring the emotions one experiences. In either case it may be reasonable to speculate that awareness of a discrepancy between desired and experienced emotion leads people to engage in struggles that make them unhappy – whether they are struggling to change their cognitions or their emotions.


What advice would Aristotle offer to a person who felt unhappy as a result of a discrepancy between desired and experienced emotion? Would he tell that person to obtain cognitive behavioural therapy (CBT) to help bring their emotions under the control of reason? He certainly emphasized the importance of practical reason, so he might have seen merit in CBT.


It is important to keep in mind, however, that the context in which Aristotle advocated “right” emotions was more about the nature of virtue than about the emotional benefits of self-control, even though he recognised the latter aspect. In modern terms, it seemed to me that Aristotle’s discussion of the virtue of emotional moderation translates to a discussion about values. The message I take is that to have lives worth living we need to look our values and to behave like the persons we want to become.
Posted by Winton Bates at 4:23 PM 1 comment: