Do people have a right to choose where they will live? 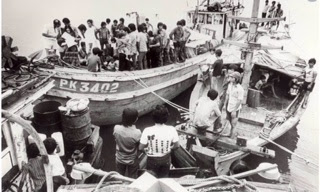 I have been pondering such questions while reading Ilya Somin’s recent book, Free to Move: Foot voting, migration, and political freedom. Somin presents a powerful argument in favour of foot voting – choosing to move to a different country, city, condo etc. because you prefer its rules to the ones you currently live under. Foot voting enables individuals to make a choice that actually matters to them, whereas voting in an election offers individuals only a miniscule chance of affecting the outcome.

I didn’t need to read Somin’s book to be persuaded of the potential value of foot voting. It would be difficult for an economist engaged in public policy not to be aware of those benefits. I also had the benefit of considering the issues involved many years ago when I read Robert Nozick’s famous book, Anarchy, State, and Utopia.

However, it is one thing to accept the potential benefits of foot voting as an ideal, and quite another to advocate removal of current obstacles to foot voting posed by migration regulations.

Somin suggest that the sovereignty argument – the view that the right to bar migrants is intrinsic to the existence of an independent nation state – has little support among political theorists, although it often arises in public discourse. Somin mentions Donald Trump and his southern border wall proposal in this context, but John Howard, a former Australian prime minister, advanced the argument just as strongly in 2001:

“National Security … is also about having an uncompromising view about the fundamental right of this country to protect its borders. It's about this nation saying to the world we are a generous open-hearted people, taking more refugees on a per capita basis than any nation except Canada, we have a proud record of welcoming people from 140 different nations. But we will decide who comes to this country and the circumstances in which they come.”

While national governments continue to exist, it would not be realistic to expect them to refrain from accepting responsibility for migration policy. However, that does not mean that it is beyond the realms of possibility for governments to adopt something more closely approaching an open borders policy. As Somin points out, sovereign nations existed for centuries without exercising a general power to bar peaceful migrants. Most governments made significant efforts to restrict entry only in the late 19th century.

The reason why the sovereignty argument seems persuasive to many people must be related to their perception that illegal or unauthorized migration has adverse consequences. They want immigration regulation enforced because they believe it serves a useful purpose.

Somin discusses in some detail various reasons that have been advanced for immigration restrictions. These include fear of terrorism and crime, possible reduction of wage levels, burdening of the welfare state, destruction of the environment, and the spread of harmful cultural values. He recognizes the validity of some objections to freedom of international migration, but suggests that “keyhole solutions” are available to meet negative side-effects of expanded migration. These keyhole solutions aim to target real problems, minimizing risks of adverse outcomes without imposing unnecessary restrictions on foot voting.

As in many other policy areas, carefully targeted regulation which minimizes adverse side-effects is clearly preferable to blanket bans and restrictions that are directed toward meeting political demands of anti-migrant nationalist groups. Somin recognizes that such groups are the main obstacle to international foot voting.

This brings me back to the sovereignty argument. It seems to me that anti-migrant nationalist groups had greater sway in Australian politics 20 years ago when significant numbers of people seeking refugee status were arriving by boat without prior approval. Under those circumstances it was relatively easy for the opponents of immigration to claim that “people smuggling” and “queue jumping” by refugees was likely to lead to huge social problems.

The government’s action to enforce regulation and discourage unauthorized arrivals seems to have enabled the public debate about immigration levels in Australia to become somewhat more civilized in recent years. It may also have reduced public disquiet about the relatively high migrant intake in recent years (prior to the Covid 19 pandemic).

The sovereignty argument is clearly opposed to recognition that people have a right to choose which country they will live in. Nevertheless, Australians seem generally to have become more relaxed in their attitudes toward high levels of immigration since the government stridently asserted sovereignty by taking effective action to discourage unauthorized arrivals.

The issue is whether there is any evidence to back up my assertion that Australians seem generally to have become more relaxed in their attitudes toward high levels of immigration since more effective action was taken to discourage unauthorized arrivals.

Survey evidence certainly suggests that immigration has gone off the radar as a major political issue in Australia over the last decade (Scanlan Foundation, Mapping Social Cohesion, 2020, p24).

The total number of migrants has increased, but there has been substantial opposition associated with the "somewhat more civilized debate" that I referred to. It now seems possible for people to argue for a lower migrant intake on grounds of pressure on infrastructure, impacts on unskilled wage, and house prices etc. without being accused of racism, or lack of sympathy for refugees.

The refugee intake has not risen much over the last decade. Unfortunately, there doesn't seem to be survey data on perceptions of whether the current refugee intake is too high or too low for long enough to assess whether attitudes have changed over the last decade. The Scanlan Foundation's report for 2019 suggests that in recent years opinion has been evenly balanced between those who say the intake is too small and those who say it is too large.

I think the Australian public would now be receptive to a larger refugee intake, provided people don’t arrive uninvited. However, that is just my personal view. I guess we will see whether or not I am right over the next year or so.

Posted by Winton Bates at 5:17 PM No comments:

What purpose is served by utopian thinking?

If your immediate response is that no good purpose is served by utopian thinking, it may be because you have the wrong kind of utopianism in mind. Perhaps what has come to mind is the description of an ideal society which could only exist if all humans were angelic, or perhaps it is the failure of some utopians to consider the human costs of attempting to achieve their visions.

Anyone who considers the nature and characteristics of an ideal society is engaged in utopian thinking. In my view, there is one particular type of utopian thinking that has contributed massively to advances in opportunities for individual human flourishing and has potential to continue to do so.

Before I make the case for that kind of utopian thinking, however, I need to discuss the rise of anti-utopianism.

The rise of anti-utopianism

The main threat to discussion of the characteristics of an ideal society seems to be coming from people who view such discussion as irrelevant to the world in which we live. These anti-utopians argue that it is a waste of time to consider whether public policy is consistent with principles that should apply in an ideal society. They see such ideals as irrelevant because outcomes are determined by power struggles.

Anti-utopians do not necessarily subscribe to the view that “might is right”. Their belief that outcomes are determined by power struggles may just lead them to argue that “right” is irrelevant. Their beliefs differ somewhat depending on whether they come from the conservative or progressive side of politics.

Anti-utopians who inhabit the conservative side of politics tend to focus on contests between nations. They argue that such contests are inevitable, and that victory depends primarily on the ferocity of the warriors. They sometimes recognize that religion and ideology have a role in motivating warriors by reinforcing nationalist sentiments. However, they tend to view notions of human rights and morality as “rationalizations of philosophers” that weaken the ferocity of warriors.

Anti-utopians who inhabit the progressive side of politics tend to focus on power struggles between different groups in society - different ethnic and religious groups, women and men, people with different sexual orientation, and so forth. People on the progressive side of politics have traditionally presented a view of an ideal society where everyone has equal opportunities as well as equal rights, but the anti-utopians engaged in identity politics seek affirmative action to be carried far beyond the provision of equal opportunities. Ethical principles are downplayed in the struggle of particular groups to advance their interests at the expense of others.

The purpose of utopian thinking

The best way to challenge the arguments of the anti-utopians is to present some defensible utopian views.

If you would like to see those points explained more fully, please read my recently published book “Freedom, Progress, and Human Flourishing”. The concept of utopia is only referred to a few times in the book but, as I have just realized, much of the thinking that went into the book is utopian thinking.

Posted by Winton Bates at 3:23 PM No comments: