Some readers might be wondering whether diaphysics has something to do with the views of L. Ron Hubbard. It doesn’t. If you thought it did you were probably confusing it with dianetics.

Diaphysics is the title of a book by Troy Camplin, an interdisciplinary scholar, poet and short story writer, who maintains the blog, Interdisciplinary World. The book was published recently by University Press of America. (I bought my copy from Amazon.)

Troy’s theory is that “a common thread” runs through the emergence from each level of complexity to the greater level of complexity that follows it. He is proposing “a mechanism for creation of more objects, and more complex objects and emergent orders of complexity ...”. “Evolution occurs such that the fitness landscapes evolve towards increasing smoothness ... . Once smoothness, or a new symmetry, is reached, a new set of fitness landscapes emerge with the emergence of the new, more complex level from the far-from-equilibrium state” (267).

It would be nice to think that there might be a common thread, that is not beyond my understanding, that could explain the evolution of complexity from the big bang to modern civilization. I am content enough, however, to be able to understand what Friedrich Hayek wrote about the relatively recent evolution of modern society:

“It is because it was not dependent on organisation but grew up as a spontaneous order that the structure of modern society has attained that degree of complexity which it possesses and which far exceeds any that could have been achieved by deliberate organization. In fact, of course, the rules which made the growth of the complex order possible were initially not designed in expectation of that result; but those people who happened to adopt suitable rules developed a complex civilization which then often spread to others” LLL, Vol. I, p 50.

Before I end this review I must commend Troy Camplin for the many nicely written passages in his book. For example: “ ... in a region of phase transition, in an edge-of- chaos regime, we have complex interactions, swirls and eddies, a combination of the predictable and unpredictable. In other words it is like a good story, which can be neither purely ordered and predictable nor disordered and unpredictable, but must have elements of both in order to be enjoyed” (272).

Troy’s book is not just an attempt to identify a common thread in our past. He also speculates about the future direction of human development. Diaphysics is probably the most ambitious book I have ever attempted to read.
Posted by Winton Bates at 12:04 PM 12 comments:

Email ThisBlogThis!Share to TwitterShare to FacebookShare to Pinterest
Labels: Why freedom?

What makes a planet happy?

I find it hard to take seriously the concept of a happy planet. Is Earth happier than Mars? How would we know? It seems to me that only sentient beings can be happy, but that might just reflect the limited perspective of a sentient being. For all I know a rock might have a completely different perspective.

The happy planet index constructed by the New Economics Foundation (nef) doesn’t actually attempt to compare the happiness of different planets. What it attempts to do is to assess how happy our planet is with what is happening in different countries. I hope that makes you smile because if you take the happy planet index too seriously I think you are at risk of becoming unhappy – and that might make the planet unhappy!

The countries that are given the highest ratings in nef’s index are Costa Rica, Dominican Republic, Jamaica, Guatemala and Vietnam. These places don’t seem to me to offer the ideal of a good life for the people who live in them, even though many of these people say they are satisfied with their lives.

The authors claim that the results show that a good life is possible without “costing the earth”. Andrew Norton has pointed out that the results do not support this conclusion. Average happiness levels are relatively low in several countries that are ranked among the top 50 in the happy planet index.

As defined by the nef the happy planet index is a productivity measure. The numerator (or output measure) is happy life years, measured by multiplying average life satisfaction levels by average life expectancy. The denominator (or input measure) is a linear function of the average “ecological footprint”, which is a measure of the total amount of land required to provide all resource requirements plus the amount of vegetated land required to absorb CO2 emissions.

The basic idea seems to be that “the planet” becomes happier when people in a particular country become happier without using more “land” or when people maintain their current happiness level while using less “land”.

My point is that the happiness of the planet only exists in the mind of the human who thought up the idea of the happy planet index. There is nothing wrong with trying to imagine what it would be like to be a planet that has feelings, but this is a game that anyone can play. Some people could imagine, for example, that the happiness of the planet will rise if more CO2 is produced. After all, CO2 is food for plants and planets like plants. Don’t they?

It would be possible for everyone on earth to have their own happy planet index that takes account of the things that they imagine that the planet might value. It would probably be preferable, however, to come down to earth and acknowledge that there is potential for everyone on the planet to vary in the extent to which they value various things that are important to them.

Is there an issue of respect involved in climbing Uluru? 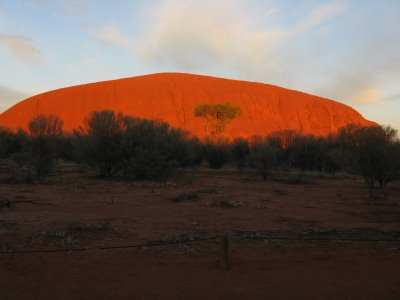 When I visited Uluru for the first time about 10 days ago I learned a little about its significance to the Anangu (western desert people) who are the traditional owners. A few days later, while we were driving home to New South Wales, the board of management of the Uluru - Kata Tjuta National Park released a draft management plan for 2009-2019 which raises, among other things, the question of whether visitors should continue to be allowed to climb the rock. The board was seeking comments from the public.

Before we got home, however, Kevin Rudd, Australia’s prime minister, had weighed in with the view that it would be “sad” if people were banned from climbing the rock. While citizen Rudd is entitled to express his views on anything and everything (as he does incessantly) I think it will be sad if his intervention closes off further discussion of this issue.

The significance of Uluru to Anangu is reasonably clear. They believe that as direct descendants of the ancestral beings who created the landscape at the beginning of time they are responsible for its protection and appropriate management. They also believe that they have a responsibility to safeguard visitors to their land. The main reason that traditional owners have given to discourage visitors from climbing the rock is the danger involved: “We feel great sadness when a person dies or is hurt on our land”. The draft management plan suggests, however, that an issue of respect may also be involved. It quotes Tony Tjamiwa: “That rock is really important and sacred. You shouldn’t climb it! Climbing is not a proper tradition for this place” (p 86).

What is the significance of Uluru to visitors? Some of the literature about it suggests that it has something to do with the size of the object – it is 9.4 kilometres in circumference and rises about 340 metres above the surrounding plain. That might seem big to those who think of rocks as large stones, but Uluru is actually a remnant of an ancient mountain. It is composed of sedimentary rock that has become heavily eroded over time.

Uluru is a natural object of great beauty. The explorer Ernest Giles described it as “ancient and sublime”. Giles, however, was not the first European to visit the rock. William Gosse got there first, in 1873, and named it Ayers Rock, after Henry Ayers (a South Australian politician who is most remembered these days for having had Uluru named after him).

Tourists have been interested in travelling to Uluru for over 60 years, with the first vehicular track being constructed in 1948 in response to this interest. In the early 1950s several motels and a camping ground were built at the base of Uluru. Increasing tourism resulted, in 1958, in the area that is now the Uluru – Kata Tjuta national park being excised from an aboriginal reserve. Traditional ownership of the park was recognized in 1985 under an agreement in which it was leased back to the federal government for 99 years.

Most visitors to Uluru presumably go there primarily in order to see Australia’s most recognisable natural icon first hand. Although climbing the rock has become something of a tradition, only about one-third of visitors now choose to climb. I imagine that fewer people would climb if it was made clear in the literature distributed to visitors that an issue of respect may be involved as well as concerns about safety.

It seems to me that this is the crux of the issue. Is there a way that it would be possible for visitors to be permitted to climb the rock that would be consistent with appropriate respect for this place?
Posted by Winton Bates at 9:41 AM 2 comments: