Do political partisans make credible assessments of the views of their opponents? 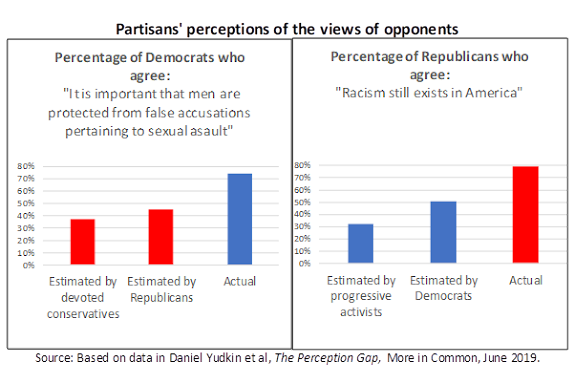 The charts shown above suggest that some of the assessments that political partisans make of the views of their opponents are wildly inaccurate. The probability that a Democrat will consider that men should be protected from false accusations of sexual assault is higher than Republicans believe it to be, and the probability of a Republican accepting that racism still exists is higher that Democrats believe it to be. The organization which published the data makes the point that Americans have much more similar views on many controversial issues than is commonly thought, especially among the most politically active. My focus here is on why partisans make such large errors in assessing the views of their opponents.

Probability assessment is not always easy.

Steven Pinker included “a sense of probability” in his list of 10 cognitive faculties and intuitions that have evolved to enable humans to keep in touch with aspects of reality (Blank Slate, 220). Individuals obtain obvious benefits from an ability to keep track of the relative frequency of events affecting their lives. A capacity to reason about the likelihood of different events helps them to advantage of favorable circumstances and to avoid harm.

Pinker points out that our perceptions of probability are prone to error, but Daniel Kahneman has a much more comprehensive discussion of this in Thinking, Fast and Slow. Kahneman points out that even people who have studied probability can be fooled into making errors in assessing probability when they are led to focus unduly on information that appears particularly pertinent and to ignore other relevant information. He gives the example of a cab involved in a hit and run accident in the city in which 85% of cabs are Green and 15% are blue. A witness identifies the cab responsible as Blue, and the court establishes that he would be able to identify colors correctly 80% of the time under circumstances that existed on the night of the accident. What is the probability that the cab is Blue? Most people say 80%, but the correct answer, provided by Bayes’ rule, is about half that (Loc 3005-3020). People tend to make a large error because they overlook the fact that a high proportion of Green cabs means that there is a good chance that the witness has mistakenly identified a Green cab to be Blue, even though his observations are accurate 80% of the time.

Kahneman notes that people are more likely to make errors in assessing probability when they “think fast” rather than analytically. However, it is not necessary to understand and apply Bayes’ rule to solve problems such as the one presented above. A simple arithmetic example can suffice. If there were 1,000 cabs in the city, there would be 850 Green cabs and 150 Blue cabs. If we had no more information, the probability of a Blue cab being responsible for the accident would be 15%. We are told the witness saw a Blue cab and would correctly identify 80% of the 150 Blue cabs as Blue (i.e. 120 cabs) and would mistakenly identify 20% of the 850 Green cabs as Blue (i.e. 170 cabs). The total number of cabs that he would identify as Blue is 290 (120+170). The probability that the witness has correctly identified a Blue cab is 0.414 (120/290) or 41.4%.

However, when people are presented with the second version, the answers they give tend to be much closer to the correct one. They apparently interpret the information that the Green drivers are responsible for 85% of the accidents to mean that the Green drivers are reckless. That causal stereotype is less readily disregarded in the face of witness evidence, so the two pieces of evidence pull in opposite directions.

Political partisans don’t have much incentive to make accurate assessments of the views of their opponents.

The potential for errors in fast thinking and the impact of cultural stereotypes may account for much of the error of partisans in assessing the views of their opponents, as shown in the above charts. People do not have a strong personal incentive to ensure that they accurately assess the views of their political opponents. Potential errors do not affect their income and lifestyle to the same extent as, say, errors in the probability assessments they make relating to personal occupational and investment choices.

In addition, political partisans may not even see any particular reason to be concerned that they may be misrepresenting the views of their opponents.

“Many conspiracy theories function more like associative partisan attitudes than markers of an alienated psychology”.

Extreme partisans tend to promote theories that discredit their opponents. Perhaps that is the way we should expect partisans to play politics in a society where many people think it is ok to “bear false witness” because they believe everyone has “their own truths” and objective reality does not exist.

We do not have to speculate that partisans are deluded or crazy when they hold firmly to improbable theories about their opponents in the face of contrary evidence. They are more likely to be ignoring the evidence to demonstrate loyalty to their party and its leaders.

However, that doesn’t offer us much solace. Some of the conspiracy theories currently circulating seem similar to the false rumors that governments circulate about their enemies during wartime. Extremists among political partisans may be circulating those rumors with the intention of promoting greater political polarization and a breakdown of the values that have hitherto made it possible for people with divergent views to coexist peacefully.

Much depends on the attitudes of the majority of people who currently disinclined to spread rumors that they believe to be false and likely to promote social conflict. If people with moderate views make known that they expect political leaders to disavow false rumors about their opponents, they can encourage that to happen. Leaders of the major parties have an incentive to try to attract voters with moderate views away from opposing parties. If leaders disavow false rumors, partisans will tend to echo their views.

Posted by Winton Bates at 2:37 PM No comments:

Does T S Eliot provide useful hints about the resilience of Western culture? 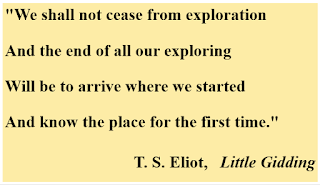 The quoted passage comes near the end of T.S. Eliot’s poem, Little Gidding, which was written in Britain during the Second World War. Eliot goes on to use vivid imagery to describe the beginning:

“At the source of the longest river

The voice of the hidden waterfall

And the children in the apple-tree

Not known, because not looked for

But heard, half-heard, in the stillness

Between two waves of the sea.”

The theme of the poem is:

“All shall be well, and

All manner of things shall be well”.

The author urges us to view history as a pattern of “timeless moments”. We celebrate those who died as a consequence of sectarian strife even though they were not “wholly commendable’. We do not celebrate them to “revive old factions”. We celebrate them because of what we have inherited and taken from them. They now accept “the constitution of silence” and are “folded into a single party”. They have left us with a symbol “perfected in death” that “all shall be well”.

The poem seems to me to offer hope for the future of Western culture, despite the author's experience of the “incandescent terror” of bombing raids while it was being written.

Eliot elaborates his views on culture in his book, Notes Toward the Definition of Culture. The first edition of that book was published in 1948, but he began writing it at around the same time as Little Gidding was published.

At one point, Eliot suggests that culture “may be described simply as that which makes life worth living” (27). He views culture as linked to religion: “there is an aspect in which we see a religion as the whole way of life of a people … and that way of life is also its culture” (31).

Eliot claims that it is an error to believe that “culture can be preserved, extended and developed in the absence of religion”. Nevertheless, he acknowledges: “a culture may linger on, and indeed produce some of its most brilliant artistic and other successes after the religious faith has fallen into decay” (29).

The author saw Western culture as already in decline at the time of writing, by comparison with the standards 50 year previously. Eliot “saw no reason why the decay of culture should not proceed much further” (18-19).

Although I am skeptical of such sweeping claims, I think Eliot makes an important point about the potential for cultural disintegration to ensue from cultural specialization:

“Religious thought and practice, philosophy and art, all tend to become isolated areas, cultivated by groups with no communication with each other” (26).

From my perspective, one of the most interesting aspects of this book is Eliot’s suggestion that “within limits, the friction, not only between individuals but between groups”, is “quite necessary for civilization” (59). In discussing the impact of sectarianism on European culture he acknowledges that “many of the most remarkable achievements of culture have been made since the sixteenth century, in conditions of disunity” (70). Perhaps disunity helped by encouraging artistic freedom of expression.

My reading of Notes Toward the Definition of Culture left me feeling optimistic that Western culture can survive the current culture wars. The culture wars seem to me to be akin the historical sectarian disputes between Catholics and Protestants.

Western culture has previously survived attempts of dogmatists to silence their enemies, so it can probably do so again.

Posted by Winton Bates at 9:29 AM No comments: