How can the traditional virtues help people to have the basic goods of a flourishing human? 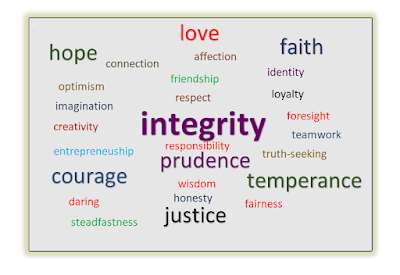 After setting out a few days ago to write about the origins of the concept of progress, I was re-reading portion of The Enlightened Economy, by Joel Mokyr, when my attention was diverted to the relationship between goodness and happiness. In discussing the meaning of the Enlightenment, Mokyr mentions Roy Porter’s characterisation of it as a gradual switch from asking ‘how can I be good?’ to ‘how can I be happy?’.  Mokyr suggests that pithy summary “captures perhaps something essential” (p 33). (Porter’s discussion is in The Enlightenment in England, 1981.)

I agree both with Mokyr’s endorsement and his equivocation. Darrin McMahon, in his book Happiness: A History (2006) noted the role of St Thomas Aquinas (1225 – 1274) in drawing renewed attention to the works of Aristotle and opening up a space in which some partial happiness can be achieved in this life.  Aquinas helped open the way for the subsequent attention given to betterment of material conditions of humanity by Enlightenment thinkers but, like Aristotle before him, he saw virtuous activity as providing the answer to human aspirations for both goodness and happiness. Many Enlightenment thinkers and, more recently, Neo Aristotelians, also see a strong link between virtuous activity and happiness.

The series of posts I have just completed about the basic goods of a flourishing human have obvious relevance to the question, ‘how can I be happy?’, but those posts don’t mention virtue explicitly. I could explain that in terms of the focus of those posts on societal institutions rather than personal development. However, my time could be better spent considering the role of virtue in helping individuals to attain the basic goods.

Ed Younkins comes to mind as a scholar who emphasises that human flourishing “comprises and requires a number of generic goods and virtues” whose proper application is unique to each person.
The role of the virtues in individual flourishing has been discussed at greater length by Douglas Den Uyl and Douglas Rasmussen in The Perfectionist Turn (2016). Those authors argue that the fundamental problem of ethics is taking responsibility for figuring out how to fashion one’s own life. Within the context of their template of responsibility, human flourishing is viewed as “the exercise of one’s own practical wisdom”. Integrity is the central virtue of that framework. The authors explain:
“Integrity expresses itself interpersonally in honor; but when applied to the agent herself, the term ‘integrity’ signifies a coherent, integral whole of virtues and values, allowing for consistency between word and deed and for reliability in action”.

Integrity explains how the basic goods, as I have identified them, are linked together as an integrated whole when a human is flourishing. Integrity is necessary for exercise of the wise and well-informed self-direction that, in turn, helps individuals to live long and healthy lives, maintain positive relationships, manage their emotional health, and live in harmony with nature.

Neera Badhwar, in Wellbeing: Happiness in a Worthwhile Life" (2014), offers a somewhat different perspective to that of Den Uyl and Rasmussen, but she reaches similar conclusions.  The central propositions Badhwar advances are that the highest prudential good (HPG) consists of happiness in an objectively worthwhile life, and that a person who leads such a life must be characteristically autonomous and reality-orientated.

Badhwar argues that virtue is of primary importance because it ensures the attitudes and actions that are necessary for happiness in a worthwhile life. She suggests that the integration of emotional dispositions with the practical wisdom required by virtue, “makes virtue highly conducive to happiness, since a common source of unhappiness is conflict between our emotions and our evaluations” (p 152). In other words, we can make ourselves unhappy by allowing transient emotions to distract us from acting in accordance with our values.

That brings us back to the importance of integrity to individual flourishing.

How does integrity relate to the traditional virtues of western society as they are understood in the modern world?
In considering that question I have consulted Deirdre McCloskey’s book The Bourgeois Virtues (2007).

Integrity isn’t listed specifically among either the four ancient cardinal virtues - prudence, courage, temperance and justice – or the three Christian virtues – faith, hope and love. McCloskey lists integrity as a sub-virtue of faith and, by listing honesty as a sub-virtue of justice, implicitly recognizes its connection to justice. However, integrity may be required for a person to acquire any of the virtues in a manner that is likely to enable her (or him) to do the right things, towards the right people, for the right end, and in the right way, and to take pleasure in so doing.

In order to explore that possibility, let us take a quick excursion to consider McCloskey’s perception of the virtues and what integrity involves in the context of each virtue.

Prudence (or practical wisdom):
McCloskey recognizes its importance, but is highly critical of the “prudence only” approach of schools of economic thought that have sought to equate individual flourishing with utility maximization.
In the context of practical wisdom, integrity implies reality-orientation, or a disposition to seek truth and understanding.

Courage:
McCloskey argues that courage needs to be balanced with temperance. She is somewhat critical of those who hold up the courage of ancient warriors as a relevant model for the modern world, but is also uneasy about the apparently lack of courage displayed by those in charge of a peace-keeping mission in Srebrenica in July 1995. She admires the courage of those who undertake new ventures and overcome fear of change.
Integrity helps people to act with the courage of their convictions.

Temperance:
McCloskey points out, for the benefit of confused psychologists, that it is temperance, not prudence, that is the virtue of controlling impulses. She notes that temperance is required to listen to customers and avoid temptations to cheat, as well as to save and accumulate wealth.
It is relatively easy for a person to decide to become more temperate in some contexts, but integrity is required to stay on course.

Justice:
McCloskey notes that just conduct involves, among other things, respect for property honestly acquired, paying willingly for good work and breaking down privilege.
Integrity is closely connected with justice, because both integrity and justice require individuals to be honourable and trustworthy in their dealings with others.

Faith:
McCloskey suggests that the relevance of faith is not confined to people who have religious beliefs. In support, she quotes Stephen Barr, a physicist, who suggests that when we ask questions about the real world, we have faith that those questions have answers. She also explains the connection between faithfulness and integrity, in the context of adhering to one’s commitments. She notes the Aristotelian tradition of ethics as a matter of habit and character, and Adam Smith’s account of the role of the impartial spectator, as a behaviourally instilled internal voice of conscience.
It seems to me that integrity is also required as mature individuals exercise their personal responsibility to decide whether an annoying spectator, that was installed within as a default setting during their childhood, is consistent with their own values.

Hope:
McCloskey writes: “Hope is of course essential for eternal life, and for humdrum life, too, as one can see from the lethargy that comes over a human who, as we say, ‘has nothing to look forward to’.” Hope involves expectation as well as a wish for something good to happen.
Integrity helps steer us toward realistic optimism and away from the hazards of wishful thinking.

Love:
McCloskey is critical of major schools of thought within economics that have viewed love in the same way as other goods, by putting the beloved’s utility into the lover’s utility function, along with ice cream etc. She points out that this implies prudence only, and is contrary to the approach of Adam Smith, the founder of economics, who recognized that people seek a balanced set of virtues, including love. Smith wrote approvingly about benevolence and of “the great law of Christianity” requiring us “to love our neighbour as we love ourselves” Theory of Moral Sentiments, 1759, 25 (5).
Integrity is required to ensure that love offerings are made with a pure heart and not subsequently confused with obligations for provision of reciprocal benefits.

Bottom line
Traditional virtues can help us to be both good and happy, but we require integrity if we are to do the right thing, at the right time, and for the right reasons.

I am really happy to read your traditional virtues helping the system of people to have the basic goods of a flourishing human. It is one of the part of the importance of traditional Enlightenment Is for Dummies which is conceived that human reasoning could discover the truth about the world, religion, and politics. It is a role to improve the lives of mankind.