What is the price of civilization? 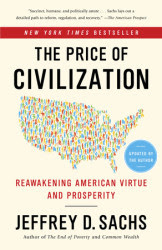 According to Jeffrey Sachs, in his new book ‘The Price of Civilization’, the United States needs an increase in tax revenue equal to about 6 percent of GDP in order to balance the budget and ‘pay for civilization’. He arrives at this figure after making allowance for some cuts in government spending and increases in spending of about the same magnitude in areas such as education, training, childcare, infrastructure modernization and foreign aid.

Jeff Sachs asks himself a ‘crucial question’: ‘how do Canada, Denmark, Norway, Sweden, and other countries manage to educate their young, fight poverty, modernize their infrastructure, enjoy life expectancy well above America’s, and still maintain a budget that is more in balance than America’s?’ He concludes: ‘The answer, of course, is that the other countries tax their citizens more heavily in order to supply more public goods, including in the case of the Scandinavia, universal access to health care, higher education, and child care and support for families with young children’.

I was surprised to see that America now has a bigger government than Australia. This must have something to do with the relatively poor economic performance of the US over the last couple of years. It certainly can’t be attributed to any recent cuts in government spending in Australia.

But let us not get side-tracked by the trivia of short-term movements in GDP. There is a fairly clear implication in what Jeff has written that he thinks Australia must be uncivilized because tax revenues as a share of GDP are relatively low in this country.

Nevertheless, I think Jeff may have a point. I don’t want to undermine the efforts of Australia’s foreign minister to portray us as civilized people, but it is a difficult case to make. Australians generally make little effort to even appear to be civilized. Most of us require very little lubrication before singing our national song, which is a eulogy to a hobo who steals sheep. With very little more lubrication many of us can be encouraged to sing an advertising jingle we learnt as children, that identifies us ‘as happy little Vegemites, as bright as bright can be’. In this instance it may be equally true that ‘what we identify with establishes our identity’ and that ‘we are what we eat’!

More seriously, perhaps, it is difficult to argue that social outcomes in Australia are up to the standards that might be expected of a civilized country. Australia’s rating according the UN’s human development index (HDI) is only 0.937, just 6 percent higher than that for Sweden. When inequality is taken into account, our performance is even worse – a rating of 0.864, just 5 percent ahead of that for Sweden. Average life expectancy at birth in Australia is only 81.9 years, just a few months ahead of Sweden. Australians only spend about 12 years at school on average, again only a few months more than Swedes. In the few years Australians do spend at school, they don’t actually learn much. Not only are our PISA scores well below those in Shanghai and Korea, they are only slightly higher than those for Sweden.

I hope that anyone from Sweden reading this has a sense of humour. My real point is not that Sweden is uncivilized – just that it is not high levels of taxation that make Sweden a civilized country. Those who argue that Sweden is civilized because it has a big government should consider how they would respond to the view that Sweden is civilized country because it generally adopts market-friendly policies. According to the Heritage Foundation’s measures of economic freedom, Sweden’s policies are more market-friendly than those in the United States in relation to business, trade, investment, finance, monetary policy and corruption - just about all aspects of policy other than size of government and the labour market.

The general point I have been trying to make (in case anyone has missed it) is that it doesn’t make much sense to equate civilization with the size of government. Social outcomes in high-income countries with big governments tend to be fairly similar to those of high-income countries with smaller governments. It is possible to provide a decent social safety net, without huge levels of taxation if benefits are means tested. I have provided some references to research on this topic in a paper I wrote last year for New Zealand’s 2025 taskforce (‘How much does size of government matter for economic growth?’, 2010, p11).

I started off to review ‘The Price of Civilization’, but I haven’t progressed very far. The recommendation for higher taxes is probably the most important recommendation in the book – and it is the issue raised in the title – but that is only part of what the book is about. In particular, the book contains an interesting discussion about what is wrong with American politics, which I will consider in a later post.
Posted by Winton Bates at 3:15 PM