What does "A Dream of Red Mansion" tell us about place-seeking culture in China? 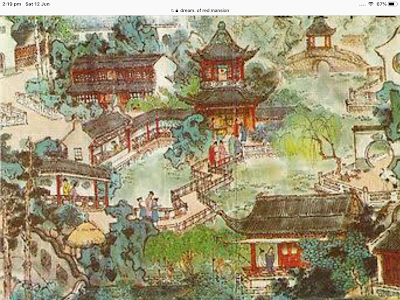 A Dream of Red Mansion, which was written by Cao Xuequin in the 18th century, is often claimed to be China’s greatest classical novel. The book is sometimes also referred to as Dream of the Red Chamber, or The Story of the Stone.

After reading the novel it is easy for me to see why it is considered to be a great novel. It is impossible for translations to capture everything conveyed by Chinese characters but even in translation (I read Gladys Yang’s version) this is one of the best novels I have read.

What is the book about?

The book is about many aspects of life of a wealthy aristocratic family living in the Chinese capital. It follows the life of the central character, Jia Baoyu, through childhood to early adulthood. Baoyu spends most of his time playing with girls – his cousins and servants. He is spoiled by his mother and grandmother, but is frequently reprimanded by his father.

In terms of broad structure, the novel is about destiny – the story of a piece of jade, with prophetic inscriptions, that miraculously appears in Baoyu’s mouth at the time of his birth. The novel is also a story about love and arranged marriage. While suffering from some kind of mental illness, Baoyu is fooled into thinking he is being married to the person he loves during the ceremony in which he is being married to a different person.

One of the features of the novel is the author’s obvious admiration of girls and young women. Baoyu’s cousins have greater skill in composing poetry than he does, and provide the competition he needs to improve his performance. The novel suggests that females in the Jia household had somewhat idyllic childhoods, but were at great risk of suffering from heartbreak, disease (particularly TB) and early death, or from spousal abuse if they survived long enough to have a marriage arranged for them.

The novel is also a story about the role of place-seeking in a family of government officials whose fortunes were declining. In that context, Baoyu is under pressure from his father to study hard and to learn to write essays in a manner that will enable him to perform well in the imperial examination. Baoyu, however, is more interested in engaging in poetical activities with his female cousins. Those tensions were of particular interest because of the role of civil service examinations in China’s place-seeking society.

By comparison with Western Europe, in China the accumulation of wealth over several generations seems to have depended to a greater extent on securing an official position and maintaining favor with government authorities. Emperors of China seem to have been more readily able to confiscate the property of wealthy people who fell out favour than were the kings of Western Europe, who often had to share power with barons and popes.

I turned to Linda Jaivin’s book, The Shortest History of China, for background information about place-seeking in China. In writing about the Tang dynasty (618-907), Jaivin emphasizes the links between inherited wealth, education, and official position:

Civil service examinations did not remain a constant feature of government in China during subsequent centuries. They were effectively abolished during the Yuan dynasty, following the Mongol invasion. During that period, top appointments went to Mongols and were made hereditary.

During the Manchu Qing dynasty, the civil service examinations were upheld by Emperor Kangxi (1662-1722) who had studied the Confucian classics as a child. The tradition was continued through the reign of his grandson Qianlong (r. 1735-1796). It was during that period that Cao Xuequin wrote A Dream of Red Mansion.

Baoyu’s father, Jia Zhen, did not expect Baoyu to perform spectacularly at the imperial examinations. When he saw that Baoyu was not fond of study, but had some understanding of poetry, he decided that this “did not really disgrace their ancestors; for they themselves, he recalled, had been the same, and although working hard for the examinations had never distinguished themselves”.

However, that didn’t stop Jia Zhen from threatening his son with dire consequences if he did not study hard:

“I’ve also heard that you spend all your time in the Garden playing about with your girl cousins and even fooling about with the maids, forgetting your studies completely. You may write a few lines of poetry but it’s not up to much, nothing to boast about. After all, when you come to take the examinations, it’s essay-writing that counts; but you’ve neglected that. Here’s what you’re to do from now on. Stop versifying and writing couplets, and concentrate on studying eight-section essays. I give you one year. If you’ve made no progress by the end of that time you can stop studying, and I shall disown you!”

Baoyu loathed the eight-section essays, “taking the view that as these were not written by sages or worthies they could not expound the wisdom of sages or worthies and were simply ladders by which later examination candidates climbed up to bureaucratic advancement”. He had a low opinion of place-seekers. In commenting on his meeting with a person who had a strong physical resemblance to himself, Baoyu says:

“He talked and talked but said not a word about seeking for truth, just holding forth on scholarship and the management of affairs, as well as loyalty and filial piety. Isn’t such a person a toady.”

Baoyu was fond of the Zhuangzi, one of the foundational texts of Taoism, which tends to promote carefree attitudes. In Chapter 21 of the book he is delighted by a passage suggesting the existence of some weird paradoxes, for example that “all men under heaven will learn skill for themselves” if the fingers of deft artisans were to be cut off.

By the time we reach Chapter 118 of the book, as the examinations are approaching, Baoyu disturbs his family by hinting that he intends to renounce the world. At that point, he is absorbed in reading the chapter “Autumn Water” in the Zhuangzi. The author does not tell us what passage he is reading. Perhaps it is the passage about what the “truly great man” does:

“He struggles not for wealth, but does not lay great value on his modesty. … The ranks and emoluments of the world are to him no cause for joy; its punishments and shame no cause for disgrace. …”

When his wife, Baochai, sees what Baoyu is reading she takes this to mean that he is seriously considering “leaving the world of men” and giving up all human relationships. This leads them into a heated exchange in which Baochai emphasizes Baoyu’s responsibility to his family. The exchange ends with Baochai giving some final advice:

“Since you’ve run out of arguments, my advice to you is to take a grip on yourself and study hard; because if you can pass the triennial examination, even if you stop at that, you’ll be paying back your debt of gratitude for your sovereign’s favour and your ancestor’s virtue.” Baoyu nodded and sighed, then said, “Actually it isn’t difficult to pass. And what you said about stopping there and repaying my debt is not far wide of the mark.”

Baoyu does study hard. He performs exceptionally well at the imperial examination and then disappears to become a Buddhist monk. The emperor decrees that the brilliance of Baoyu’s writing must be due to his being an immortal, and the whole household is overjoyed.

The struggle that Baoyu experiences in coping with parental expectations is no doubt heightened by the Confucian culture in which he lives. However, individuals can feel conflict between their personal values and a desire to meet the expectations of parents even when they grow up in a culture with little reverence for sovereigns or ancestors. The novel can be read as an account of how a young man was eventually able to reconcile his Taoist values with the Confucian culture in which he lived. As I see it, the novel has wider relevance as a story about personal development and the need for individuals to take responsibility for directing their own lives as they approach adulthood.

Posted by Winton Bates at 11:56 AM No comments: