What are the policy implications of widening productivity diffusion gaps?

When I read the suggestion in the foreword of the OECD’s recent publication The Future of Productivity that governments should be “reviving the diffusion machine” to “promote inclusive growth” my initial reaction was that the OECD would have a difficult task persuading me that markets could not deal with diffusion of new technology without government help. However, it turned out that I had grasped the wrong end of the stick. The OECD researchers have been investigating whether diffusion gaps might be linked to government policy failures. Reviving the diffusion machine involves, among other things, reducing government regulation that prevent markets from functioning efficiently.

The growing diffusion gap in OECD countries is shown in the graphs below. The graphs have been reproduced elsewhere, including by Timothy Taylor, the conversable economist, but they deserve to be widely published. 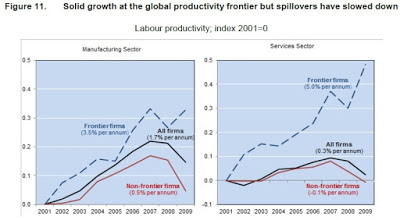 The frontier firms are the top 100 firms in terms of productivity levels in each year. These firms are from a range of different countries and many are very much global firms. The data for non-frontier firms is the average of all other firms. Charts for multi-factor productivity show a similar pattern. See the supporting paper by Dan Andrews, Chiara Criscuolo and Peter Gall, Figure A2.

The graphs suggest that productivity growth at the global frontier has remained relatively robust, despite the slowdown in productivity growth in many OECD countries during the 2000s (as previously discussed on this blog). It is interesting that the productivity divergence between top performers and the rest began to widen prior to the financial crisis. That is particularly evident in the case of service sector firms.

The authors acknowledge that the productivity gap is consistent with winner-take-all dynamics or “superstar effects” as well as slower diffusion of new technologies. However, the former explanation is discounted because the divergence is not confined to the ICT sector where winner-take-all dynamics might be expected to be most important. For a discussion of this point by Dan Andrews see the video of the launch of The Future of Productivity at the Petersen Institute (Dan’s response to the relevant question is near the end of the session).

Regression analysis suggests that the ability to learn from the global frontier is stronger in economies that are more open to international trade and more integrated in global value chains (GVCs). The productivity of national frontier firms is negatively influenced by cumbersome product market regulation, and positively influenced by quality of education systems, R&D subsidies, closer R&D collaboration between business and universities, and stronger patent protection. In some economies where national firms have productivity that is close to the global frontier, the impact of those firms on national productivity is muted because they are undersized. The difference between the size of national frontier firms and global frontier firms tends to be smaller in industries with higher job layoff rates, less stringent employment regulation and bankruptcy laws that do not overly penalize failure.

The growth of innovative firms is restricted by high rates of skill mismatch in many countries.  The authors suggest that skill mismatches can be exacerbated by high transactions costs in housing markets (e.g. stamp duties) and bankruptcy legislation that leaves people with valuable skills employed in zombie firms.
The report suggests:
“It is important that young firms either grow rapidly or exit but no longer linger and become small-old firms”.

That set off alarm bells in my mind. What the authors meant to say, presumably, is that governments should reform regulation that assists low-productivity firms to hold resources that could be used more efficiently elsewhere. The idea that young firms should grow rapidly or exit brought to mind memories of the phrase “get big or get out”, coined by an Australian agricultural economist in the early 1970s, and used by industrious bureaucrats and politicians to justify questionable interventions in the normal functioning of credit markets.

A question some of my readers might be asking themselves at the moment is how well Australia scores in relation to the policy variables noted above. The question is not easy to answer because Australian data is not included in some parts of the analysis.

The fact that some of Australia’s policies look relatively good by comparison with OECD averages is hardly grounds for complacency.  OECD averages are heavily influenced by some of the most sclerotic economies in the world which have had woeful productivity performance over several decades.
Posted by Winton Bates at 7:30 AM