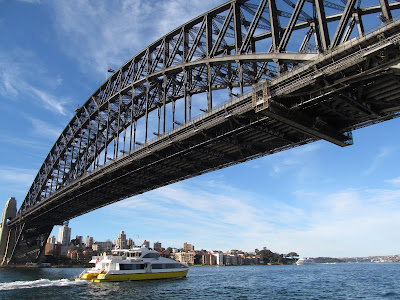 International competitiveness is a useful concept to apply to cities that are competing globally. Major cities are in competition to attract people with scarce skills and entrepreneurial ability, and to maintain reputations as attractive places for people to do business, invest, innovate and develop skills.

Liveability is important, but it does not encompass everything that is important. International competitiveness also involves natural advantages - including location, human resources and business culture - the regulatory environment and the efficiency of organisations providing infrastructure and other services.

Unfortunately, there is probably as much room for confusion in writing about the international competitiveness of cities as there is in writing about the international competitiveness of industries. Advocates of various industry interest groups in Australia have sometimes argued that they need tariff protection, import quotas, subsidies and tax concessions in order to become internationally competitive. I have the impression that such advocacy has diminished in recent years, but that might be because it is now a long time since I was paid to listen to it. The important point is, of course, that internationally competitive industries should be able to thrive without government assistance.

Similarly, the representatives of particular cities sometimes argue that they need central government assistance to fund infrastructure that will help make them internationally competitive. The merits of such claims are particularly difficult to assess in Australia, given overlapping responsibilities for funding of federal, state and local government activities. Nevertheless, the point stands that within a sensible funding framework, internationally competitive cities should be able to thrive without central government subsidies to fund infrastructure.

Another potential problem in talking about the international competitiveness of cities is that some people will assume that if a city is lacking in some aspect of competitiveness this can be remedied by more intensive planning and regulation by an ‘entrepreneurial state’. We don’t hear the term ‘Australia Inc.’ so often these days, but it is not difficult to find academic commentators who have faith in the ability of governments to perform entrepreneurial miracles. The recent contribution of Roy Green, Ian Marsh and Christos Pitelis to the CEDA publication ‘Australia’s Future Workforce?’ comes to mind in this context.

My interest in the international competitiveness of Australian cities was aroused by a couple of other contributions to the CEDA publication (which I have previously written about here).  Steven Callander makes the point that Australia needs liveable cities in order to be good at innovation:
“Turning a city into a great place to live is often taken as an end in itself, and in many respects it can and should be. Yet it is also a starting point for innovation. … Moreover, the benefits are widespread: When a city becomes a ‘brain hub’, jobs for plumbers, teachers, nurses and other local services are created at a rate of five to one over other cities, raising salaries and standards of living for all. A more liveable city attracts knowledge workers who affect change that makes the city ever more liveable”.

Fiona McKenzie makes the point that growing population is likely to add to costs of urban congestion with increasing city density placing more pressure on infrastructure, the environment and the social fabric of cities.

Sydney is generally ranked fairly highly as a global city. With regard to liveability, The Economist ranks Sydney in 7th place, behind such cities as Melbourne and Toronto; Hong Kong is 31st, Singapore and San Francisco are 52nd, London is 55th and New York is 56th. Sydney is ranked 10th in Mercer’s quality of living index, behind Vienna, Zurich, Auckland, Munich, Vancouver, Dusseldorf, Frankfurt, Geneva and Copenhagen. Singapore is in 26th place in this index.

Sydney also ranks fairly highly in indexes that cover a wider range of aspects relating to competitiveness. A T Kearney’s Global Cities Index ranks Sydney as currently in 15th place, with prospects of rising to 11th place. These indexes are intended to measure global engagement and cover business activity, human capital, information exchange, cultural experience and political engagement. The current world leaders are New York, London, Paris and Tokyo, but those cities are expected to be overtaken by San Francisco and joined by Boston in the years ahead. A T Kearney’s current rankings put Sydney behind Singapore and their prospective rankings put Sydney ahead of Singapore.

Sydney ranks in 11th place in the Global Urban Sustainable Competitiveness Index (GUSC) which covers economic dynamism, social cohesion, environmental quality, cultural diversity, technological innovation, global connections and government management. The world leaders according to this index are London, New York, San Jose, Paris, Hong Kong, Seoul and Tokyo. Singapore is in 12th place. It is worth noting that the rating given to Sydney by the GUSC is 0.698, far below London’s rating of 1.000.

The other index I have looked at is PWC’s cities of opportunity index, which ranks Sydney in 9th place behind London, New York, Singapore, Toronto, San Francisco, Paris, Stockholm and Hong Kong. Sydney’s overall rating is equal to 89.4% of the highest overall rating (London’s). The graph below suggests that Sydney’s competitiveness in relation to the PWC’s indicators varies from world best to being a long way from world best. (The best performing cities in the world are shown in brackets). 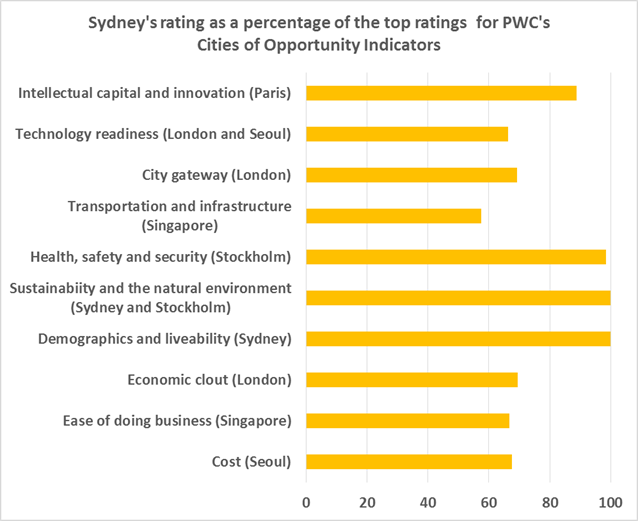 In some instances where Sydney’s performance is relatively poor, this is attributable to natural disadvantages. But poor policy performance has contributed to Sydney’s relatively low rating on some indicators, including transport and infrastructure. For example, Sydney’s performance in terms of numbers of licensed taxis relatively to total population is abysmal. Perhaps Uber might make it easier for people to get around in Sydney in future, provided it is not excessively taxed and regulated to protect the incumbents.

Unfortunately the competitiveness indexes I have looked at do not provide a very clear picture of how Sydney stands relative to cities in other parts of the world in terms of restrictions on economic freedom associated with regulation of incumbent service providers and artificial scarcity created by land-use regulation. A recent article by Brink Lindsey suggests that such regulation constitutes ‘low- hanging fruit’ that could readily be picked in the United States if politicians become interested in lifting economic growth.

The general impression these indexes give me is in that Sydney is in some respects already an internationally competitive city. Sydney may not have what it takes to become a major centre for software development, like San Francisco or Boston, but it has good prospects of becoming a major centre for highly innovative service sector activities in the Asia-Pacific region. The main downside risk, in my view, comes from powerful interest groups opposed to increases in population density and innovations that have potential to reduce the cost of transport, including congestion costs.

By reading through this article i could make out that sydney is already in the ring of internationa compettion. The list of ranks that you have given for different parameters gives me a clear clue that sydeny is one of the top competitors internationally. Towards the later part of the article i also got some sense that sydeny also have some blackholes to be filled.
For Bhutanese, Australia and particularly Sydney is a dreamland. Even for me, it is a dreamland and i have no idea how it is sailing in terms of infrastructure and the liveabiity as you have mentioned.
Development is rapid with teschnological advancement. It is important to be innovative and proactive for the cities to compete with others. I think the sense of competiton is always good as it drives the whole system forward with lots of expectations.

Thanks for your comment, Yeshi.
It is interesting that you say that Australia is a dreamland for people like yourself. Bhutan is a dreamland for many people in Australia. People are very interested when I mention that I have had a chance to visit your country in which great emphasis is place on happiness and regard for the environment.
Indeed, though Sydney is a much more pleasant place to live than in many other major cities in the world, it is very good for people who live in major cities to take a holiday now and then in a place like Bhutan in order to recharge their emotional batteries.

Isn't Sydney already internationally competitive? We've got lots of people who immigrate and come to live in the inner west and all parts of the city already.

It isn't hard to attract migrants, Mark. It is harder to attract people with the technical and entrepreneurial skills required to promote economic growth.