Does voting just encourage them? 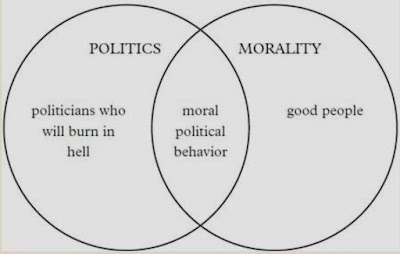 A couple of weeks ago the thought struck me that it was about time I wrote something about the personal ethics of voting. That turned out to be more difficult than I had anticipated.

At first, I thought that I should argue that it is unethical to vote because politics is a dirty business. As a person who often espouses principles of libertarianism and decentralism (see the preceding post on this blog) I see voting as akin to online shopping with known fraudsters – you know that the package of goods they deliver will never be the same as the one you thought you were buying. You should avoid shopping with known fraudsters, and you should avoid voting because whoever you vote for a politician will be elected.

Then I thought of some problems with that analogy. What happens if you really need the goods that the politicians are advertising? Who will mend the potholes in your road if you don’t vote for a politician who promises to get it done? Perhaps you might tell me that you and your neighbours could organise a working bee and do it yourself. Good idea!

When my reasoning took me to that point, I couldn’t immediately think of an appropriate response. That was when I decided that to bring clarity to my mind I should read again the book, “Don’t Vote – It just encourages the bastards”, by the late, great P J O’Rourke.  My discussion of the book provides only a small sample of the humor and wisdom in it. Despite having been written over 12 years ago, the book contains insightful comments about people who are still on the political stage in America, including Donald Trump. However, that is somewhat tangential to the focus of this article.

You might think that this book would make a strong case against voting, but the old saying about not judging a book by its cover does seems to apply in this instance. O’Rourke suggests that voting does have a purpose: “We vote to throw the bastards out”.  The problem, as I see it, is that when enough voters manage to persuade each other to vote to throw politicians out of office, that doesn’t establish a regime of peaceful human flourishing without any interfering politicians. Voters throw out one lot of politicians by voting another lot into office.

One of the funniest parts of the book is a listing of the personality characteristics of people who are drawn to politics. The first item on the list is “A pervasive pattern of grandiosity”. After listing 9 other characteristics, O’Rourke acknowledges that he has just quoted from the American Psychiatric Association’s diagnostic criteria for narcissistic personality disorder.

Nevertheless, O’Rourke acknowledges that “individual politicians are, after all, individuals like the rest of us and should be judged individually”:

“It would be wrong—very tempting, but wrong—to think of them all as simply bastards”.

Unfortunately, I must agree. The politicians I have met personally have all been likeable. When you meet them, they seem to be pleasant people (perhaps in the same way that the scammers who seek my friendship on Facebook often seem pleasant). A few politicians I have met even had their hearts and heads in the right places. The one who comes to mind most readily is Bert Kelly, an Australian politician whom I have written about previously.

Sometimes when I see a politician performing on TV, I wonder how a nice person like her, or him, ended up like that – I mean, like a bad actor saying things they don't believe. The fact that their future political careers are at stake is no consolation.

Is there something inherently evil about politics? O’Rourke writes:

“Maybe politics is inherently evil. Maybe politics is so evil that anything we do for it, even attempting to supply it with morality, just feeds the beast. I trust this isn’t true but I can’t say the thought doesn’t trouble me.”

That thought troubles me, too.

In his discussion of morality in politics, O’Rourke introduces (on page 88) the Venn diagram, reproduced at the top of this article. He drew the two circles to intersect, implying that there can be such a thing as moral political behavior.

It seems to me to be appropriate to maintain some optimism about democratic political processes. They don’t do much to protect our liberty and pursuit of happiness, but not many of us would freely choose to live under any of the available alternative forms of government. Many people claimed that democracy could not exist as a permanent form of government because it would not take long for citizens to learn that they could vote themselves largesse out of the public treasury. Indeed, that is largely what democratic politics has been about for as long as it has existed. Yet democracy survives! Perhaps democracy’s secret of success has been the existence of sufficient voters and politicians who have been willing to stop playing politics when crises have become imminent.

I often wish that I could be apolitical, but O’Rourke has persuaded me that is not practicable:

“The democratic political process is like the process of our children going through adolescence. There’s not much we can do to improve it and there’s nothing we can do to stop it. We cannot, however, just declare ourselves to be apolitical any more than we can declare ourselves to be “aparental.” Here are the car keys, son. Dad’s stash is in the nightstand drawer. Why don’t you take my ATM card while you’re at it? See you when you’re thirty.”

It certainly appears that there is not much that we, as individuals, can do to change the outcomes of the political process. The chance that your vote will be decisive is miniscule. But people do talk about politics and influence one another about how they will cast their votes. Paradoxically, even those of us who would like to be apolitical can make a difference if we decide that we don’t like the direction that politics is taking and choose to vote.

Before concluding, I should offer a personal explanation about the relevance of the personal ethics of voting to me, as a person who lives in a country where voting is compulsory. It is possible to choose not to vote in Australia without displaying a great deal of courage. It is possible to attend a polling place, chat with your neighbours, eat a “democracy sausage”, exchange greetings with people offering “how to vote” literature, have your name ticked off on the voting roll, be handed voting papers, and still not cast a valid vote. In a secret ballot, no-one knows what you write on the voting papers before you put them into the ballot boxes.

When I began writing this article, I was not sure whether I would end up persuading myself to vote, or to have nothing to do with the political process. P J O’Rourke helped me to persuade myself that there is such a thing as moral political behavior.

Democratic politics is certainly a dirty business. It doesn’t do much to protect liberty or the pursuit of happiness, but most of us would choose to put up with democratic immorality rather than to live under any of the currently available alternative forms of governance. Paradoxically, the survival of democracies may be attributable to the willingness of sufficient numbers of voters and politicians to refrain from playing politics – to stop raiding the public treasury - when crises become imminent.

Although the chances of an individual vote being decisive are miniscule, individuals do influence one another in how they cast their votes. Individuals who don’t like the way politics is heading are more likely to improve outcomes if they choose to vote and encourage other like-minded people to do likewise, rather than choosing to refrain from having anything to do with the political process.