What is the best management metaphor? 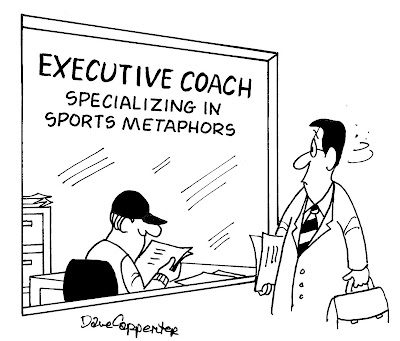 Did you know that the word ‘metaphor’ is itself a metaphor? I just learnt that the word is a metaphor for carrying something beyond – it combines meta (beyond) and phoro (to carry).

The function of metaphors (together with similes and analogies) seems to be to assist conscious comprehension of the real world, and communication about it. It is possible to believe, as I do, that we need metaphors to consciously comprehend and communicate what we experience, while still maintaining that we have direct experience of the real world. In our attempt to understand this process of conscious comprehension and communication it is common to use the metaphor of a mind that creates maps or models of reality. However, if we are wise, we keep reminding ourselves that the map is not the territory, and the model is not reality.

I am focusing here on management metaphors because a few weeks ago I was struck by the thought that the potential for competition between use of sporting and musical metaphors in a workplace could be a source of humour. At the time I was trying to think of a topic for a humorous speech to present at Toastmasters. The speech turned out to be somewhat entertaining rather than uproariously funny, but the process of preparing it led me to think more deeply about management metaphors.

The speech began with Sam Musico, who had just been recruited to the firm, being taken to meet the Boss in his office. As was his custom, the Boss asked him what sport he followed. Sam replied that he didn’t follow any sport, he was interested in music. The Boss then leaned on his bookcase, and looked Sam up and down, before saying:

“That’s OK, Sam. Just keep your eye on the ball. I hope to see you kick lots of goals!”

Asked later if he knew what the Boss was talking about, Sam said:

“I think he means to say that he wants me to stay in tune. And he hopes to see me become a virtuoso!”

Anyhow, to cut the story short, Sam did very well when working in our firm. After a few years, he left us and went off to play in the big league, and became a highly successful manager. One day, when we were discussing who to invite to speak to our annual management seminar, the Boss said: “Sam had become a management maestro. We should invite him.”

So, we asked Sam to talk on the topic: How to become a management maestro.

Sam began his speech by quoting a famous management guru who once wrote:

A successful manager of a business is like “the conductor of a symphony orchestra, through whose effort, vision and leadership, individual instrumental parts that are so much noise by themselves, become the living whole of music.”

Then Sam told us he had a different view. He read us a poem he had written:

“An orchestra doesn’t need a maestro,

The gestures he makes are just for show.

The players focus on the composer’s score,

But your audience wants you to do much more.

Like a jazz band, the success of your enterprise,

Depends on players learning to improvise.

So, the metaphor I’m here to broach,

Is the ethos of a football coach”.

After the seminar was over, the Boss said: “You know, I think Sam might have learnt a thing or two about management while he worked here!”.

The purpose of my speech was to entertain rather than to argue that the sports coach metaphor is the best management metaphor under all circumstances.

The management guru, whose words are quoted above, was Peter Drucker (The Practice of Management, 1954). I left his name out of the speech because the quote was selective. Drucker went on to say: “But the conductor has the composer’s score: he is only interpreter. The manager is both composer and conductor”.

The orchestra metaphor might be appropriate in some contexts. In proposing his orchestra metaphor, Drucker might have had manufacturing industry in mind. It could be argued that, from a management perspective, a manufacturing firm has more in common with a symphony orchestra than with a jazz band, or football team. This video of dancing robots assembling cars may help make the point.

The actual role of the maestro is another issue lurking in the background. The maestro’s responsibilities extend beyond waving his arms around during an orchestral performance. Henry Mintzberg explains that in his blog post, The maestro myth of managing, which provided some inspiration for Sam’s poem. In some respects, the maestro’s role is similar to that of a football coach.

My bottom line (if I may add a business metaphor to the mix) is that the sports coach metaphor is relevant to many aspects of management. However, to claim that the sports coach metaphor is always better than other management metaphors would be like claiming that a map of Australia is always better than other maps. Just as the best map to use depend on the territory that you are considering, the best management metaphor to use depends on the context that you are considering.