Are you also a decentralist? 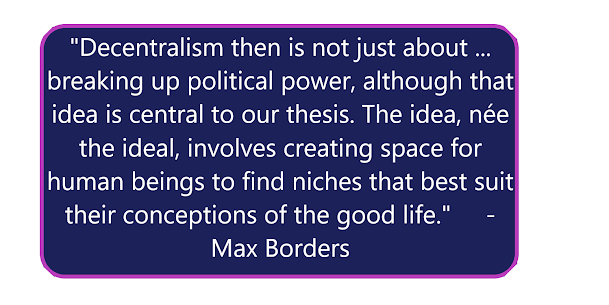 Max Borders shares his personal philosophy of life in his book, The Decentralist: Mission, morality and meaning in the age of crypto. His aim in doing that it to persuade readers to become decentralists.

I decided that I was already a decentralist before I had finished reading the introduction. The fundamental point is that decentralism is required because individuals need to pursue happiness in different ways. The mission of decentralists is to create conditions for radical pluralism – a garden of forking paths. Sometimes we flourish by walking together; at other times we need to take different paths in order to flourish. The garden of forking paths creates opportunities for people to blaze different trails.

There is no easily accessible summary of the main principles of decentralism espoused in the book, so I have attempted to write one:

I agree with those principles. Max Borders persuaded me a few years ago to look forward to the social singularity. Hopefully the ethical principles he advocates for the age of crypto will help that vision to be achieved.

Some ideas in The Decentralist seem to me to be wacky but they are not central to the ethos of decentralism. I strongly disagree with the suggestion that we should dispense with “the idea of truth as something to be discovered in the world instead of experienced by the subject” (p 123). An untrue story is not made true by being widely accepted and told frequently. We cannot prevent reality from biting our bums merely by embracing delusions about it.

The book is easy to read. The digital gimmicky of the presentation style will no doubt appeal to many readers. Each chapter elaborates a number of concepts corresponding to the chapter number. So, in Chapter 1, we have “one revolution”, in Chapter 2, “two hands”, in Chapter 3, “three governors”, and so forth. Those who would prefer to read a book covering a similar range of issues, and advancing similar views using a more conventional style of scholarly discussion, are welcome to read my book, Freedom, Progress, and Human Flourishing.

From my perspective, the most interesting chapter of The Decentralist is Chapter 3, which considers implications for communication of classifying people as thinkers, relaters, and movers, depending on whether their minds are governed primarily by their heads, their hearts, or gut instincts. I had previously been introduced to the idea that humans have brains in hearts and guts as well as heads, and should seek alignment between them. When we speak metaphorically of following our hearts, keeping cool heads, and being gutsy, we are expressing ideas that are deeply entrenched in human culture (and even anatomy, perhaps). I was also aware of marketing techniques appealing to emotion and instinct. However, I had not previously given explicit consideration to the potential for normal persuasive communications to benefit from attention to emotional and instinctive needs of readers, as well as to their need to be given reasons to change their minds.

This book, itself, combines appeals to emotion, reason, and instinct in persuasive communication. For example, the introduction appeals to emotion in its discussion of an individual’s desire to be happy, it appeals to reason in its discussion of broader aspects of human flourishing, and it appeals to instinct in recognizing the importance of action in pursuit of the differing goals of individuals. The metaphor of a garden of forking paths seems to me to be a wonderful way to combine those concepts.

The Decentralist strongly supports the view that individuals have greatest opportunities to flourish under conditions where they are free to choose for themselves which path to take. The personal philosophy that Max Borders espouses in this book will hopefully persuade many more people to adopt the ethics of decentralism.