How does liberty promote peacefulness? 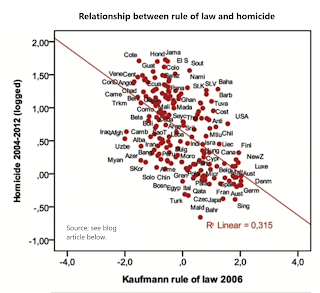 People who understand that self-direction is essential to their own flourishing have no difficulty grasping how liberty has potential to promote peacefulness. Such people usually advocate the non-aggression principle, which requires them to refrain from initiating or threatening any forceful interference with other individuals or their property. They are likely to see that principle as an application of the Golden Rule of treating others as you wish to be treated, the Kantian imperative, the ancient virtues of justice, temperance and loving-kindness, a matter of honor and integrity, the ethics of respect, norms of reciprocity, or some combination of the above.

The proviso is important. One “other thing” that also has an important influence on the peacefulness of outcomes is the way perceived aggressions are dealt with. In particular, outcomes in countries where do-it-yourself (DIY) justice is the norm are likely to be less peaceful than those in countries governed by rule of law. The problem with DIY justice is that it is often perceived to be biased, and hence results in family feuds and further retribution.

John Locke recognised DIY justice as a flaw in his vision of humans being “perfectly free …  subject only to limits set by the law of nature”. He noted that it would be seen to be “unreasonable for men to be judges in their own cases” because:
“self love will make men partial to themselves and their friends; and on the other side, that ill-nature, passion, and revenge will carry them too far in punishing others; and hence nothing but confusion and disorder will follow: and that therefore God hath certainly appointed government to restrain the partiality and violence of men” (Second Treatise of Government, Chapter 2).

In writing that, John Locke was possibly mindful of the historical experience of DIY justice in England and Europe.

Historical explanations of the growth of peacefulness

In attempting to explain the long-term decline in homicide rates in Europe, shown in the accompanying graph, Steven Pinker follows the reasoning of Norbert Elias who suggested that the advent of centralised monarchies, replacing a patchwork of baronies and fiefs, played an important role in encouraging people to display greater self-control (a modern word with a similar meaning to the ancient virtue of temperance). In England, King Henry I, who reigned in the early 12th century, redefined homicide as an offence against the state rather than as a tort. That changed the rules of the game. As Pinker puts it:
“A man’s ticket to fortune was no longer being the baddest knight in the area but making a pilgrimage to the king’s court and currying favour with him and his entourage” (The Better Angels of Our Nature, 2011, p 75).

The advent of centralised monarchies also improved incentives for mutually beneficial trade by penalising plunder. When people are engaged in mutually beneficial trading, they have an added incentive to refrain from murdering their trading partners. Given appropriate incentives, the ancient virtue of prudence helped people to exercise the Christian virtue of loving their neighbours rather than murdering them.

In case anyone is wondering, the thought in the preceding sentence wasn’t borrowed from Steven Pinker. Pinker doesn’t claim that the Christian virtues played a positive role in the civilisation process. He suggests, with some justification, that in the middle ages Christianity was more concerned with saving souls than with the sacredness of life. Nevertheless, at a couple of points in The Better Angels of Our Nature, Pinker acknowledges the importance of the various versions Golden Rule that have been discovered by the world’s major religions.

If you are sceptical about the ability of an autocratic monarchy, a Leviathan, to play a positive role in defending rights and promoting peace, it may help to think of the advantages of stationary bandits replacing roving bandits, as suggested by Mancur Olson. Even if the motives of a stationary bandit are entirely selfish it can still be in his interests to enter into a mutually beneficial partnership with his subjects. In exchange for taxes he may use his power to give them the incentive to attempt to accumulate wealth, for example by recognising property rights and enforcing contracts. There is further explanation here.

In historical terms, monarchies that were prepared to use their coercive powers to defend the rights of citizens were a step in the direction of rule of law – a set of institutions protecting individual rights and ensuring that no-one is above the law.

Steven Pinker notes that a humanitarian revolution occurred in the 17th and 18th centuries resulting in a reduction in barbarity of punishments, a greater willingness to allow heretics to go to hell rather than to persecute them to save their souls, and a reduction in the power of kings. Pinker attributes this revolution to enlightenment humanism. I have previously argued that Pinker is broadly correct to present this as a coherent world view in terms of its impact on public opinion, despite the disparate views of leading thinkers.

Other factors which Pinker sees as contributing to the peacefulness of societies include: growth in the power of women; an expansion in the circle of sympathy to encompass people in other communities and other countries; and ‘the escalator of reason’, which involves detaching oneself from a parochial viewpoint. I have discussed those processes previously, so I will not dwell on them here. It is worth noting, however, that the circle of sympathy and escalator of reason also promote freedom via greater recognition of human rights and enabling widespread adoption of emancipative values.

So, has the greater liberty of the western democracies made them uniquely peaceful?

The answer isn’t obvious. Homicide statistics suggest that some countries with autocratic governments are also relatively peaceful. It seems likely, however, that may reflect suppression of violence rather than genuine peacefulness. That view is supported by the explosion of violence that occurred in eastern Europe following the collapse of communism in eastern Europe.

Research by Tapio Lappi-Seppälä and Martti Lehti, using an extensive international data base, suggests that the level of lethal violence is heavily dependent on the rule of law, the extent of corruption, the level of democracy, and social and economic equality. High crime societies are characterised by stronger authoritarian and conservative moral views, more collectivist cultures, and short-term cultural orientations (‘Cross-Comparative Perspectives on Global Homicide Trends’,  Crime and Justice 43(1): 2014).

The relationship between rule of law and homicide rate, as depicted in the graph at the beginning of this post (borrowed from the article by Tapio Lappi-Seppälä and Martti Lehti) is particularly pertinent to the question of how liberty promotes peacefulness. The rule of law index used (the World Bank’s index constructed by Daniel Kauffman, Aart Kraay and Massimo Mastruzzi) captures “perceptions of the extent to which agents have confidence in and abide by the rules of society, and in particular the quality of contract enforcement, property rights, the police and the courts, as well as the likelihood of crime and violence”. I have previously noted that the index covers similar ground to the legal component of an economic freedom index.

Liberty promotes peacefulness because it requires people to refrain from initiating or threatening any forceful interference with other individuals or their property. The rule of law that protects liberty also promotes peacefulness by enabling societies to avoid the violence associated with do-it-yourself justice.

Do you think that the erosion of the rule of law in more recent times (some examples of what I mean are listed below) could lead to an increase in violence?

# that proportion of those who voted for Brexit feeling “betrayed” by the apparent obstruction and inertia demonstrated by the establishment. (“Why should I follow the law when they don’t do what I voted for?”);
# various versions of “the deplorables” and gilets jaunes, and antifa - which has seen violence accompanying rallies; and
# green activists seemingly feed up with what they see as lack of action on things like climate change (also fed with a liberal dose of anti-capitalism) and a consequent disrespect for the rule of law and of property rights.

Is the period around 2019 another in the line of 1848s and 1968s and where will that take us given that so much of what I have described above is so illiberal and intolerant?

As I was thinking about your examples, I saw an advert for Q&A on the ABC tonight, which seems to be raising similar issues. I guess Q&A will shed more heat than light as usual. It will probably be less stressful for me to spend my time preparing my tax return than watching the program.

Perhaps we are heading for something more like 1968 than 1848. There is certainly polarisation and some potential for violence. However, I don’t think we are likely to see repression to the same extent as that which followed 1848. These days in the examples you give, the governments concerned want to be seen to have legitimacy in the eyes of a large slice of the electorate. Similarly, I think the vast majority of protesters still want to influence the middle ground of public opinion (but I could be wrong about that).

When I look at my own attitudes, there are some laws I abide by for pragmatic (prudential) reasons, rather than because I think they have legitimacy in terms of any constitution that I could sign up to as a social contract. The system of government we have at present nevertheless has the legitimacy of providing a relatively peaceful means to remove bad governments. That is fairly close to Churchill’s view of democracy as the “least worst system”. That might still be a fairly common view.

I am reminded now of something Sheldon Richman wrote where he asked In relation to the U.S.:
“Where is the Constitution?” Richman was referring to “the set of dispositions that influence what most Americans will accept as legitimate actions by the politicians and bureaucrats who make up the government”.
I wrote about Richman’s book here:
https://www.freedomandflourishing.com/2016/11/did-framers-of-us-constitution-intend.html

I did actually watch Q and A. It was much better than I had expected.