How can you believe in the existence of natural rights? 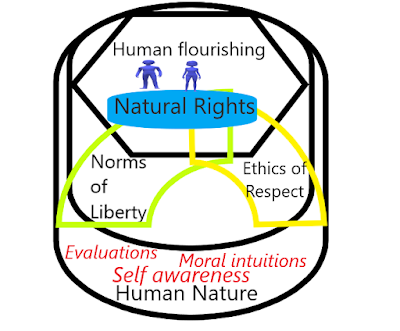 In preceding articles on this blog I have traced the evolution of the concept of natural rights from ancient reasoning about natural law to the U.S. Declaration of Independence in 1776. The importance of the Declaration’s assertion of natural rights stems from the moral support its inspiring message has provided, and still provides, to people whose rights have been infringed or insufficiently recognised in the U.S. and elsewhere in the world.

Not long after the U.S. declared independence, some influential philosophers began to cast doubt on the concept of natural rights. The famous British statesman and political philosopher, Edmund Burke, argued that “the primitive rights of man undergo such a variety of refractions and reflections, that it becomes absurd to talk of them as if they continued in the simplicity of their original direction” (Reflections on the Revolution in France, 1790).

Jeremy Bentham, the founder of utilitarianism, argued that only political rights – rights established and enforced by governments have “any determinate and intelligible meaning”. He viewed natural rights as “rhetorical nonsense, nonsense upon stilts” (Anarchical Fallacies, 1796).

Much modern questioning of the existence of natural rights stems from doubts about the existence of a Creator who could endow them in the manner suggested by the authors of the U.S. Declaration of Independence. Michael Birshan has suggested that although it is plausible that there is a system of natural rights instituted by a Supreme Being, “it is much less plausible that man could ever discover them through rational reasoning”.

Does it make sense to view natural rights as stemming from our human nature, without necessarily involving the intervention of a Supreme Being? I believe it does. I advance two overlapping lines of argument below to support the view that natural rights are inherent in the nature of humans.

The first line of argument stems from Aristotle’s observations about the natural potential for individual humans to flourish. As explained recently on this blog, an understanding of the nature of human flourishing implies that individuals have liberty to exercise responsibility for self-direction. In one of the first posts published on this blog I drew attention to the observation of Douglas Rasmussen and Douglas Den Uyl about the role of liberty in protecting “the possibility of agency or self-direction, which is central to any and every form of human flourishing”.

However, that line of argument doesn’t fully explain why you and I have strong moral intuitions that we, and Mr Xi, should recognise that other individual humans have the right to exercise the self-direction that is central to their flourishing.

My second line of argument is that a capacity for moral intuitions is inherent in human nature and has evolved over time into the ethics of respect – the foundation of natural rights - as a consequence of natural processes of cooperation for mutual benefit.

In ancient times, the existence of such intuitions was recognised by Cicero, who argued that “respect for virtue” is a ubiquitous aspect of human nature and that “nature made us just that we might participate our goods with each other, and supply each other’s wants”.

In the 18th century, Francis Hutcheson also recognised such intuitions in discussing the “the right to natural liberty”:  “Every man has a sense of this right, and a sense of the evil of cruelty in interrupting this joyful liberty of others, without necessity for some more general good”.

More recently, intuitions about ethical treatment of others have been studied by Jonathan Haidt, a social psychologist, in The Righteous Mind: Why good people are divided by politics and religion, 2012.  The basic idea of his moral foundations theory is that our moral intuitions are related to adaptive challenges of social life that have been identified by evolutionary psychologists. Moral foundations are innate, but they are expressed in differing ways and to differing extents in different cultures. I have high regard for Haidt’s moral foundations theory but, as noted previously, in my view his survey methods exaggerate the extent that people who give high priority to liberty are undisturbed by feelings of empathy and disgust.

The best philosophical discussion I am aware of about the evolution of the ethics of respect is that by Robert Nozick in Invariances, 2001. Nozick began his earlier, and more famous, book, Anarchy, State and Utopia, by assuming a state of nature in which individuals are in a “state of perfect freedom”. He noted that he was “following the respectable tradition of Locke, who does not provide anything remotely resembling a satisfactory explanation of the status and basis of the law of nature in his Second Treatise”. Chapter 5 of Invariances does seem to me to provide a satisfactory explanation of how moral intuitions might have evolved naturally to support the ethics of respect.

Nozick’s argument can be briefly summarised as follows:


Nozick sums up:
“if conscious self-awareness was selected for because it makes us capable of ethical behaviour, then ethics, even the very first layer of the ethics of respect, truly is what makes us human. A satisfying conclusion. And one with some normative force” (p 300).

Since the ethics of respect entails recognition of Lockean rights, Nozick’s naturalistic explanation implicitly recognises that such rights are natural.

Conclusion
It makes sense to believe that natural rights are inherent in the nature of humans. Individual humans have a natural right to exercise the self-direction that is central to their flourishing. Natural rights have normative significance as an outcome of a long evolutionary process involving development of moral intuitions, social norms and evaluative capabilities. That process explains why you and I have moral intuitions that we, and Mr Xi, should abide by the norms of liberty that maximize the opportunities available for all to flourish.