Does your flourishing depend on having a meaningful life and being true to your self? 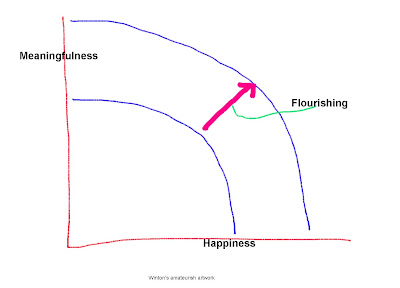 The idea that people gain happiness by acting in accordance with their perceived identity has interested me since I read (and wrote about) Identity Economics, by George Akerlof and Rachel Kranton quite a few years ago. The idea was used in their book to consider the incentives that people have to conform to the norms and ideals of the social categories to which they belong (e.g. gender, race, social class, age group) but I wonder whether the idea of being true to one’s self might shed light on the relationship between happiness and deeper concepts of identity related to personality, signature strengths and values.

A search of the relevant literature in psychology has not uncovered any direct tests of this idea, but I have found a couple of articles that seem to point in the direction of a hypothesis that might be worth testing.

My starting point is that the extent to which people assess their lives as being meaningful seems to be closely related to their perceptions of their identity. We know from research by Roy Baumeister (with Kathleen Vohs, Jennifer Aaker and Emily Garbinsky) that the extent to which people view their lives as meaningful is closely related to doing things that express themselves (for a summary discussion see Baumeister’s essay entitled The Meanings of Life).

The research by Baumeister et al was focussed on the differences between happiness and meaningfulness of life as assessed by the individuals in their survey. The two states overlapped substantially: almost half of the variation in meaningfulness was explained by happiness, and vice versa. The researchers used statistical techniques to abstract from this interdependence and to look for factors that had different impacts on happiness and meaning.

The research suggested that the extent to which people identify as being wise or creative was associated with them viewing their lives as meaningful, but did not make them happier. Other factors adding to meaningfulness but not happiness included working, exercising, meditating and praying. Stress, negative events, worrying, arguing, and reflecting on challenges and struggles all seem to be part and parcel of a highly meaningful life.

Factors that added to happiness that had little impact on meaningfulness of life included satisfaction of desires, having enough money to buy the things one wants, good health, and the frequency of good and bad feelings. There is a trade-off between happiness and meaningfulness of life because people have to choose at the margin whether to allocate more time and other resources to the things that make them happier or to things that make life more meaningful.

Unfortunately, the research I have been discussing did not consider to what extent people perceive themselves as actually acting in accordance with the values that add meaning to their lives. It might be possible for some individuals to feel that their lives are highly meaningful but to be unhappy because they lack the self-control to live up to the high standards that they set themselves. Alternatively, greater self-control may make it possible for people to attain more meaningful lives through a smaller sacrifice of happiness.

There is some research which shows that inadequate self-control has a deleterious effect on happiness. Psychologists define self-control as the ability to override or change one’s inner responses as well as to interrupt undesired impulses and to refrain from acting on them. An article entitled “Yes, But Are They Happy? Effects of Trait Self-Control on Affective Well-Being and Life Satisfaction” by Wilhelm Hofmann, Maike Luhmann, Rachel Fisher, Kathleen Vohs and Roy Baumeister concluded: “our data clearly indicate that people who have more trait self-control feel happier and are gladder about their life”.  The authors found that “many benefits of high self-control are linked to handling and avoiding conflicts among goals”.

The important point is that there may be potential for many people to flourish to a greater extent by improving their self-control. Roy Baumeister and Ron Tierney wrote a book about how to do that, which was discussed on this blog a few years ago.

Postscript:
After writing this piece I had some doubts about whether it makes sense to suggest that people with self-control problems would claim that their lives are meaningful. Then it occurred to me that just about everyone I know is a reforming sinner – a fallible human trying to live a better life. I don’t know many saints!
Introspection can’t take me far, but it does tell me that sinners who try to reform themselves often do so because they feel their lives are meaningful and should not be wasted. Introspection also tells me that reforming sinners cannot live with no regrets unless they are willing to expose themselves to temptation, and that when people are tempted they find themselves outside their comfort zones - they tend to succumb to temptation from time to time and feel somewhat unhappy.
For example, while I was giving up smoking I would have certainly said that my life was highly meaningful. However, in order to live a normal life I had to expose myself to situations where I was tempted to have a cigarette. So, I spent a fair amount of time suffering from withdrawal symptoms and would probably have rated my happiness somewhat lower than when I was smoking full-time.


That story has a happy ending. For many years I have been able to observe other people smoking without craving for a cigarette. I would now give myself a higher rating for self-control, but I’m still a fallible human trying to live a better life!
Posted by Winton Bates at 6:28 AM