Can creative destruction be an inclusive process? 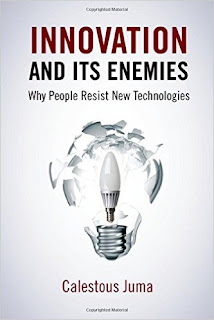 This question is prompted by my reading of Innovation and Its Enemies, Why people resist new technologies, a recently published book by Calestous Juma. The author takes much of his inspiration from Joseph Schumpeter, who famously described the innovation process as one of creative destruction. Juma argues that new controversial technologies are likely to enjoy more local support “where the business models include provisions for inclusive innovation”. I will explain later.

As the title suggests, the book explores resistance to introduction of new technologies. It does this mainly by telling the stories of nine innovations: coffee, printing of the Koran, margarine, farm mechanization, AC electricity, mechanical refrigeration, recorded sound, transgenic crops, and AquaAdvantage salmon.

Anyone who has an interest in innovation is likely to enjoy reading the stories presented in this book. Without reading a book like this one it would be difficult to fully appreciate that goods, like coffee, that are now commonplace, were once highly controversial innovations. The stories told in the book make me wonder whether future generations will look back with bemusement about my concerns about artificial intelligence and neural lace.

Although Calestous Juma delves into history in these case studies, he does not seek to provide much historical perspective on changing societal attitudes toward innovation. I doubt whether he believes that we are living in a time when opposition to innovation is particularly great by historical standards, but his views on such matters are not obvious from this book. Readers need to look elsewhere (e.g. The Enlightened Economy, by Joel Mokyr) for an understanding of the industrial enlightenment that began to occur in western Europe around 300 years ago. The author’s neglect of this big picture of attitudinal change is surprising in view of his acknowledgement that he obtained “early inspiration” from an article by Joel Mokyr on innovation and its enemies.
The stories told in Juma’s book are enlightening about the nature of resistance to new technologies. The general message is that resistance should not be lightly dismissed as irrational fear of change:
“Many of these debates over new technology are framed in the context of risks to moral values, human health, and environmental safety. But behind these genuine concerns often lie deeper, but unacknowledged, socioeconomic considerations. This book demonstrates the extent to which those factors shape and influence technological controversies, with specific emphasis on the role of social institutions”.

One of the things the book demonstrates is that resistance to innovation is often fuelled by people who have reason to fear competition from new products and new ways of doing things. Those faced with potential for economic loss have used every trick available in an attempt to protect themselves from the consequences of innovation. It is certainly true that many members of the public have genuine concerns about the potential impact of innovations on public morals, health and the environment, but the losers from change often exploit such concerns mercilessly to persuade governments to protect their interests. Thankfully, since the industrial enlightenment, the efforts of the losers to protect themselves from new competition have not been particularly successful.

Although he has chosen a similar title for his book, the author is clearly not a fan of Virginia Postrel’s The Future and its Enemies (which I discussed here).  He has little faith in the capacity of the spontaneous processes of free markets to manage innovation:
“Managing the interactions between change and continuity remains one of the most critical functions of government”.
Again:
“Political leadership on innovation and the existence of requisite institutions of science and technology advice are an essential aspect of economic governance. Such institutions need to embody democratic practices such as transparency and citizen participation that accommodate diverse sources of expertise”.

The author’s apparent faith in government regulation of the innovation process sits oddly with his acknowledgement of shortcomings in existing regulatory processes which focus largely on the risks of introducing new products. He acknowledges that these processes often fail “to compare the risks and benefits associated with the new product to those of existing production systems, even though it is precisely this difference that should form the basis of a regulatory decision on new technologies”. The author also acknowledges the potential for consumer protection regulation to be used for protectionist purposes:
“What may appear as a legitimate appeal for the right to know may in fact be driven by an effort to brand a product so it can be rejected by consumers for protectionist reasons”.

I agree with the author that sensible political leadership is a fundamental requirement, but sensible political leaders will aim to confine regulatory interventions to those circumstances where there are good reasons to fear that spontaneous processes might lead to outcomes that will be widely regretted. When political leaders set out to manage interactions between change and continuity they open their doors even further to interest groups seeking preferential treatment. It would be nice to think that sensible policies and social harmony will emerge from citizen participation that accommodates diverse sources of expertise, but experience suggests that elected politicians are more representative of broader community interests than are the interest group spokespersons that governments select as citizen representatives. The most likely outcome is for the interests that would be represented in such forums (e.g. consumer, environmental, industry and union groups) to conspire to protect their interests in regulating markets, at the expense of the interests of the broader community in allowing free competition to determine outcomes under most circumstances. The critical requirement for sensible policy development is for the claims of interest groups to be subjected to critical scrutiny within the context of a public inquiry process that is capable of providing trustworthy independent advice to governments. (Australia’s Productivity Commission may provide a useful model for other countries to consider.)

Calestous Juma suggests several ways in which innovation could be made a more inclusive process: greater involvement of public sector institutions in providing training in the emerging fields; creation of joint ventures; equitable management of intellectual property rights; segmentation of markets to enable the technology to be used for non-competitive products, and improvement of the policy environment to support long-term technology partnerships.

Smoke and mirrors may help political magicians to appear to be ‘inclusive’, but they cannot alter the fact that some people are adversely affected by innovations that provide widespread benefits to the broader community. In her book, Bourgeois Equality, discussed on this blog a couple of months ago, Deirdre McCloskey uses the term, ‘bourgeois deal’ to refer to societal acceptance of innovations that compete with and displace old ways of doing things in exchange for widespread improvements in living standards. I doubt whether ‘inclusive’ innovation policies - even if designed by intelligent and well-meaning people - can do much to help sustain public support for the bourgeois deal. Ongoing support for the bourgeois deal depends on expectations that innovation will continue to generate widespread improvements in living standards.


"I appreciate your thoughtful review of my book. You raise important points that need addressing. First, you wondered why I did not address the question of whether public attitudes on new technologies have changed over the centuries. I address this issue by showing that the public responses to new technologies appear to be conserved over the 600 years that the case studies cover. At face value this may appear not to be the case because of the remarkable proliferation of technology into every aspect of human life. I think that the change has been in the availability of technologies due to the exponential growth in science, technology and engineering. Public perception of technological risks has not changed, mostly because as humans we have not changed in any discernible way over the last 600 years. We have not found a way to reprogram the amygdala, to simplify a little.

Now to your more complex question: is inclusive innovation compatible with creative destruction? My answer is yes. In many cases disruptions, to use the term in a more prosaic way, is largely a result of the business model used. There are two examples that illustrate this. The introduction of mobile phones in Africa was by any measure disruptive. But it was also inclusive because from the outset the focus was to ensure that the poor had access to the service. Inclusive innovation was achieved through low-cost handsets and pre-payments for airtime. The early concern that mobile phones would be toys for the rich never came to be. The second example involves the strategies adopted under the Montreal Protocol to develop alternatives to the ozone-depleting substances. In this case those firms such as DuPont that were likely to be disrupted by alternative chemicals were included in new research efforts. The Protocol went further and introduced an amendment that promoting the sharing of the new technologies with developing countries.

Both examples involved private-public partnerships that were committed to promoting inclusive in innovation. In both cases incumbent technologies were displaced. Both case provide lessons of inclusive innovation. We can trace other examples of inclusive innovation in history. We have café au laite, as the name advertises, because of compromise to create a recombinant product. Proposals for co-existence are not new. It was tried, without success, to leave a niche for horses in American agriculture in light of the relentless march of tractors. The proposal came too late and the superiority of tractors over horsepower illustrates that there are many areas of technological transformation where inclusive innovation is not a viable option. In other cases there has been a long period of co-existence between butter and margarine. This wasn't a result of an inclusive innovation strategy but it offers some lessons worth considering."
Posted by Winton Bates at 7:00 AM