This question is prompted by the title of Tyler Cowen’s book, Average is Over. The book has been the subject of several excellent reviews since it was published in 2013, including one by Matt Yglesias and one by Rick Searle.

My aim here is to clarify what Tyler means when he says “average is over” and then attempt to consider the implications for high income countries.

As Tyler sees it, average is over in many aspects of life in America including occupations, earnings, education and where people live. The age of genius machines is arriving. People who have skills that complement those machines have brighter prospects that those who don’t. The people with higher earnings will increasingly have relevant post secondary education. Conscientiousness and self-motivation are likely to be rewarded more highly. People who lack the necessary skills and personal qualities are likely to see an erosion of their economic futures. The labour market problems of young people who lack the right training and attitudes are likely to intensify. People with skills that are becoming redundant or over-supplied are likely to experience falls in real income.

Tyler sees America becoming two nations: a fantastically successful nation working in the technologically dynamic sector, and everyone else. Highly educated people will increasingly gravitate to areas where a relatively high proportion of other individuals have post-secondary degrees e.g. San Francisco, Raleigh (North Carolina) and Stamford (Connecticut). Low-income retirees will face increased economic pressure to move to run-down areas where rents are lower and services are deteriorating and/or to shanty towns in the warmer states.

Governments in other countries might respond differently. Nevertheless, it is clear that the underlying forces are common in many high-income countries. As Tyler puts it:
“These trends stem from some fairly basic and hard-to-reverse forces: the increasing productivity of intelligent machines, economic globalization, and the split of modern economies into both very stagnant sectors and some very dynamic sectors”.

After I finished reading the book I was left pondering how the mass of the population will benefit from having technologically dynamic growth sectors in the countries where they live. Tyler’s mention of the dreaded term ‘factor price equalization’ in the context of his discussion of the effects of international trade (outsourcing) and immigration implies that he expects real wages to fall substantially in non-dynamic sectors. Factor price equalization is, of course, a product of theoretical models which assume that all goods are internationally tradable, or that labour can and will flow between countries until wages are equalized. The market for unskilled labour is the last place where we should expect the law of one price to become a global reality.

Standard economic models lead us to expect international trade and immigration to provide net economic benefits to residents, even though they may leave a proportion of the population worse off. With that in mind, I think the emergence of technologically dynamic growth sectors based around development and use of intelligent machines should be viewed as just the latest step in a process of expansion in economic opportunities that has been occurring since the beginning of the industrial revolution. Growth sectors provide expanding opportunities for people in the regions/countries that have them, including unskilled people who benefit from the growth of demand for services and home owners who obtain capital gains. At a national level, citizens benefit from tax revenue generated, even if their careers are disrupted. For example, Tyler expects social security for the elderly in the U.S. to be maintained at around current levels - which are far higher than average earnings of unskilled workers in Mexico.

The best description I have seen of the job polarization occurring in the U.S. is provided by Figure 7 of David Autor’s paper ‘Polanyi’s paradox and the shape of employment growth’, published last year. I had thought of reproducing the graph here, but I want to encourage people to read the whole paper. The graph shows:


David Autor’s paper also contains some comparable data on job polarization in Europe. Some comparable data for Australia is shown in the chart below, which is based on data in the chapter on information technology and the Australian labour market by Jeff Borland and Michael Coelli in Australia’s Future Workforce recently published by CEDA (see Table 1, p136). CEDA’s report is worth considering at some length in a later post. 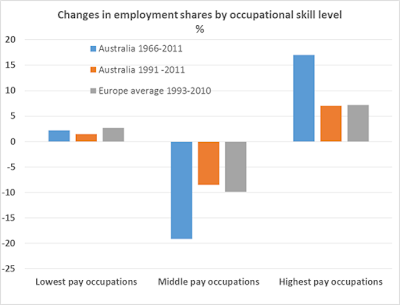 The picture of job polarization in Australia and Europe seems to differ substantially from that in America. It seems that there have been lower increases in employment in the lowest paid occupations in Australia and Europe than in the U.S. I can’t explain why. There are several possible explanations including differences in social security systems providing options other than low-paid employment in Europe and Australia, and differences in migration patterns.

David Autor argues that employment polarization is unlikely to continue indefinitely because many middle skill jobs demand a mixture of skills that cannot readily be unbundled into routine tasks that intelligent machines can do and non-routine tasks that only humans can do, or because unbundling would involve a substantial drop in quality. Workers will maintain a comparative advantage in tasks involving interpersonal interaction, flexibility, adaptability and problem solving. Examples include medical support occupations, a wide range of skilled trade and repair occupations, e.g. plumbers and electricians, marketing, and clerical occupations that involve coordination and decision-making.

I conclude with another point emphasized by David Autor. In considering the future of the labour market it is worth remembering the long history - since the beginning of the industrial revolution - of leading thinkers overestimating the potential of new technologies to substitute for human labour and underestimating their potential to complement it.
Posted by Winton Bates at 10:14 AM