Do people with strong emancipative values give lower priority to economic growth?

This question is worth considering because previous posts in this series (links here) have discussed how economic development has been associated with the strengthening of emancipative values and more widespread opportunities. This means that the ongoing generation of more widespread opportunities for individual human flourishing depends on a substantial proportion of the population maintaining a fairly positive attitude towards economic growth.

My main focus is on the extent to which the priority given to economic growth by people who hold emancipative values differs from that of the population as a whole in wealthy countries. Except where indicated, I have selected indicators from the latest WVS round which correspond to components of Welzel’s index. Countries included in the analysis are those with relatively high incomes for which data is available in the latest round of surveys i.e. 2010-14. (New Zealand is excluded from the analysis because of a high non-response rate on the question relating to priority given to economic growth.)

As a preliminary exercise, Chart 1 compares the overall average priority given to economic growth in each country with that given by members of different demographic groups. There does not seem to be any consistent pattern of difference between various groups within countries, except perhaps a tendency for young people to give lower priority to economic growth. 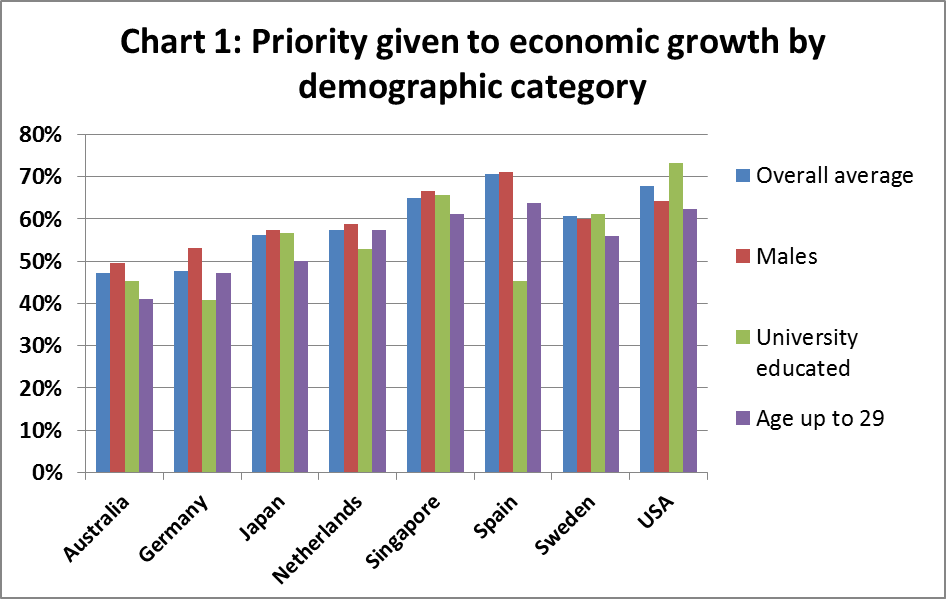 Chart 2 compares the overall average with priority given to economic growth by people with different views on desirable attributes for children to learn at home. Independence and imagination reflect positive emancipative values, whereas obedience is considered as negative. Perhaps those who see imagination as a desirable quality may be slightly less enthusiastic about economic growth, but otherwise there does not appear to be a consistent pattern. 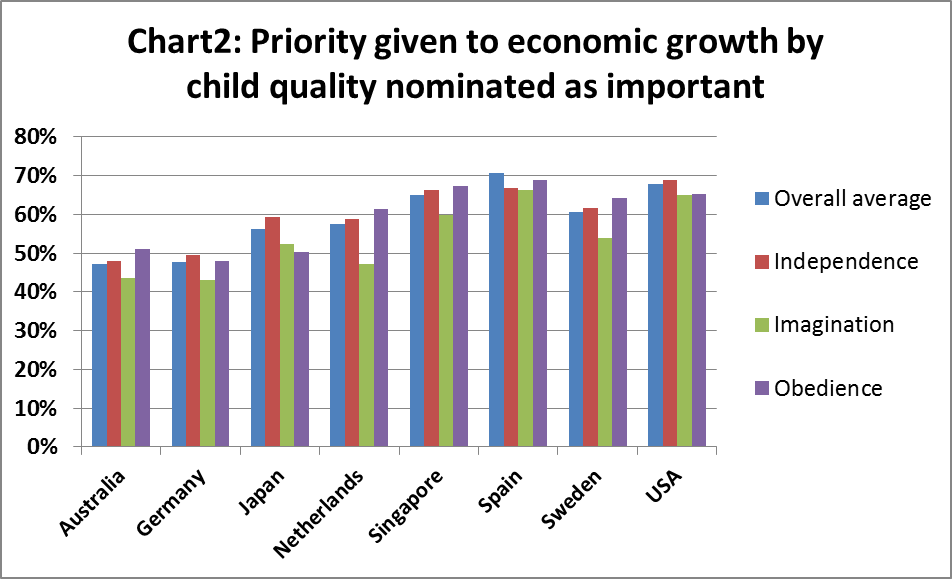 Chart 3 compares the overall average with those of groups expressing strong views on whether divorce, abortion and homosexuality are justifiable. Again, there does not seem to be any consistent pattern. 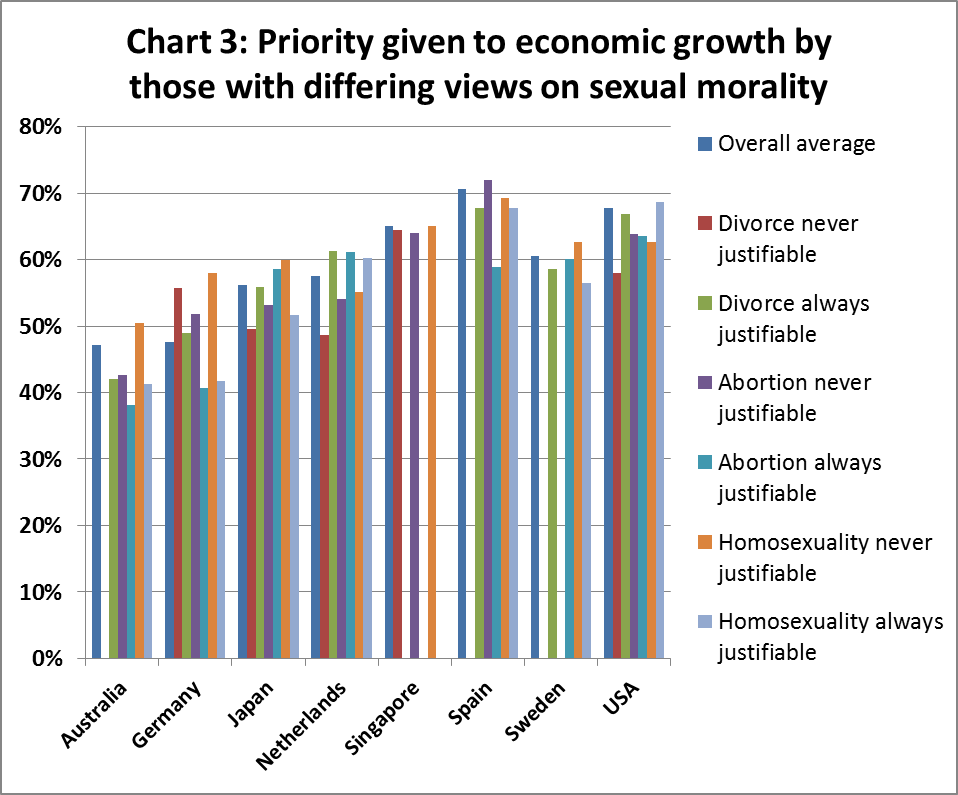 Chart 4 compares the overall average with the priority given to economic growth of people favouring gender equality. The chart shows some interesting facts e.g. people in Australia who strongly disagree that men make better political leaders than women are much less likely to view economic growth as having high priority than are other people in Australia. However, no consistent pattern of difference between the different groups in different countries is obvious. 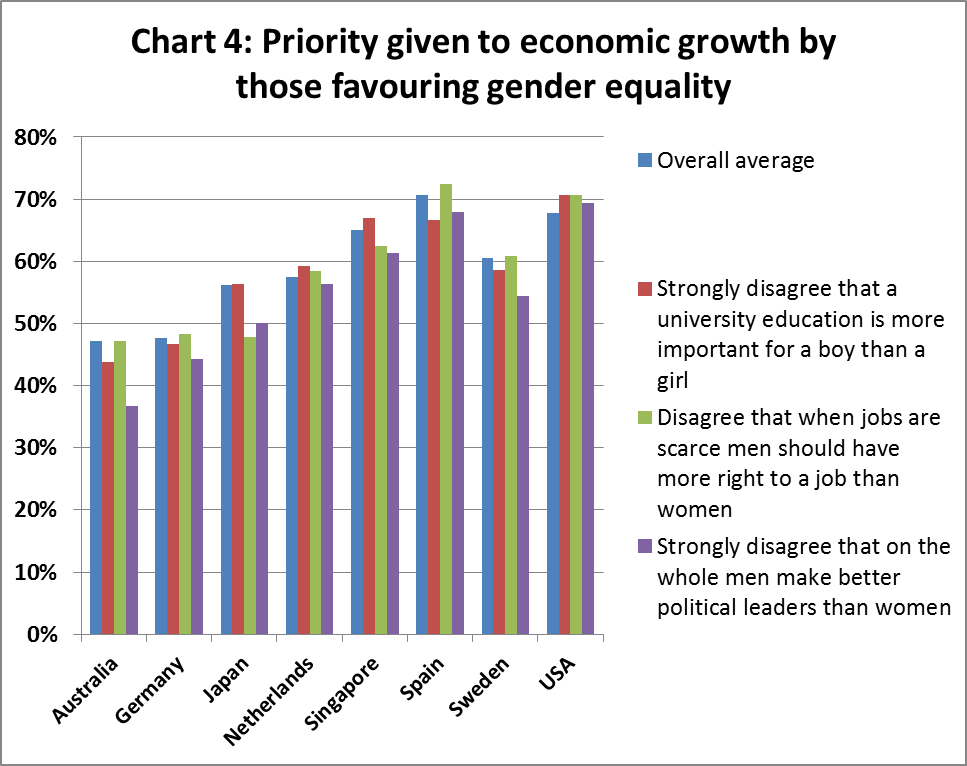 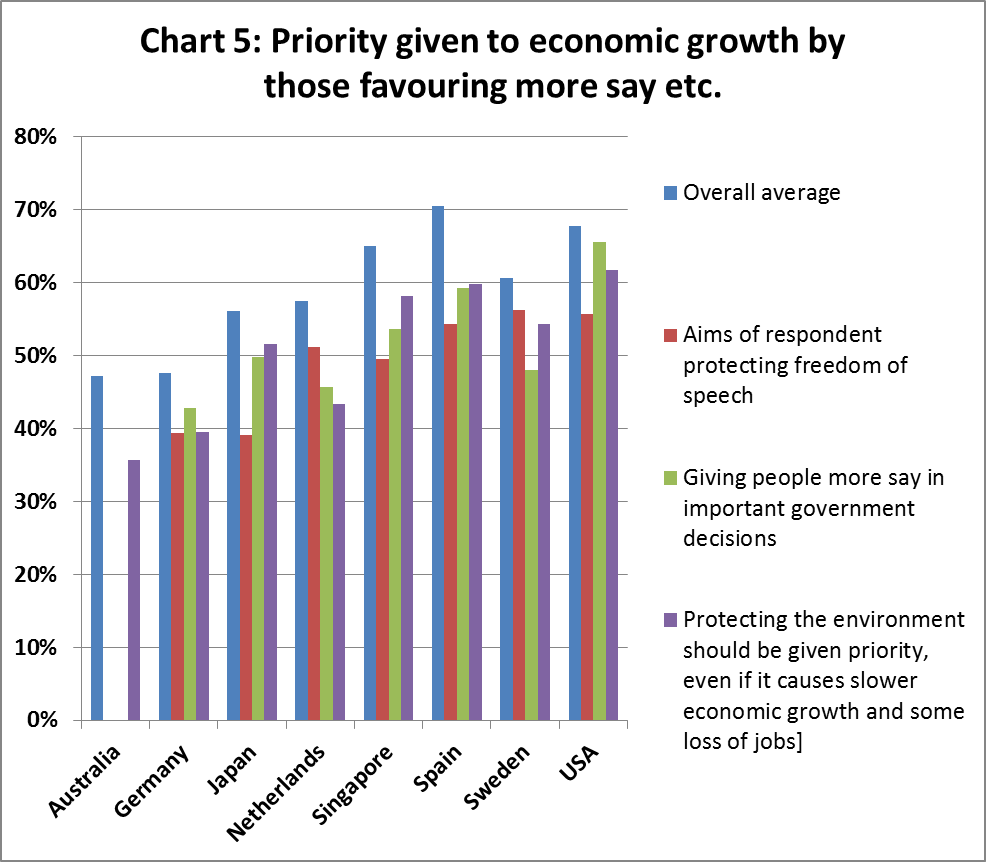 The general conclusion that I draw from this exercise is that there is not a consistent tendency for people with strong emancipative values to give lower priority to economic growth than is given by other members of the populations of wealthy countries. People who attach great importance to having “more say” seem to be less inclined than the rest of the community to see economic growth as having high priority, but that observation does not apply consistently to people who attach importance to individual autonomy, respect choices that individuals make in their personal lives and favour gender equality. As a general rule, the differences in economic growth priorities of people in different countries are more marked than the differences between different groups within countries.
Posted by Winton Bates at 8:00 AM