How have attitudes towards economic growth changed since the 1990s?

This question is of some interest in its own right, but my interest also stems from the relationships between the priority which people give to economic growth, growth outcomes and emancipative values that promote widespread opportunities. One particular issue that I want to explore is whether the growth of emancipative values must eventually come to an end because it involves, among other things, more emphasis on “people having more say in how things are done” (e.g. workplace democracy) rather than economic growth. My last post explains the context more fully.

For a couple of decades now, World Values Surveys have been asking people to choose from four options what they consider to be the most important aim for the country they live in over the next ten years.  The options are: a high level of economic growth; strong defence forces; people have more say about how things are done; and trying to make our cities and countryside more beautiful.

The focus of the following analysis is on the United States, Sweden, Australia and New Zealand. Sweden is of particular interest because it has high and rising emancipative values, the US is of interest because it is at the centre of the universe, Australia is where I live and NZ is nearby - just across the ditch. The surveys were conducted in 1995-98, 1999-04, 2005-09, 2010-14 (referred to respectively below as 1996, 2002, 2007 and 2012). I accessed the data using the World Values Studyonline data analysis facility – which is great for this kind of exercise.

The first chart shows how the priority given to economic growth has changed over time for all four surveys for which data are available and the second shows in more detail how priorities have changed since the mid 1990s. 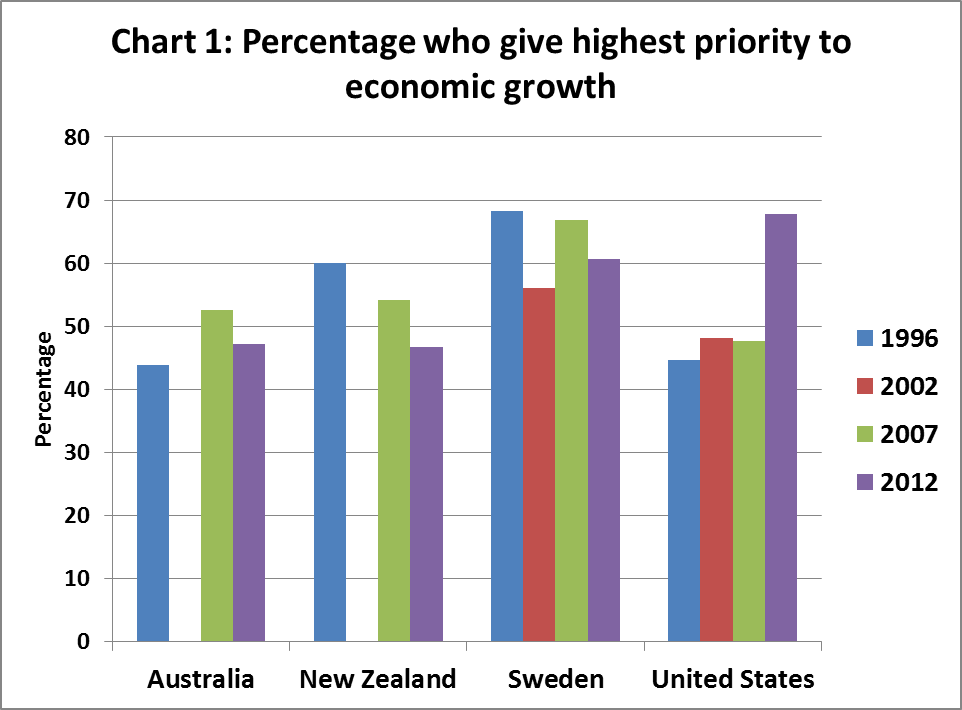 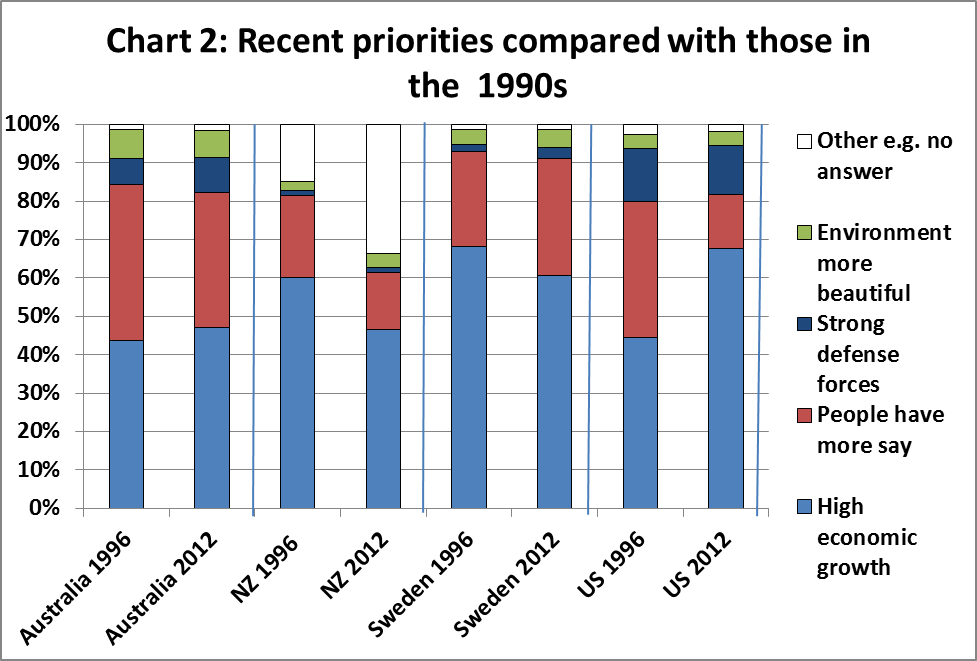 The first chart shows that people in the United States tended to give relatively low priority to economic growth at the time of the first three surveys. The second chart suggests that the increase in priority given to economic growth in the latest survey has occurred at the expense of a decline in priority given to people having more say. The change in priorities presumably reflects a tendency for people in the US to feel poorer following the GFC.

This analysis supports the general conclusion that I have been coming to from previous posts that my doubts about whether the rise of emancipative values in wealthy countries will be sustainable may not be well founded. There seems to be fairly strong grounds for optimism that voters in wealthy countries are capable of managing the tension between their non-economic social objectives (e.g. their desire to have more say) and their desire for the things that economic growth can buy.
Posted by Winton Bates at 8:00 AM

I do not know if it's just me or if everybody else experiencing issues
with your blog. It seems like some of the text on your content are running off the screen.
Can somebody else please comment and let me know if
this is happenihg to them as well? This may be a problem with
my internet browser because I've had this happen before. Appreciate
it

Feel free to surf to my web blog: Ricky Salvador