How concerned should we be about voter irrationality?

I heard Gary Gray, a minster in the Australian government, hold forth last week about the 1.5 million Australians who have a right to vote but are not on the electoral roll. He referred to this as ‘a blight on our electoral roll and the integrity of our system’. Such comments may be understandable within the context of the compulsory voting system in Australia, but does compulsory voting make sense? Would it not be more sensible to discourage people from voting if they do not see exercising their political rights as having sufficient importance to take the simple steps necessary to enrol and vote?

As I noted in a recent post it can be rational for voters to cling to irrational beliefs on political issues because the cost is low - there is a miniscule probability that the vote of any individual will be decisive in changing the result of an election. This explains the persistence of a wide disparity between views of voters and experts on many issues and why views of voters are often internally inconsistent e.g. simultaneously supporting reductions in government spending while supporting increases in many individual areas of spending.  It seems reasonable to expect that people for whom politics has no importance would be most prone to cling to such irrational positions.

How likely is it that people who have no interest in politics could have a decisive impact on election results? Figure 1, constructed from World Values Surveys in the period 2005-07, suggests that it is very likely. A considerable percentage of people in high-income democracies say that politics is not at all important in their lives. The percentages are relatively high in Italy, France and Britain, and relatively low in Sweden, Norway and Japan. 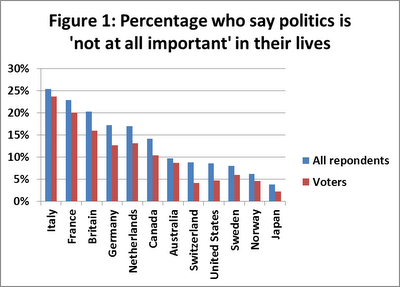 There is no reason why everyone should view politics as having some importance in their lives. You might expect, however, that people would be unlikely to vote unless forced to if politics had no importance to them. Figure 1 suggests, however, that a relatively high proportion of these people do vote in most of the countries shown.

Some people might suggest that it probably doesn’t make much difference if people vote even when politics has no importance in their lives because random votes would tend to cancel out. Unfortunately, however, there is evidence that the votes of such people are not random. Figure 2 suggests that those for whom politics is ‘not at all important’ are more likely than others to say that ‘the government should take more responsibility to ensure that everyone is provided for’. Just think about that for a moment. How can they expect governments to take on more responsibilities if people like themselves have little interest in politics, which is largely about holding governments accountable for the way they exercise their responsibilities? 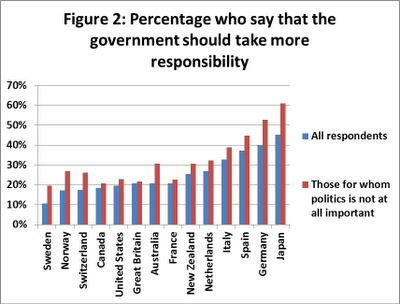 Perhaps some readers might be thinking that the people who say that politics is not at all important in their lives might actually take some interest in politics, particularly at election time. After all, some of us sometimes show some interest in sports on TV that we would claim are not at all important in our lives. The results of the World Values Surveys shown in Figure 3 suggest, however, that the extent to which voters are interested in politics is closely related to its importance to them. The Figure has been constructed from responses for the countries shown in Figure 1. (The columns add to 100% on the depth axis.) 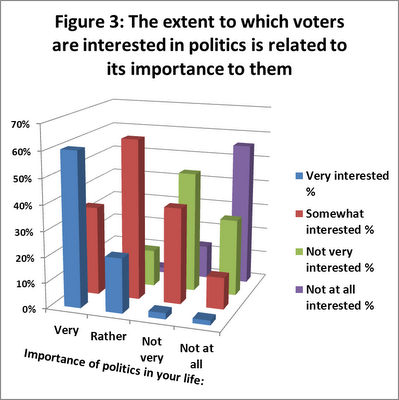 Some other characteristics of voters who say that politics is not at all important in their lives might be of interest. Their self-positioning on the left-right political spectrum is not markedly different from that of other voters. They are less likely to say that democracy is absolutely important (47% versus 60% for all voters) and more likely to say that it is good to have experts make political decisions.  They tend to be disproportionately either young (15-24) or old (65 or older); less well educated; and female (57%). They are less likely to rate the state of their health as very good (24% versus 30% for all voters) and more likely to rate it as poor or very poor (33% versus 24%). They tend to be conservative in their views on social issues (divorce, abortion, homosexuality and prostitution).They have a greater tendency to rate the fight against crime as an important goal (29% versus 19% for all voters). They are less likely than other voters to be members of religious, sport or recreation, or charitable organizations and are less likely to rate friends as very important. They are much less likely than other voters to agree that ‘most people can be trusted (29% versus 46%)
.
Should restrictions be introduced on the right to vote in an attempt to exclude people who have no interest in politics? It is not obvious how this could be done. Removal of compulsory voting requirements would make sense in Australia as a step in that direction. The experience of other countries suggests, however, that making voting voluntary would not do much to discourage people who have no interest in politics from voting.

It might be desirable to promote a cultural change away from the view that voting is a civic duty towards the view that people should refrain from voting unless they have some interest in politics. Policy outcomes would probably be worse than at present, however, if the political field was left to be fought over by people who are strongly interested in politics because of their links to narrow interest groups. A battle among interest groups could be predicted to benefit the groups that able to marshal their members effectively at the expense of broader community interests.

In order to work satisfactorily, democracies need a substantial proportion of citizens who do not have strong links to narrow interest groups to inform themselves about public policy issues, to take part in public discussion of such issues and to encourage others to do likewise. To the extent that this is happening it can probably be most readily explained in terms of public-spirited identity perceptions – i.e. individuals who see themselves as being the kind of person who does that kind of thing and gaining satisfaction from acting in that way. How could more people be encouraged to do this?
Posted by Winton Bates at 3:19 PM