How does democracy manage to survive?

In recent posts I have been discussing the rational irrationality of voters – Bryan Caplan's concept explaining how it can be rational for people to cling to irrational beliefs on political issues because there is a miniscule probability that the vote of any individual will be decisive in changing the result of an election. In my last post I provided some evidence that voter irrationality tends to expand the role of government. People who say that politics is not at all important to them are more likely than others to say that ‘the government should take more responsibility to ensure that everyone is provided for’. Many of these people exercise their right to vote even when there is no compulsion for them to do so.

It is not surprising, therefore, that democratically elected governments have a tendency to take on responsibilities that they can’t cope with. When voters demand that governments take more responsibility to ensure that everyone is provided for politicians have an incentive to respond by increasing government spending and regulatory interventions to help the needy and to protect jobs. If governments don’t raise taxes to cover increased spending, their debts grow until they are eventually unable to meet interest and repayment obligations, or to pay any other bills. If governments keep on raising taxes or imposing additional regulation to ensure that everyone is provided for they must eventually dampen incentives for productive activity to such an extent that incomes (and tax revenues) begin to fall. In either eventuality it seems reasonable to expect voter irrationality to lead to economic collapse and eventually to the collapse of democratic government.

The scenario sketched out above occurs frequently enough, but not as often as might be expected. Democracy seems to have been a fairly robust form of government in many countries, despite the rational irrationality of voters. Why is it so?

There are several possible answers to this question but the one that Joseph Schumpeter gave about 40 years ago in ‘Capitalism, Socialism and Democracy’seems to me to deserve more attention.  Schumpeter suggested that democracy doesn’t actually exist. He provided a definition of democracy consistent with the way most people would think democracy should function and then proceeded to show that democracy doesn’t exist in those terms. He then redefined democracy in a manner more consistent with the way governments that have the ‘democratic’ label attached to them actually function.

Schumpeter’s first definition of democracy was:
‘that institutional arrangement for arriving at political decisions which realizes the common good by making the people itself decide issues through the election of individuals who are to assemble in order to carry out its will’.

That definition seems to me to capture the expectations that most people would have of the way democracy is meant to work. Democracy is often defined simply as ‘government by the people’, but if the people are to govern they must have a collective ‘will’ and a mechanism for this to be carried out to realize a ‘common good’.

In showing that a democracy of that kind can’t exist Schumpeter made several points:


Schumpeter placed a lot of emphasis on the final point, explaining that it gives rise to what we now refer to as rational irrationality:
‘All this goes to show that without the initiative that comes from immediate responsibility, ignorance will persist in the face of masses of information however complete and correct. It persists even in the face of the meritorious efforts that are being made to go beyond presenting information and to teach the use of it by means of lectures, classes, discussion groups. Results are not zero. But they are small. People cannot be carried up the ladder.
Thus the citizen drops down to a lower level of mental performance as soon as he enters the political field. He argues and analyses in a way which he would readily recognize as infantile within the sphere of his real interests. He becomes a primitive again’.

According to Schumpeter, citizens are prone to ‘extra rational or irrational prejudice and impulse’ in political matters. He argued that this made them particularly vulnerable to influence by interest groups. Citizens are more vulnerable to political persuasion than to commercial advertising because they have less opportunity to test the claims that are made.

Schumpeter’s second definition of democracy was:
‘that institutional arrangement for arriving at political decisions in which individuals acquire the power to decide by means of a competitive struggle for the people’s vote’.

This captures the idea that the central feature of democracy, as actually practiced, is a competition for leadership. Schumpeter argued that democracy could only succeed in those terms if it was constrained in various ways. In particular, he argued that the ‘effective range of political decision should not be extended too far’. He seems to have had in mind parliamentary rules, such as those that ensure the government (political leadership) retains a high degree of overall budgetary control, as well as ‘constitutional’ arrangements that remove aspects of policy administration requiring particular expertise (e.g. monetary policy) from the political arena.

It is interesting that the emergence of stagflation in the 1970s led to fears that democracy might not be able to survive in the longer term unless democratic politics was constrained. (I have in mind particularly the discussion by Friedrich Hayek in 'Law, Legislation and Liberty' Vol.3, Chapter 16.) The economic reforms introduced during the 1980s and 90s reduced such concerns in some countries by giving greater independence to central banks and making governments more accountable for budget outcomes. In Australia, such reforms have taken monetary policy largely out of the political arena and made failure to maintain budget balance a much greater political liability for governments. In my view, further moves should be made in this direction to shield economic policies from political pressures that exploit voter ignorance and irrationality.  For example, better government could be achieved by adoption of a convention that advice from the Productivity Commission will be sought as a matter of course prior to legislative changes in a range of policy areas. I don’t imagine that there would be much opposition from the community at large to adoption of such a convention.

However, in most democratic countries, including Australia, there would be a fairly widespread reluctance to accept Schumpeter's advice that democracy should be constrained to such an extent that the only involvement of citizens is participation in the election of a leader. It would probably be considered laughable these days for an economics professor to try to tell voters that ‘they must understand that, once they have elected an individual, political action is his business and not theirs’.

Joseph Schumpeter probably went too far in claiming that democracy can only succeed if voters refrain from telling politicians what to do after they have been elected. He would have been on safer ground in suggesting that democracy can only succeed if citizens are willing to show some respect for political leaders who take positions that are politically unpopular. It would also be fairly safe to argue, as suggested here a few weeks ago, that political leaders who prepare the ground for reform by attempting to raise the level of public discussion of issues will often be more successful than those who show great courage in attempting to forge ahead ignoring opposition. I doubt whether Paul Keating actually had much success in explaining the J curve to the Australian public (when he was Treasurer in the 1980s) but his attempt to do so probably won him some respect. 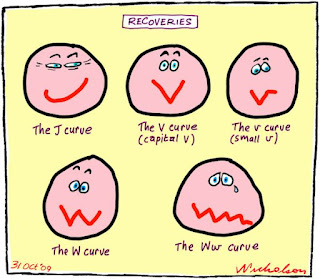 Cartoon by Nicholson from “The Australian” newspaper: www.nicholsoncartoons.com.au
Posted by Winton Bates at 9:22 AM

I don't think there are very many people who believe there's such a thing as the collective will. It seems to be something created as a strawman for critics/opponents of democracy to take pot shots at. Most people understand democracy to be about the majority. Faith in democracy is grounded in faith in a sort of pendulum swing, or the idea that no coalition of public opinion factions can stay in the majority indefinitely. If almost everyone finds themselves in the majority at least a few times in a lifetime, that's probably enough to make democracy, while flawed, better than all the alternatives.

Competition for leadership is the central feature of all politics, not just democratic politics. It's practically the definition of politics.

Hi Lorraine
Collective will is no straw man. The idea seems to have a fairly long and respectable history. There is some evidence presented in this post that Jefferson and Madison believed there was a collective will that could be discovered. I actually think there may still be a lot of merit in this view in relation to constitutional issues.

I agree that majority rule also has a long history, but it seems to come a long way down the list of characteristics in the Wikipedia definition. Wikipedia is the best source I can think of for a definition of what democracy might mean to people in democratic countries. (It might be an interesting experiment for you to try to give more prominence to majority rule.)

The idea of electing leaders doesn't seem to get much of a run in the Wikipedia definition - the main emphasis seems to be on equal access to legislative processes.