Would a good society seek to maximize a social welfare function? 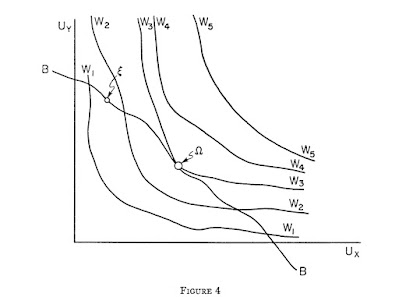 This article is about my personal experience in attempting to understand social welfare, the concept of a good society, and my role as an economist involved in the processes of social choice. I decided to write about this topic after writing an article for Savvy Street on the related topic, “Can social planning enhance individual flourishing?”

When economists talk about maximizing social welfare, they are referring to a concept that appears to have something to do with the well-being of people. However, the concept is best viewed as a signaling device to suggest that the social planner claims to have obtained insights about society from studying an abstract mathematical model. Such signaling is not helpful to consideration of the merits of policy proposals.

Maximizing social welfare can encompass policies that would enlarge the economic pie (national product) so that there is potential for everyone to be given a larger slice. In that case, it might be reasonable to argue that the policy would receive widespread support among citizens. A good society - one that is good for the people who live in it – could be expected to adopt such policies. However, claims about pursuing social welfare objectives make such policies no more attractive than if they are advocated to simply expand opportunities for individual flourishing.

Maximizing social welfare can also encompass policies to redistribute the economic pie in a manner that advocates believe will somehow enhance the collective well-being of citizens.  When maximizing social welfare is said to require redistribution of the cake, some citizens will be advantaged at the expense of others. It is possible for some policies of this nature to receive widespread support (e.g. provision of a basic social safety net) but that is less likely when extensive redistribution is proposed to equalize the utility that different individuals obtain at the margin from additional income.

Whose welfare function should we maximize?

The idea of social welfare maximization implies the existence of a social welfare function reflecting insights about determinants of collective well-being and expressing the “general will’ of the people. It was over 50 years ago that I began to realize that this idea is highly problematic. My libertarian friends might find this hard to believe, but it happened while I was studying welfare economics.

An article by Francis M Bator influenced me greatly, although perhaps not in the way the author intended. As I was reading Bator’s article - ‘The Simple Analytics of Welfare Maximization, The American Economic Review, 17(1) March 1957 - I remember feeling that this was an object of great beauty. I suppose the article seemed beautiful for the same reasons that abstract art can seem beautiful. Bator provides a geometric presentation of the derivation of a production possibilities curve, then proceeds to derivation of the utility possibility frontier, which he then crowns with a social welfare function, as shown in the diagram above.

Bator’s description of that diagram left a lasting impression on me. He tells us that BB represents the grand utility possibilities frontier, showing at each point the maximum utility for person X given any feasible level of utility for person Y, and vice versa. He then proceeds to explain the “bliss point”, Ω, in the following words:

“To designate a single best configuration we must be given a Bergson-Samuelson social welfare function that denotes the ethic that is to “count” or whose implications we wish to study. Such a function – it could be yours, or mine, or Mossadegh’s, though his is likely to be non-transitive – is intrinsically ascientific.”

What Bator meant by ascientific is that the function involves ethical valuations. However, the point that has stuck in my mind is that despite the heroic assumptions Bator was making in constructing his beautiful geometric edifice, he did not try to pretend that it could be crowned with a social welfare function aggregating the preferences of all citizens. The function depicted “could be yours, or mine, of Mossadegh’s”. (Mohammad Mosaddegh was an Iranian prime minister who held office from 1951 until 1953, when his government was overthrown - apparently in a coup orchestrated by M16 and the CIA.)

Is it possible to make sense of the diagram?

However, I reject that modern utilitarian view. It seems to me to reflect an inadequate understanding of the determinants of individual flourishing. As argued in Freedom, Progress, and Human Flourishing, even though average life satisfaction may be a reasonable indicator of the average psychological well-being of large groups of people, psychological well-being is just one of the basic goods of a flourishing human. In my experience, when people are encouraged to offer more than perfunctory responses to questions about how they are faring, they tend to talk about a combination of different things such as their aspirations and the choices they have made, their health, and their personal relationships. Satisfaction is relevant, but does not encompass all relevant aspects of human flourishing.

What are the implications for social choice?

While Bator’s description of the social welfare function let the cat out of the bag for me, I remember reading about Kenneth Arrow’s impossibility theorem at about the same time. I think the main lesson I took away was that the processes of government must inevitably be somewhat dictatorial. That makes it important to have constitutions that protect liberty and electoral processes that are capable of kicking tyrants out of office.

While studying welfare economics, I also took a course in public choice in which I had my first exposure to The Calculus of Consent, by James M Buchanan and Gordon Tulloch. That book and other writings by Buchanan have had a profound impact on my views about the good society and the role of economists.

Buchanan and Tulloch noted that when individuals are considering constitutional rules that they expect to be in place for a long time, they are uncertain as to what their own interests will be in any of the whole chain of later collective choices made according to those rules. Such uncertainty may enable people to set aside their current economic interests in making constitutional choices. One implication is that individuals will tend to choose somewhat more restrictive rules for social choice-making for areas of potential political activity that could involve violation of liberty.

Buchanan and Tulloch link liberty directly to the concept of a good society:

“The acceptance of the right of the individual to do as he desires so long as his action does not infringe on the freedom of other individuals to do likewise must be a characteristic trait in any “good” society. The precept “Love thy neighbor, but also let him alone when he desires to be let alone” may, in one sense, be said to be the overriding ethical principle for Western liberal society.” (p 217).

Buchanan later warned that the norms that underlie democratic institutions are under threat when politics is allowed to become little more than a ‘commons’ through which competing coalitions seek mutual exploitation.  (For further discussion of this please see Chapter 6 of Freedom, Progress, and HumanFlourishing).

What should economists do?

Economists who advise on public policy often view themselves as social planners who are advising benevolent despots. They are frequently disappointed to find that those whom they advise give higher priority to political and personal goals than to publicly stated economic objectives, or lack the political power to implement recommendations.

James Buchanan suggested that economists should adopt a contractarian approach, with a focus on the consequences of rules and, in particular, on the question of what rules of the game individuals might accept voluntarily as participants in an authentic constitutional convention. In providing an example of this approach, Buchanan suggested that such a convention would be unlikely to endorse rules of the game which allow majorities in a single generation to impose public debt burdens on subsequent generations of taxpayers. (Nobel prize lecture).

The focus of my career in public policy advice was partly contractarian. For most of my public service career I had the good fortune to work in agencies of the Australian government (predecessors of the Productivity Commission) which undertook research and published reports on the economic implications of changing the rules of the game for economic development. The focus of much of this work was assessing effects of barriers to international trade and other forms of industry assistance.

I note that my career was only partially contractarian because the agencies were required to make recommendations to the government according to specific terms of reference for individual inquiries and more general guidelines. The specific terms of reference were sometimes designed to ensure that governments received politically palatable recommendations, but the research and policy analysis published in inquiry reports, and in annual reports, informed policy-making processes in ways that led eventually to adoption of rules of the game more favourable to free trade.

The advisory agencies were given general guidelines including having “to have regard to the desire of the Australian Government …  to improve and promote the well-being of the people” and to “improve the efficiency with which the community’s productive resources are used”. I do not believe that the collectivism reflected in the reference to people and privately owned capital as “the community’s productive resources” had one iota of influence on the research and policy analyses conducted by the agencies.

I have endeavored to maintain a focus on the implications of different “rules of the game” in the public policy aspects of my subsequent consulting career and my writing on freedom and flourishing on this blog and in my books. There have been some lapses, but I hereby forgive myself 😄 . It has not always been easy to avoid falling into the trap of viewing oneself as a social planner advising a benevolent despot.
Posted by Winton Bates at 12:12 PM