Why did the US Declaration of Independence specify an unalienable right to the pursuit of happiness? 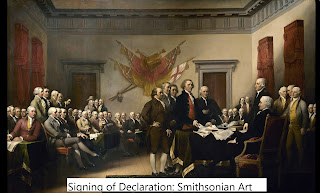 Given that the United States was founded by politicians, is there is any point trying to understand why any particular words were included in the Declaration of Independence? I think there is.
The politicians who drafted the Declaration in 1776 seem to have been more thoughtful and principled in their approach than many contemporary politicians engaged in similar constitutional issues e.g. Brexit. More importantly, even if we  think the founders were engaged in a self-interested bid for power, in preparing their Declaration they were seeking the support of American colonists, so it was in their interests to express sentiments that would attract widespread support within those communities.

Thomas Jefferson, who wrote the first draft of the Declaration, maintained later that “it was intended to be an expression of the American mind”:
“All its authority rests then on the harmonizing sentiments of the day, whether expressed in conversation, in letters, printed essays, or in the elementary books of public right, as Aristotle, Cicero, Locke, Sidney, &c.”

A copy of an extract from Jefferson's draft:

The words relating to an unalienable right to pursuit of happiness were unchanged in the various drafts of the Declaration. Rather than pondering whether those words were borrowed from one source or another, it may be more illuminating to focus on why the ideas expressed by those words would have appealed to the intended audience of American colonists and their sympathisers.

The idea of individuals being “endowed by their creator” with “unalienable rights” would have appealed to numerous followers of John Locke among American colonists. Unalienable (or inalienable) rights continue to exist even when not recognized by governments; such natural rights cannot be taken away, sold, or given away. Locke’s view that the existence of a natural right to liberty provided justification for the overthrow a tyrannical government added philosophical support to the desire of colonists free themselves from British rule.

Was “pursuit of happiness” included merely as a rhetorical device? You and I might argue that a right to liberty implies a right for individuals to pursue happiness in whatever way they choose. However, some historians have suggested that in 18th century America there could have been a tendency for liberty to be interpreted in terms of the classical republican tradition of political participation, rather than in Lockean terms of freedom from violation of natural rights (see Darrin McMahon, Happiness, a history, p 324). In that context it seems to me that recognition of a natural right to pursue happiness might have been seen to offer additional protection e.g. in discouraging governments from attempting to control religious beliefs.

Darrin McMahon’s discussion of the meaning of “pursuit of happiness” in 18th century America aids understanding of why it would have been widely viewed as a natural right at that time. He notes that John Locke wrote of natural rights to “life, liberty and estate” rather than life, liberty and happiness. Nevertheless, Locke saw pursuit of happiness as an important feature of a divinely orchestrated natural world in which individuals seek pleasant sensations and have differing tastes. Locke’s view of happiness combined hedonism with goodness, the exercise of practical wisdom, and spirituality. He suggested that the “constant pursuit of true and solid happiness” … “which is our greatest good” … frees us “from any necessary determination of our will to any particular actions”. Locke saw heaven as offering the greatest of all pleasures.

McMahon also notes the important influence of Scottish Enlightenment philosophers, particularly Francis Hutcheson, in 18th century America. As noted in the preceding article on this blog, Hutcheson argued that humans possess a moral sense. We can obtain happiness by doing good!

Carli Conklin has suggested the English jurist, William Blackstone (1723 - 1780) as the source of another influential view about pursuit of happiness in 18th century America (‘The Origins of the Pursuit of Happiness’, Washington University Jurisprudence Review, 7/2, 2015). The founders strongly disagreed with Blackstone’s belief that the British parliament remained a supreme authority over the colonies. However, they agreed with him about natural law and the pursuit of happiness, and may have seen advantage in drawing on those views to highlight an inconsistency in his position.

In his Introduction to Commentaries on the Laws of England, Blackstone argues that individual pursuit of happiness is the foundation of natural law:
“For [the Creator] has so intimately connected, so inseparably interwoven the laws of eternal justice with the happiness of each individual, that the latter cannot be attained but by observing the former; and, if the former be punctually obeyed, it can not but induce the latter. In consequence of which mutual connection of justice and human felicity, He has not perplexed the law of nature with a multitude of abstracted rules and precepts, referring merely to the fitness or unfitness of things, as some have vainly surmised; but has graciously reduced the rule of obedience to this one paternal precept, “that man should pursue his own happiness.” This is the foundation of what we call ethics, or natural law.”

The views of Benjamin Franklin about pursuit of happiness seem to draw together many threads of thinking on this topic in 18th century America. Carli Conklin quotes his views as follows:
‘Benjamin Franklin stated “[t]he desire of happiness in general is so natural to us that all the world are in pursuit of it” and although men may attempt to achieve happiness in different ways, the reality is that “[i]t is impossible ever to enjoy ourselves rightly if our conduct be not such as to preserve the harmony and order of our faculties and the original frame and constitution of our minds; all true happiness, as all that is truly beautiful, can only result from order.” Therefore, according to Franklin, if we pursue happiness through passion instead of reason, we achieve only an “inferior” and “imperfect” happiness, because “[t]here is no happiness then but in a virtuous and self-approving conduct.” Indeed, Franklin argued “the Science of Virtue is of more worth, and of more consequence to [man’s] Happiness than all the rest [of the sciences] put together.” Furthermore, Franklin stated, “I believe [God] is pleased and delights in the Happiness of those he has created; and since without Virtue Man can have no Happiness in this World, I firmly believe he delights to see me Virtuous, because he is pleas’d when he sees me Happy”.’

Conclusions
The US Declaration of Independence specified pursuit of happiness as an inalienable right because the founders knew that sentiment would attract widespread support among American colonists and their sympathisers. “Pursuit of happiness” was more than an attractive rhetorical device in a context where an inalienable right to liberty might have been interpreted in civic republican, rather than Lockean terms.
Given the meaning of the pursuit of happiness in 18th century America - influenced by Locke, Hutcheson, Blackstone and Franklin, among others – it is easy to understand why it would have been widely recognised as a natural right.
Pursuit of happiness was widely perceived in terms that have a great deal in common with the activity of human flourishing, as perceived by Aristotle and his followers.
Posted by Winton Bates at 3:57 PM