Where does the money come from to pay for education in PNG?

I didn’t have any intention of thinking about economics a few weeks ago when I was on a cruise ship, the Sun Princess, visiting Papua New Guinea and the Solomon Islands. It just happened.


If you spend a lot of your life thinking about anything you find interesting you don’t necessarily stop doing that just because you are enjoying a holiday. That is what I tell myself anyhow.


One of the reasons people go on cruises, like the one I recently enjoyed, is to see something of the culture of the people in the countries they visit. That isn’t important to everyone. Some people are more interested in scenery, bush walking, swimming, diving etc. Others just want to enjoy the amenities offered by a floating hotel.


A substantial proportion of people on our cruise were interested in local culture and history. That judgement is based largely on attendance at the lectures offered on those topics. There were not many spare seats available in the theatre seating a few hundred people – my guess is about a quarter of passengers attended the lectures. In addition, videos of the lectures were also available for viewing in passenger cabins.


Of course, when cruise ship passengers visit any small community they don’t get to observe people going about their normal daily activities. The arrival of the cruise ship disrupts normal activities. People who usually spend their time gardening, fishing or making handicrafts become merchants, guides and entertainers. Inevitably, the role of tourists as consumers and potential benefactors influences the culture they observe.


I don’t wish to imply that the cultural experiences we were offered were not authentic. The cultural festival staged for our benefit in Alotau provided a sample of traditional singing and dancing. The houses we saw on Kiriwina Island were places where people lived; the gardens provided food that people relied on for subsistence; the canoes we saw were normally used for fishing. I didn’t get the feeling of visiting a theme park that I had at times a few years ago on an Alaskan cruise (that was nevertheless enjoyable). 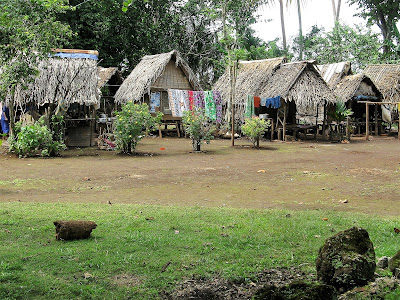 Some houses on Kiriwina Island


Of the places we visited, on Kiriwina lives of the people have been least affected by western influences. Even there, however, a group of village children, who were dressed traditionally, were raising money from the tourists by singing “Twinkle, Twinkle Little Star”. When I suggested to my guide, a year 10 student at the local school, that this song was part of a universal culture, he expounded eloquently on the importance of preserving local culture. I agree with him and hope tourism will help to preserve local culture. For my guide and most locals, however, the highest priority in obtaining money from tourists was to help fund education.


Wherever we went, people were raising money to fund local schools and pay school fees. From what I have heard when I was working in PNG a few years ago, the funds raised from tourists do not all end up being used for the purpose for which funds were donated. However, there is no doubt that education is widely seen by parents as a way for their children to obtain a better future. The children in some of the groups performing for tourists on Doini Island seemed to be doing a good job of raising money by entertaining tourists whilst also helping to preserve local culture. 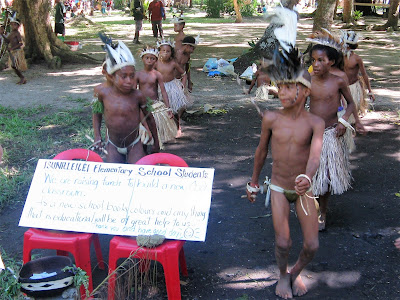 
The main reason why the government does not do more to fund education and health services is because PNG is a low-income country, lacking the tax revenue base that would be required to fully fund schools and basic health services. Politicians have promised to increase funding but have not delivered on those promises. If taxes were raised that would have an adverse impact on incentives - including incentives for village people to become involved in the market economy - and be unlikely to raise much additional revenue. Misuse of public funds is a serious problem, but it is unrealistic to expect that a huge pool of public funds would appear to fund education and health services if corruption could be eliminated.


During our visit to Rabaul I witnessed a discussion of education funding that left me feeling frustrated. The participants were an Australian tourist and a local tour guide. The discussion occurred on a small bus taking a group of tourists to see the area that had been devastated by the eruption of Mount Tavurvur in 1994. 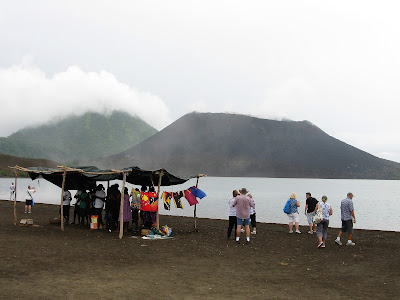 Visiting a volcano at Rabaul


When our guide told us that she felt fortunate to be able to take on casual work as a tourist guide to help pay for the education of her children, the Australian tourist expressed the view that the PNG government should be paying for education. She went on to tell everyone how incredibly lucky we were in Australia to have a government that paid for education, health services and pensions.


Other passengers remained silent, but a man sitting in the front seat next to the driver looked over his shoulder to see who the woman was who was doing all the talking. Unfortunately, I didn’t have the presence of mind to ask the vocal tourist how she thought our government funded education, health services and pensions.


As the cargo cult dies out in PNG, the magic pudding cult has continued to grow in Australia, apparently now even seeking converts in PNG. 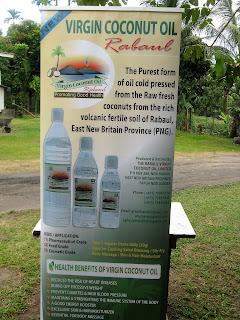 
The same tourist bus provided us with an opportunity to see a small manufacturing plant making Virgin Coconut Oil. I don’t know whether the product has the health benefits that are claimed for it, but the process by which the oil is extracted from fresh coconut meat looks as though it should produce a better product than the oil manufactured from copra exports. 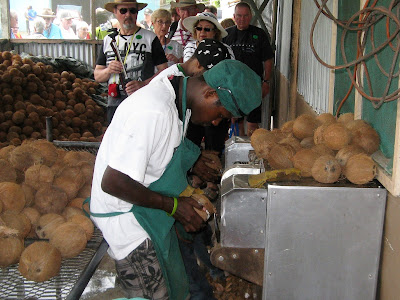 
Manufacturing plants like this one may have potential to generate more income for local communities than is possible by exporting copra. 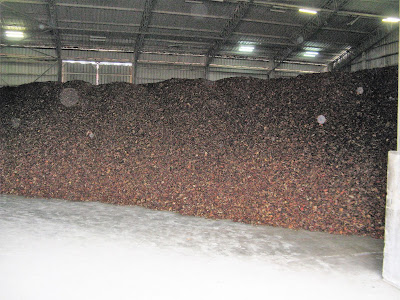 
If I let my imagination run wild it even seems possible that the manufacture of virgin coconut oil in Rabaul could be an example of the kind of development that could play an important role in enabling more widespread economic opportunities to emerge in PNG in the years ahead. If that can happen it might even be possible for village people to purchase better and more secure access to education, health services and the other things they want.


Coming back to earth, the manager of Virgin Coconut Oil Rabaul mentioned that the business had obtained assistance from a government agency serving grower interests, the Kokonas Indastri Koporesen (KIK). A question that raises is why such assistance is necessary if the venture has potential to be profitable and provide more attractive remuneration for labour than is otherwise available. I don’t know what services the KIK provided in this instance, but I am sure that in a more normal market economy those services could have been provided by commercial enterprises with relevant technical knowhow, marketing links and other relevant resources. So, what prevents potential commercial partners, including foreign firms, from linking up with local firms to undertake ventures of this kind?


The underlying problem, as I see it, is that the profit motive doesn’t work very well in an economic environment where investors have reason to fear that profits are not safe from potential predators, including some within government. The assistance provided by KIK to processing enterprises is valuable in demonstrating the potential for value adding activities, but does not address the underlying problem.
It is difficult to see how the underlying problem can be solved in the near future. It will take a lot more than just announcement of economic policy reforms. Meanwhile, perhaps greater economic opportunities could be generated if the KIK and other commodity boards were given a more explicit role to facilitate additional investment in agriculture and related processing activities.
Posted by Winton Bates at 10:06 AM