Paul Kelly’s article ‘Blessed be the egoistic individuals’, a gated article published in The Weekend Australian (July 8-9, 2017) asserts that the decline in professed Christianity in Australia from 88 per cent of the population in 1966 to 52 per cent in the most recent census is an epic change that “has profound consequences for society”. I agree with him, although I suspect that the change might be exaggerated by greater honesty in the responses in recent censuses. I also agree with Kelly’s claim that there is a link between decline of Christianity and the emergence of a situation where “politics is being asked to assume a role and burden utterly beyond its capacity and guaranteed to leave community-wide unhappiness”


In my view, the linkage between the decline of Christianity and inflated expectations of politics arises from the growth of the welfare state. As people have come to rely more heavily on government, faith in government has tended to replace faith in God. Increased dependence on government for education, support for the elderly, health care etc. has been associated with a decline in family responsibilities, a decline in support provided by civil society, and a decline in individual responsibility.


However, Kelly takes a different view. He identifies individualism as the culprit. In taking that view he overlooks the contribution of Christianity to recognition of the worth of the individual human.


To explain I will first sketch out Kelly’s line of argument:

Interestingly, what Kelly refers to as “obsession about individual autonomy in every aspect of life” corresponds fairly closely to “emancipative values”, as measured on the vertical axis of the chart shown below. Emancipative values reflect concern about such matters as personal autonomy, respect for the choices people make in their personal lives, having a say in community decisions, and equality of opportunity. As well as supporting gender equality, people who have emancipative values tend to consider independence and imagination as more desirable child qualities than obedience, and to be tolerant of divorce, abortion and homosexuality. 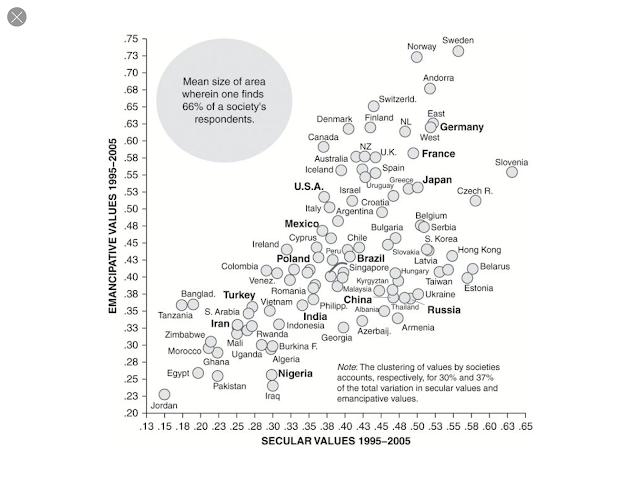 "The New Cultural Map of the World”, from Christian Welzel, Freedom Rising: Human Empowerment and the Quest for Emancipation, Figure 2.3, 2013.


In equating self-realisation with narcissism, Kelly is casting his net very broadly indeed. His net not only catches the self-esteem advocates - who deserve criticism, in my view, for leading people into narcissism – but also all those who have followed in the footsteps of Abraham Maslow and Carl Rogers.


In fact, every program for self-improvement that draws inspiration from Aristotle is caught in Kelly’s net. All such programs are based on the potential for self-realisation – the idea that humans have a natural orientation toward pursuit of their own ultimate good and that it is desirable for individuals to realise the potential of their character or personality. While I can claim little knowledge of the writings of Thomas Aquinas, I understand that he expressed similar sentiments.  I also have the impression – based on distant childhood memories - that acceptance of personal responsibility for character development was one of the messages of the Parable of the Talents.


In staging such a broad attack on individualism, Kelly overlooks the contribution of Christianity to recognition of the intrinsic worth of the individual human. He might find Larry Siedentop’s book, Inventing the Individual, discussed here, to provide a useful reminder of the historical role played by Christianity in liberating individuals from constraining perceptions of their personal identities as defined by social roles, and in encouraging recognition that individuals have consciences that deserve to be respected.


I agree with Kelly’s comments about the epidemic of narcissism and most of the other points he makes. However, I am concerned about his claim that the U.S. Supreme Court legitimised narcissism by separating the idea of freedom from moral duty, and tying it to personal self-realisation and self-esteem.


Who knows what the U.S. Supreme Court was claiming? It is certainly not clear to me that it was claiming that the concepts of “the mystery of life” that individuals “have the right to define” for themselves have the status of “moral truths”. Kelly’s comments left me wondering what role he sees for legislators and courts in enforcing compliance with “moral truths”. Does he really think that freedom should only be about being free to do the things that one has a moral duty to do?


I have read and commented on Paul Kelly’s views on individualism only because many of his other contributions to Australian journalism have been excellent. A few years ago I expressed the view that, over several decades, he had developed a formidable reputation as Australia’s leading ‘big picture’ journalist. More recently I described him as Australia’s most widely respected journalist.  I stand by those views. I don’t think anyone else has been more successful in identifying the defining elements of the changing political landscape in Australia.
Posted by Winton Bates at 5:03 PM