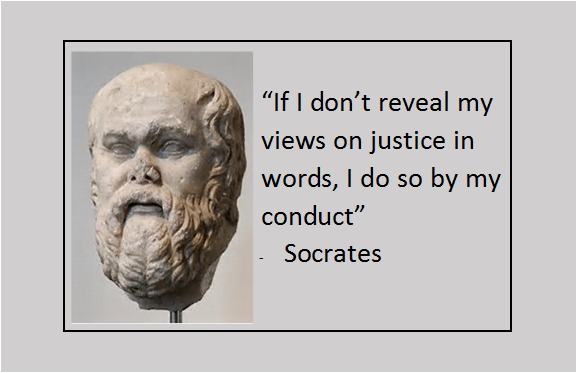 This guest post by Leah Goldrick was first published on her excellent blog: Common Sense Ethics

Peace and justice are two goals which the politically inclined often seek, but they are simultaneously inner qualities which a philosophical person must posses, not just external conditions which we would like to see in the world. If we want to see the world change we must first concern ourselves with healing our own lives.

In Xenophon's Memoirs of Socrates, Hippias tells Socrates that instead of always asking questions about justice, he would do better simply to say, once and for all, what justice is. Socrates replies: "If I don't reveal my views on justice in words, I do so by my conduct." A modern parallel to Socrates' statement can be found in Martin Luther King's quote, "Peace is not merely a distant goal that we seek, but a means by which we arrive at that goal.”

What Socrates wanted to show is that we can never understand justice if we do not live it. King similarly noted that we won't achieve peace through our actions if outwardly we are irrationally angry and inwardly we are a mess of anxiety and neurosis. We can't expect the world to give us better than we give the world.

In antiquity, philosophy was a way of life akin to therapy or care of the soul. Socrates, the Cynics, Aristotle, the Epicureans and the Stoics all stressed that we can achieve autarkia, or inner freedom independent of external events.[1] Autarkia is a self-sufficiency and peace of mind where we feel that we lack nothing, relying on our inner resources. To be liberated, we must turn our attention to the revolution within and to what we can control; our thoughts, emotions, and actions. In order to obtain autarkia or inner freedom, we must train ourselves for it.
Ancient Philosophy As a Way of Life
Pierre Hadot was a historian of philosophy who is also just as rigorous a philosopher. He was aware of limits of specialization in academia and sought cross-specialization within Classics. In his excellent book Philosophy as a Way of Life, Hadot maintains that philosophy did not change in essence during the entire course of antiquity. However, it evolved away from a therapeutic, lived experience to a theoretical discourse during the Medieval and Modern eras.

Hadot is explicit that in antiquity philosophy was understood as a way of life. Ancient philosophy is therapy for the soul - the goal is very different from that of much modern philosophy, which is primarily an academic exercise in exegesis, although not exclusively so according to Dr. Greg Sadler.

For the Epicurean, Hadot notes that one form of philosophical therapy consists of bringing one's soul back to joy from the worry of living. Unhappiness comes as a result or worrying about things which are not to be feared or are beyond our control. By contrast, inner freedom or autarkia is deliverance from worry about things we cannot control. Worry about external conditions often takes precedence in our lives, often to the point that we neglect what is going on inside. [2]
Politics as Externals Beyond Our Control
One external that philosophical people often fixate on - and for good reason considering the many problems in the world - is politics. However fixation on politics can be a dangerous thing if we neglect to care for our own souls and to remind ourselves that for the most part, political issues fit squarely within the realm of things which we do not control.

This dilemma isn't new. In Plato's Symposium, Alcibiades remarks that Socrates has made him admit, "While I am spending my time on politics, I am neglecting all the things that are crying for attention in myself."[3] He goes on, "Socrates makes me admit to myself that even though I myself am deficient in so many regards, I continue to take no care for myself but occupy myself with the business of the Athenians."[4]

Socrates expected Alchibiades - and each person - to be excellent and rational and to care for their internal disposition. In this same vein, Hadot quotes George Friedmann’s La Puissance de la Sagesse (The Power of Wisdom) on the necessity of such a philosophical disposition for a politically oriented person:
Try to get rid of your passions, vanities, and the itch for talk about your own name, which sometimes burns you like a chronic disease. Avoid backbiting. Get rid of pity and hatred. Love all free human beings. Become eternal by transcending yourself.
This work on yourself is necessary; this ambition justified. Lots of people let themselves be wholly absorbed by militant politics and the preparation for social revolution. Rare, much more rare, are they who, in order to prepare for the revolution, are willing to make themselves worthy of it.[5]

What is being articulated here is a revolution inside, which is more important than political revolution. It is very difficult to live everyday life in a philosophical manner. We often fixate on the external conditions of life while neglecting what is going on inside of us. Philosophical exercises can us help in this regard.
Philosophical Exercises for Care of the Soul
Wisdom can be acquired through work on ourselves via ongoing philosophical or spiritual exercise. One philosophical exercise which we can practice everyday is essentially present moment awareness or attention to what we are doing, giving each thing its due. It's what Marcus Aurelius was talking about when he said:
Everywhere and at all times, it is up to you to rejoice piously at what is occurring at the present moment, to conduct yourself with justice towards the people who are present here and now, and to apply rules of discernment to your present representations, so that nothing slips in that is not objective. [6]

In Philosophy as a Way of Life, Hadot comments on therapeutic value of writing. Hadot notes that writing or keeping a journal helps you explain yourself to yourself. Writing takes the place of another person's eyes. The writer instinctively feels as though he is being watched. This process helps makes what was confused or subjective more objective and universal for the writer. One observes one self to see what progress they have made using writing as an exercise.

The final philosophical exercise to care for our souls is inner transformation. This is what Socrates and Martin Luther King implored us to do; change our way of seeing and living so that we are self-sufficient inwardly and so outwardly we become our political ideal. To understand our object, we must become our object. To understand justice, we must be just in our dealings with others. To get peace, we must have peace in our own lives:
The trick is to maintain oneself on the level of reason, not to allow oneself to be blinded by passions, anger, resentment or prejudices. To be sure, there is an equilibrium - almost impossible to achieve - between the inner peace brought about by wisdom, and the passions to which the sight of injustices, sufferings, and misery of mankind cannot help but give rise. Wisdom, however, consists in precisely such an equilibrium, and inner peace is indispensable for efficacious action. [7]

You May Also Like: The Ancient Greek Got Happiness Right
Why Rushing Through Life Makes You Less Likely to Help Others
5 Insightful Ways to Identify and Change Your Character Flaws
Posted by Winton Bates at 11:45 AM