How do we know what we value? 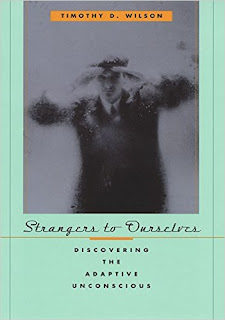 
The context of the quote is a discussion of introspection as a means by which people can “try to decipher their feelings, motives, traits, or values, not to mention what they want for dinner”. The “beam of the flashlight” refers to a metaphor in which the mind is thought of as a cave, with consciousness constituting those objects that are not currently in the beam of the flashlight. The quote seems to imply that our values and preferences are not necessarily easily accessible by just focussing our awareness inwards.


Tim Wilson argues that because people “cannot directly observe their nonconscious dispositions, they must try to infer them indirectly, by, for example, being good observers of their own behaviour”. He suggests that when we discover important truths about ourselves through introspection we do so by constructing stories about our lives, much as a biographer would. Trying to access unconscious goals and motives results in “a constructive process whereby the conscious self infers the nature of these states”.


I felt somewhat bemused when reading that - presumably because of my training as an economist. The idea of being able to discern our values and preferences from our behaviour seems to have more in common with the neoclassical economists’ notion of ‘revealed preference’ than with the view of many psychologists (and behavioural economists) that people are prone to make irrational choices because of cognitive biases that reflect non-conscious influences.


Of course, Tim Wilson does not suggest that the adaptive unconscious always makes the right choices for us. He notes that it is important to distinguish between “informed and uniformed gut feelings” by gathering as much information as possible to allow your “adaptive unconscious to make a stable, informed evaluation rather than an ill-informed one”.  His main point seems to be that in order to make good decisions, e.g. in choosing a spouse or buying a home, you need to avoid over-analysis by the conscious mind.


So, how can people bring their values to awareness in order to engage in self-improvement exercises? Tim Wilson has some suggestions, but before considering them it might be useful to consider approaches adopted by some psychologists engaged in therapy and personal training.


Acceptance and Commitment Therapy (ACT) places a heavy emphasis on living according to values, so the approach adopted by ACT therapists might be of particular interest. One approach used in ACT is the life compass, which ask people questions to elicit values in various domains of their lives – relationships, health, work, leisure etc. People are asked what is important or meaningful to them, what sorts of strengths or qualities they want to develop and what they want to stand for. That approach obviously works if you can find what you value by just shining the flashlight into your cave. But to do that you must have a fair amount of self-knowledge already, and you would probably have constructed a story about where your values have come from.


ACT offers a range of techniques to elicit values if they don’t readily come to consciousness. One technique noted by Russ Harris in ACT Made Simple is to imagine what you would love to hear people say about you, and what you stand for, in short speeches at your 80th birthday party. (Dr Harris presumably doesn’t have many readers who are over 80.) In The Reality Slap, he suggests that it is also possible to elicit values by remembering a “sweet spot”, a memory that encapsulates some of life’s sweetness for you. After appreciating that memory, he asks people to notice the personal qualities they were exhibiting and what this reveals about the personal qualities they would like to embody.


The Authentic Happiness web site (stemming from Martin Seligman’s book of that name) has, among other things, an extensive questionnaire that enables people to discover their ‘signature strengths’. People taking the questionnaire are asked to what extent 240 statements describe themselves. The statements seem to be largely about dispositions rather than past behaviours, so seem to assume prior knowledge of dispositions.


The Enneagram Institute offers people an opportunity to discover more about their personality type through a questionnaire (the RHETI) which asks participants to choose between 144 paired statements relating to their past behaviour. One of the potential benefits of this approach is that it seems to offer a way for people to identify values that can guide them toward attainment of higher levels of personal development, without having to attempt to make fundamental personality changes.  For example, a person who has a persistent desire for self-control could see himself, or herself, as having many of the characteristics of a Reformer, and thereby see potential for growth by becoming more reasonable, and progressively acquiring greater wisdom. Some more examples might help to make the point: a person who seeks to avoid conflict through accommodation might have many characteristics of the Peacemaker, and see potential for growth by acknowledging her or his peacefulness and seeking to become indomitable; a person who is highly defensive much of the time might have many characteristics of a Loyalist, and see potential for growth by becoming more trusting, cooperative, reliable and courageous; and a person who is restless and constantly seeking stimulation might have many of the characteristics of an Enthusiast, and see potential for growth by becoming more productive and more grateful. Similar personal growth paths exist for the five other personality types.


A couple of the approaches described above bring values into conscious awareness through an explicit consideration of past behaviour. The sweet spot approach builds on selection of a particular memory, whereas the RHETI may help people to identify their potential by providing them with a systematic way to understand their past behaviour and personality. Unfortunately, although the RHETI is being widely used in personal training exercises, its predictions do not yet appear to have been subjected to a great deal of rigorous scientific testing.


One approach that Tim Wilson advocates is Pennebaker’s exercise which involves writing about the deepest thoughts and feelings associated with an important emotional issue. Although writing about emotional experiences is distressing in the short run, it apparently has positive long-run effects. The exercise seems to help people make sense of a negative event by constructing a meaningful narrative that explains it. A possible downside of this approach is that some people may dwell on negative life experiences by constantly revising their narratives. I expect that some people might also have a tendency to fuse with stories that make their lives miserable.


Tim Wilson acknowledges that some narratives are better than others. He writes:


"As with any biography, there are multiple ways of telling the story. A good biography, though, has to account for the facts of the person’s life and capture his or her inner goals and traits. The better a story does at accounting for the “data” of the person’s adaptive unconscious, the better off the person is. By recognizing their nonconscious goals, people are in a better position to act in ways to fulfill them, or to try to change them."


How can we change our non-conscious states in order to match our more positive self-stories? Tim Wilson suggests we follow Aristotle’s advice to acquire virtues by first putting them into action. We can change our feelings and traits by changing our behaviour. In order to “change some aspect of our adaptive unconscious, a good place to start is deliberately to begin acting like the person we want to be”.
Posted by Winton Bates at 6:30 AM

Hi Winton, what a great post. I'll have to check out this book. It's really interesting that Wilson says one of the unconcious' functions is to warn us of danger. I've heard that from a totally different source and blogged about it. Not one of my more popular posts either: http://www.commonsenseethics.com/blog/when-being-too-nice-could-get-you-killed