Can your view of human flourishing be summed up in a selection of quotes? 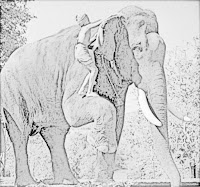 The quotes selected for this post are related specifically to individual flourishing or personal development. I will follow this up later with a selection of quotes relating to the social conditions that favour human flourishing.
Rather than selecting the most inspirational quotes I can think of I have selected quotes that seem to support what I hope is a coherent set of propositions about human flourishing.

1. Happiness is the final end to which humans are naturally attracted.
“Since there is evidently more than one end, and we choose some of these (e.g. wealth, flutes …) for the sake of something else, clearly not all ends are final ends; but the chief good is evidently something final. ...
Now such a thing happiness [living well and doing well], above all else, is held to be; for this we choose always for itself and never for the sake of something else …” Aristotle, Nicomachean Ethics, Book 1, 7.

2. Reflection tells us that there is more to happiness than having a successful life.
“For both ancients and moderns, the starting point for considering happiness is a conventionally successful life which the agent finds satisfactory. … We have no concept which readily covers both the unreflective notion of success in life from which we start, and the revised notion of success in life with which we end if and when we have appropriately revised our priorities, and given morality its appropriate place in our life. The fact that we lack such a concept doubtless owes something to our tendency to see the pursuit of morality as being always likely to be in tension or conflict with the pursuit of other ends.” Julia Annas, philosopher, The Morality of Happiness, 1993, p 453-4.

3. Human flourishing is the exercise of practical reason to actualize human potentialities.
“Ontologically considered, human flourishing is an activity, an actuality, and an end that is realized (or a function that is performed) through the self-directed exercise of an individual’s rational capacity. … As an actuality, human flourishing consists of activities that both produce and express in a human being an actualization of potentialities that are specific to the kind of living thing a human being is and that are unique to each human being as an individual.” Douglas Den Uyl and Douglas Rasmussen, philosophers, The Perfectionist Turn, 2016, p 45.

4. We feel elevated when we contemplate the natural beauty of our world and the kindness of other humans..
Many words have been written to express such thoughts, but the those that come to mind at the moment are the lyrics of “What a Wonderful World”, a song written by Bob Thiele (as "George Douglas") and George David Weiss, first recorded by Louis Armstrong, and released in 1967. You can view the lyrics and listen here.

5. We are responsible for setting the internal rules that determine our behaviour.
“The brain is an evolved system, a decision-making device that interacts with its environment in a way that allows it to learn rules to govern how it responds. It is a rule-based device that works, fortunately, automatically.” Michael Gazzaniga, neurologist, The Ethical Brain, 2005, loc 1278.

6. Individuals flourish as their reason and emotions learn to work in harmony.
“We sometimes fall into the view that we are fighting with our unconscious, our id, or our animal self. But really we are the whole thing. We are the rider, and we are the elephant. Both have their strengths and special skills” p 22.
“Reason and emotion must work together to create intelligent behaviour, but emotion (a major part of the elephant) does most of the work” p 13.
“virtue resides in a well-trained elephant” p 160. Jonathan Haidt, psychologist, The Happiness Hypothesis, 2006.

7. Unpleasant thoughts and feelings are a natural part of life.
“So here is the happiness trap in a nutshell: to find happiness, we try to avoid or get rid of bad feelings – but the harder we try, the more bad feelings we create” p 40.
“As you open up and make space for these feelings, you will find they bother you much less, and they ‘move on’ much more rapidly, instead of ‘hanging around’ and disturbing you” p 45.
“A rich, full and meaningful life comes about through accepting your thoughts and feelings instead of fighting them, and taking effective action, guided by your deepest values” p 74.  Russ Harris, MD, The Happiness Trap, 2007.

8. Grant yourself the freedom to pursue your goals.
“The easiest way to convince yourself that you don’t have mobility is to form ironclad concepts of yourself and how you do things …  . Freedom is about realizing that you always have the choice to start moving in any desired direction regardless of your past.” Timothy Gallwey, coach, The Inner Game of Work, 2000, p 126.

9. You get to choose whether to be content with past achievement or to stoke motivation.
“Once you have taken the first two steps in self-control – setting a goal and monitoring your behaviour – you’re confronted with a perennial question: Should you focus on how far you’ve come or how much remains to be done? There is no simple, universal answer, but it does make a difference … . For contentment, apparently, it pays to look how far you’ve come. To stoke motivation and ambition, focus instead on the road ahead.” Roy Baumeister and John Tierney, psychologists, Willpower: Rediscovering our Greatest Strength, 2011, Loc 1804

10. Be yourself!
“The paradox that frees you from all the prisons of self and the worries about image and approval is that the highest development of self is self-forgetfulness. When you fully integrate the awareness that it’s not about you, your focus shifts. Now you realize it’s about the experience, the contribution, the exploration, the discovery, and transformation. Now you’re free to be fully present without double-tracking in your head worrying about whether you have their approval.” Michael Hall, psychologist, Unleashed, 2007.
Posted by Winton Bates at 7:00 AM