Should foreigners be allowed to buy agricultural land in Australia? 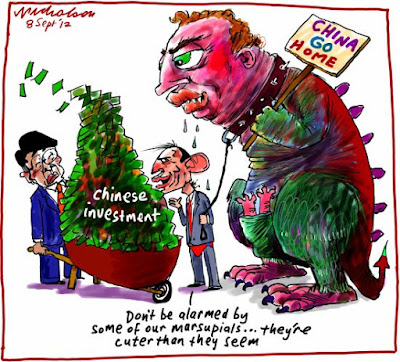 Cartoon by Nicholson from “The Australian” newspaper: www.nicholsoncartoons.com.au

I am surprised by the frequency with which concerns about foreign ownership of land in Australia are being expressed to me by friends who have fairly sensible views on most other issues. It is almost as though rationality disappears whenever foreign ownership and agricultural land become linked in their minds.

My response has been along the lines that foreign ownership of land in Australia isn’t something we should be worried about because it has been occurring since the beginning of European settlement and, these days, accounts for a small proportion of total agricultural land. (ABS data indicate that about 99% of Australian farm businesses are fully Australian owned and about 90% of farmland is fully Australian owned.)

That usually provokes the assertion that Chinese ownership is new and worrying.

At that point I am asked to explain how foreign ownership of agricultural land in Australia serves Australian interests.

That might seem like a reasonable question to ask, but it is actually a debating trick that puts the onus of proof in the wrong place. The basis of a market economy is that economic transactions are undertaken because they are mutually beneficial to sellers and buyers. If some third party considers that a particular kind of transaction should not take place, the onus should be on that party to make the case.

If an Australian wants to buy the property at a lower price, that is not a legitimate argument for preventing the property from being sold to a foreigner. If their sole objection to the transaction is that the purchaser is foreign, why is that relevant?

Unfortunately, the views I have presented above tend not to have been particularly persuasive. My friends seem to want me to explain how Australians can benefit from foreign ownership of agricultural land. Well, now I have now calmed down a little, I will try to do that.

The most obvious way Australians benefit from foreign land ownership is from associated investments which create increased employment opportunities, and generate additional wealth, some of which adds to government revenues and enables more services to be provided to Australians.

So, what about the situation where the foreign owner does not undertake any new investment? In that situation it is quite likely that the former owner will invest the proceeds of the sale in ways that will generate additional income. It is also likely that the new owner will find ways to use the resources more productively, perhaps by using better management practices. The fact that a new owner is prepared to pay more than the former owner’s reserve price usually implies that the new owner can see potential to generate more income from the property than the former owner.

Is there any more reason to question the benefits to Australians of foreign investment in agricultural land than any other foreign investment, or of new investment in agricultural land by Australians? I don’t think so, but various arguments to the contrary are raised. It has been suggested that ownership that is encouraged by foreign governments to improve food security may endanger future food security of Australians. It has also been suggested that enclaves of foreign ownership could have a deleterious cultural impact on rural communities. The people who promote those views seem to overlook the fact that foreign ownership or agricultural land in Australia is a small proportion of the total.

The opponents of foreign ownership of agricultural land also raise such issues as whether foreign firms pay tax, whether they are able to import foreign labour more easily, and whether they can be trusted to comply with Australian labour and environmental regulations. Those arguments seem to me to be scraping the barrel. It is hard to see why Australian tax and regulatory authorities should have any greater difficulty in dealing with foreigners than with Australians.

As far as I can see there is no case for foreign ownership of agricultural land in Australia to be subjected to more stringent regulation than any other foreign investment in this country.
Posted by Winton Bates at 7:30 AM

Very useful conversation. This is really very helpful to understand about buying agricultural land by foreigners. Thank you.

Nice Post thanks for sharing....! Buying Property in Australia For Foreigners

It is a great website.. The Design looks very good.. Keep working like that!.
Sindh irrigated Agriculture