What does it mean to be thriving?

I am asking myself that question because I am trying to come to grips with the findings of the new Gallup-Healthways Global Well-Being Index.

The top ten countries in the index are as follows:

When Scott Sumner looked at that ranking he wasn’t surprised to see some of the countries of Latin America do well, but he was shocked to see Sweden bracketed by Guatemala and El Salvador.  His comment:
“Just to be clear, I’m NOT saying that the people in those two countries are not just as happy as the Swedes; for all I know they are happier.  I have no idea how to measure happiness. But if you are talking about country rankings, people are going to assume you are making some sort of statement about socio-economic/political systems.  And if a large share of the people in these highly successful societies are risking murder, rape and dying of thirst in order to flee to a country where they don’t speak the language, so that they can get jobs cleaning toilets or picking vegetables in the hot sun all day long, then I have to wonder whether these rankings actually mean much of anything”.

In Free to Flourish I made the point that if you want to measure the quality of different societies it makes more sense to attempt to define the characteristics of a good society and attempt to measure the extent to which societies have those characteristics, rather than to attempt to infer the quality of a society solely from happiness indexes. Nevertheless, it comes as a surprise when a high proportion of the population is assessed to be thriving in societies from which large numbers of people wish to migrate to seek better opportunities.

When I set out to find out the reasons for the results obtained by Gallup-Healthways my first thought was that it might reflect the method used to rank countries. The criterion used is the percentage of the population that are thriving on the basis of three or more of the elements defined above. However, when I constructed an index by averaging the scores on all five elements (giving thriving a rating of 3, struggling a rating of 2 and suffering a rating of 1), El Salvador remained in 7th place and the ranking of Guatemala remained fairly high (falling from 9th to 14th).

My second thought was that people would be unlikely to give equal weight to the five specified elements in assessing the quality of their lives. In order to assess what weights might be appropriate I used regression analysis to explain the old Gallup thriving index in terms of the five elements of the new index. The old Gallup index is based on the Cantril methodology under which survey respondents are asked to evaluate their own lives relative to the best and worst possible life. Under the old Gallup index the percentages of the population assessed to be thriving in El Salvador and Sweden were 36% and 68% respectively.

There is a problem with the use of regression analysis to obtain weights because the old and new indexes relate to surveys taken years apart, but that seemed to me to be a minor problem by comparison with use of equal weights.

The results of the analysis suggest that it might be appropriate to give a weighting of 40% to Purpose, 30% to Financial, 30% to Physical, and zero weight to Social and Community. The rankings on that basis are:


At this point I have to acknowledge that the high rating given to El Salvador is unlikely to be a result of the methodology used for ranking, or failure to weight elements appropriately.

The problem is that while it is good to have positive emotional states or positive states of mind, thriving involves more than that. From observed behaviour it is obvious that humans see their ability to thrive as related to objective circumstances such as incomes, life expectancy and education – which are reflected in the UN’s Human Development Index (HDI) – as well as to their emotional states.

Anyone interested in identifying the countries in which people have the best opportunities to thrive might find the following chart of some interest. 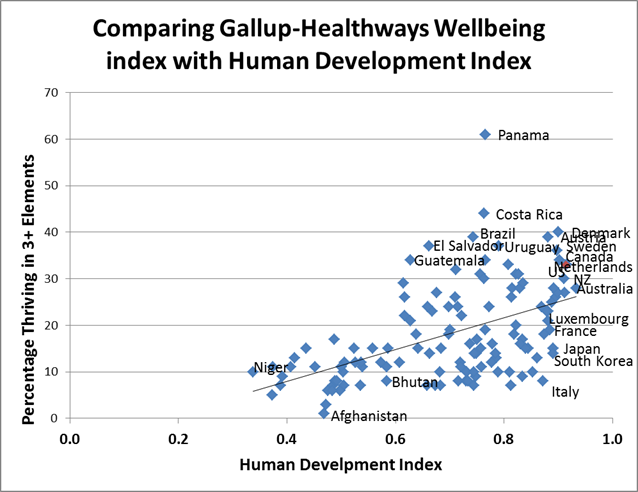 Email ThisBlogThis!Share to TwitterShare to FacebookShare to Pinterest
Labels: Economic development, Frames and beliefs, free to flourish, The good society, Well-being measurement issues, What is happiness?