What is the secret of happiness?

Now that I have your attention I will do my best to keep it – but you cannot expect me to attempt to answer such an important question in just a few paragraphs.

It might be appropriate to begin by issuing a health warning about my ability to answer such a complex question. I can claim a great deal of interest in the subject, but my expertise is limited.

In my view human happiness is ultimately about having a meaningful life – one that is meaningful to the person living it - but that is certainly not a secret. Wise people have been saying similar things for thousands of years.

What I am about to write about now has to do with momentary happiness and the way we pursue our goals. It seems like a good idea for individuals to pursue their goals in ways that enable them to experience many happy moments and not too much disappointment along the way.

Some recent research on the links between risk-taking, expectations, rewards and happiness has produced some interesting findings. I propose to present some of those findings in a somewhat novel way and to combine them with some additional speculations.

The research by Robb Rutledge (of University College, London) and colleagues involved presenting participants in a decision-making game with choices between certain and risky options and repeatedly asking them to report their momentary happiness. The study used fMRI to examine the relationship between happiness reports and neural responses. The study also made use of the Great Brain Experiment app, to test results on large numbers of people playing the decision-making game on smart phones and tablets. (The game is actually still available the Great Brain Experiment site and good fun to play.) The research is reported in an article entitled ‘A Computational and neural model of momentary subjective well-being’, recently published in PNAS. Good summaries of the article have been published by ‘The Telegraph’ and ‘The Atlantic’.

The study found that momentary happiness is determined by the combined influence of recent reward expectations and prediction errors arising from those expectations. The happiness equation takes the following form:
Happiness = baseline average mood + what you can settle for (CR) + what you'll get on average if you gamble (EV) + the difference between that and what you actually get (RPE).
The equation takes account of the fact that memory fades, so that more recent events have a larger impact on happiness than earlier events.

The findings suggest that happiness depends not on how well things are going, but on whether they are going better than expected.

It is a mistake to interpret the findings as in the headline in one paper: “The secret of happiness? LOWER your expectations: A good day is when things are going better than expected”. One reason the results don’t imply that people should lower their expectations is because the measure of expectation used is average reward, rather than a direct measure of optimism or pessimism. It would be slightly more accurate to interpret the findings as suggesting that people can avoid disappointment by staying within their comfort zone instead of choosing riskier options that involve high average (expected) reward. But that interpretation is also inadequate because it overlooks the pleasure that people get from anticipating a high reward (even if the outcome is not as good as expected) and also overlooks the buzz that some people get when they gamble (choose an option with high potential reward but lower average reward) and win.

I have attempted to map out some relationships between expectations, forecast errors and happiness in the following two charts. 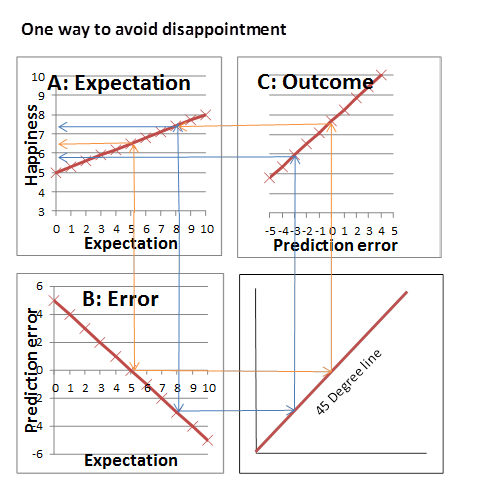 So, the question now arises of how you should respond to that disappointment. One way to respond is to get back into your comfort zone and adopt a strategy involving lower expectations and no prediction error. That strategy avoids disappointment but it means that you forgo the pleasure of contemplating the happiness that you could expect, on average, under the original strategy.

An alternative response is depicted in the second chart. That involves sticking with the original strategy but improving your luck. An improvement in luck is shown by a shift in the relationship in Quadrant B. By improving your luck you are able to achieve an outcome better than expected and end up happier than you expected.

So, the secret of happiness is to get lucky!

Some readers might question the wisdom of that on the grounds that most people tend to be optimistic in their expectations, relative to average reward (or mathematical expectation). However, the findings of a recent paper by Gigi Foster and Paul Frijters, which examines the formation of expectations by undergraduates at two Australian universities, suggests that optimistic expectations are benign. The results suggest that apart from their direct contribution to happiness, optimistic expectations motivate people to work harder to achieve their goals.

So, adding all that together, the secret of happiness would be to adopt the strategy that you expect to yield greatest rewards over the longer term, and to back your expectations by staying the course and working hard. But you already knew that!  And something important seems to be missing.

The real secret of happiness, in my view, is to play the inner frame games of self-acceptance and cheerfulness, and to adopt an attitude of awe and fascination about the world.


Postscript:
I linked to the wrong article by Gigi Foster and Paul Frijters. An abstract of the article I meant to to link to can be found here.
Posted by Winton Bates at 7:00 AM

Email ThisBlogThis!Share to TwitterShare to FacebookShare to Pinterest
Labels: Frames and beliefs, Well-being and utility, Well-being measurement issues, What is happiness?

We are bombarded with advertising that usually equates happiness with having the right car or clothes. In recent years our purchasing power has increased, which means we can afford to buy more things and yet buying more stuff has not made us any happier, because happiness is not for sale