Can the "best possible life" get much better?

Someone is sure to try to tell me that the best possible life is a bit like Groundhog Day – it is as good as life can get. If I thought that the quality of life was just about emotional states I would agree. But there is more to life than emotional states, even though emotional states are very important.

The question is meant to be about the extent to which people perceive that it is possible for the quality of the best possible life to continue to get better, e.g. as a result of further advances in medical science or communications.

In happiness surveys people are often asked to evaluate their lives according to the Cantril ladder. The relevant question, as asked in Gallup’s World Poll, is as follows:
“Please imagine a ladder with steps numbered from zero at the bottom to 10 at the top. The top of the ladder represents the best possible life for you and the bottom of the ladder represents the worst possible life for you. On which step of the ladder would you say you personally feel you stand at this time?”

I have not been able to find research that directly relates to the question of how perceptions of the best possible life differ between countries and change over time. Perhaps I haven’t looked hard enough, or in the right places. If any readers can steer me in the direction of relevant research I would be most grateful.

A few years ago, Angus Deaton, who has been associated with the Gallup World Poll, speculated as follows about the meaning of “the best possible life”:
“A simpler interpretation of the Gallup World Poll findings is that when asked to imagine the best and worst possible lives for themselves, points "10" and "0" on the scale, people use a global standard. Danes understand how bad life is in Togo and other poor places, and the Togolese, through television and newspapers, understand how good life is in Denmark or other high-income countries.
Such an interpretation is also consistent with Easterlin's conclusion that the "best possible life for you" is a shifting standard that will move upward with rising living standards. Thus, we might expect the Danes to continue to maintain an average rating of 8 as national income rises, provided they stay in the same position in the global income rankings. If this interpretation is correct, it would be an indication of how much the globalization of information has affected the perceptions of populations worldwide - because the consistently high correlation between income and satisfaction could not have existed in its absence.”

I have some problems with the first paragraph of the quote. Given the wording of the question, it seems likely that perceptions of the best possible life are strongly influenced by knowledge of what kinds of lives it might be possible for the respondent to live. There seems to be quite strong evidence that the reference groups that rural people in China use to evaluate their own satisfaction with life are their fellow-villagers. The reference group changes when people move to the city. (See paper by John Knight and Ramani Gunatilaka.) That seems to be related to the “paradox of happy peasants and frustrated achievers” discussed by Carol Graham. If people evaluate their lives according to a rural village reference point of the best possible life, they may not be overstating their happiness but they are basing their judgement of their well-being on imperfect knowledge of what is possible. In order to shed more light on such matters it would be useful to conduct surveys of migrants from rural to urban areas using the ACSA methodology discussed in a recent post.

When we consider high income countries, it seems reasonable to expect that perceptions of the potential for the best possible life to improve would be closely related to perceptions of whether today’s youth will have a better life than their parents. Gallup’s surveys for the United States suggest that from 1998 to 2008 around two-thirds of Americans were optimistic, and only one-third pessimistic, about whether today’s youth would have a better life than their parents. Since then, however, Americans have become equally divided on that question. That probably reflects ongoing economic uncertainty in the wake of the Global Financial Crisis.

It would be interesting to know to what extent people who consider themselves to be living the best possible life at present are optimistic about the potential for life to get even better. I don’t have access to the detailed Gallup data, but data from the World Values Survey relating to people who are “completely satisfied” with their lives (score of 10 on the WVS rating scale) may be relevant. The following chart is based on data for high income countries in the latest round of surveys (2010-14) who claim to be completely satisfied with their lives. 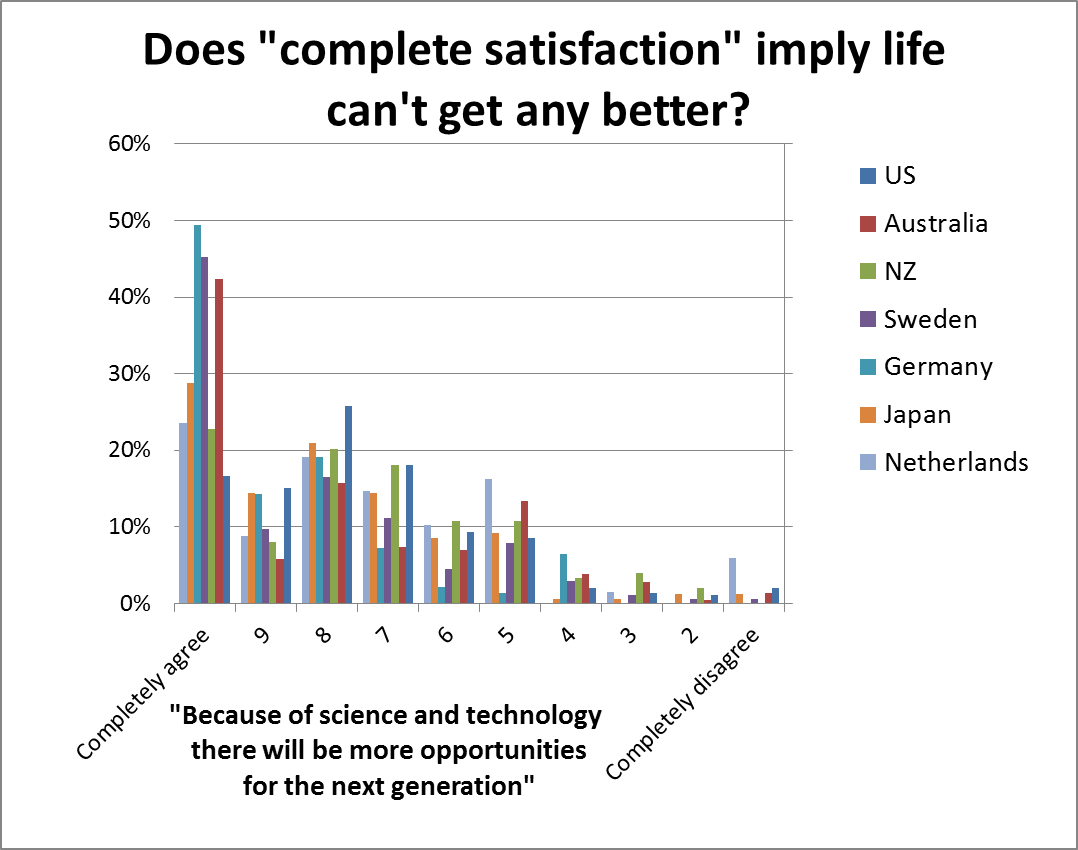 Postscript: November 2019
Recent research by Alan Piper has suggested that optimism and pessimism about the future have an important influence on life satisfaction that is not attributable to personality differences among individuals. The use of German panel data covering several decades enabled the author to control for individual fixed effects (including those attributable to personality differences). Controlling for fixed effects reduces the estimated coefficients, but their size suggests that views of the future have an important impact irrespective of personality differences. After controlling for fixed effects, the estimated reduction in life satisfaction experienced by individuals who report being pessimistic is comparable to that associated with unemployment.
The paper: ‘Optimism, pessimism and life satisfaction: an empirical investigation’, February 2019, German Socio-Economic Panel (SOEP)
The results suggest that while many people who have high life satisfaction might think that the life they are living is the best possible at present, that is consistent with them being optimistic about the potential for their lives to become even better in future.
Posted by Winton Bates at 7:00 AM