Are culture and economic freedom substitutes or complements in facilitating economic development?

A couple of articles by Claudia Williamson and Rachel Mathers provide a good place to start to think about this question.

The economic freedom data used in the studies comes from the Fraser Institute. This economic freedom index combines economic and institutional variables relating to size of government, monetary policy and price stability, legal structure and security of private ownership, freedom to trade with foreigners, and regulation of credit, labour and business.

The studies use regression analysis in an attempt to disentangle the impact of economic culture and economic freedom on growth in per capita incomes. There are some differences in the conclusions of the two articles.
The first article, ‘Economic Freedom, Culture and Growth’, for which Claudia Williamson is lead author, was published in Public Choice (2011). The authors found that economic freedom is “relatively more important for growth than culture” and suggested that “culture and economic freedom may best be described as substitutes”. They suggested that trust and respect may become less important from an economic growth perspective as economic institutions are established to enforce property rights and contracts. The authors also acknowledged that culture may have important indirect effects on economic growth by promoting establishment of economic freedom.

The second article, ‘Cultural Context: Explaining the Productivity of Capitalism’ for which Rachel Mathers is lead author, was published in Kyklos (2011). This article extends the line of analysis by including an interaction term (the product of the culture and freedom indexes). The authors find that “such interaction does demonstrate a significant and positive effect on economic growth”. They conclude that if economic culture is deficient, “economic freedom alone may not possess the necessary binding constraints to be as effective as theory predicts”.

After reading these articles again I wanted to get a better feel for the data which the authors use. The first chart has been constructed using the summary data provided in Appendix 2 of the Public Choice article. (The culture index has been rebased from a 0-10 scale to 1-10 scale to assist subsequent analysis) The size of the balls in the chart (it would not be appropriate to refer to them as bubbles) represents the per capita income level for each country in 2000 (That year is chosen for consistency with other data used in the studies. The relevant variable is rgdpl Penn World Tables version 6.2). 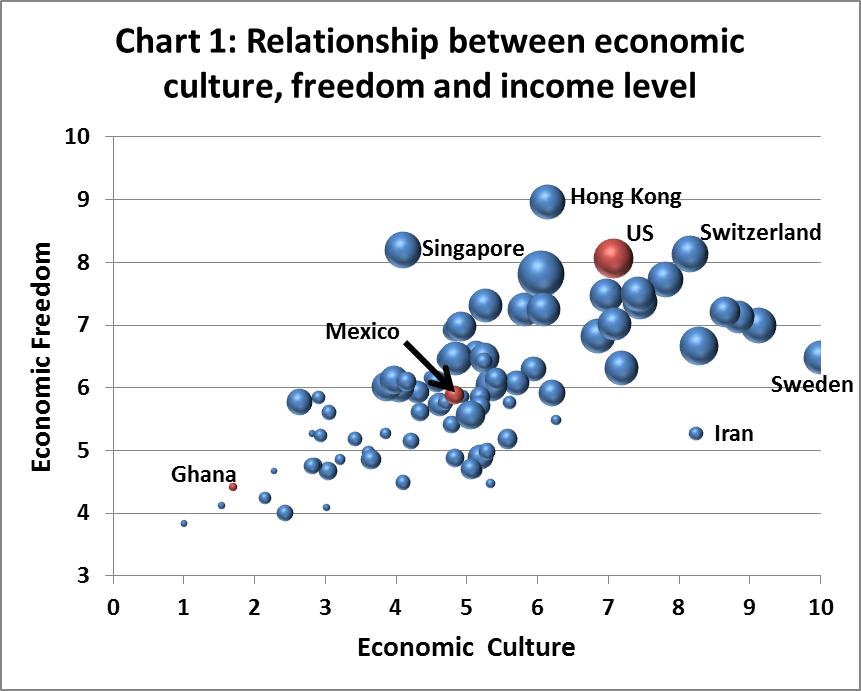 What the chart shows is, of course, consistent with some substitution between culture and economic freedom – for example, both Singapore and Sweden manage to have relatively high per capita income levels. It suggests, however, that substitution possibilities are limited. The countries that rate highly in terms of culture also tend to rate highly in economic freedom, and vice versa.

The finding in the Kyklos article concerning the importance of interaction between culture and freedom suggested to me that it might make sense to use a Cobb Douglas production function in further regression analysis. The isoquants in Chart 2 have been constructed using the coefficients of such an analysis. The isoquants show the differing combinations of culture and freedom that are estimated to produce a given level of average income. The per capita income level of the US in 2000 was about 4.25 times that of Mexico, which in turn was a bit more than 4.25 times that of Ghana. 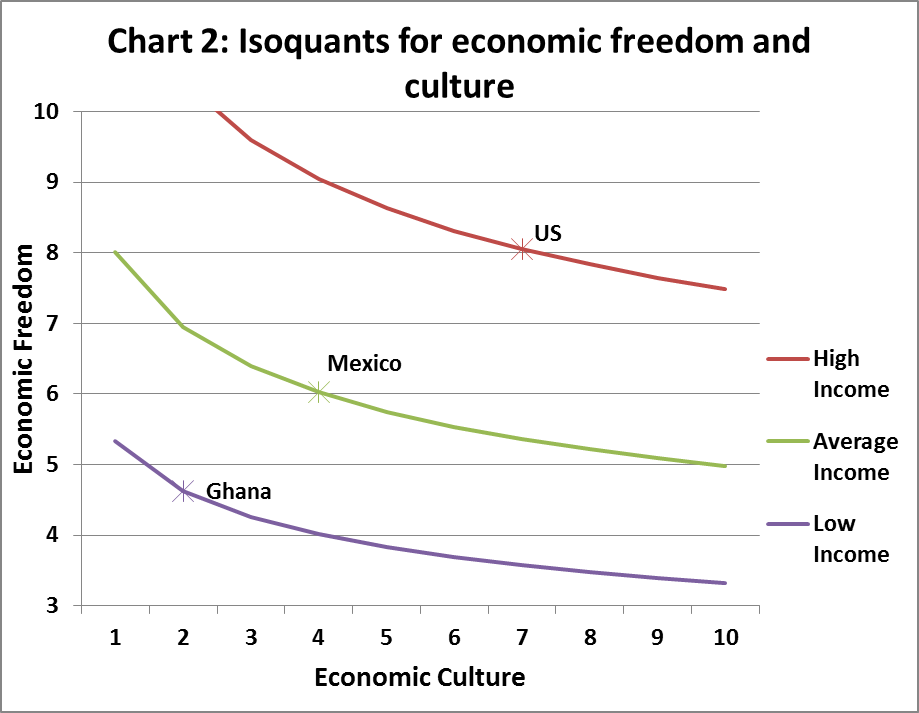 If the isoquants are interpreted as reflecting a production function, the Chart suggests that in the absence of a supportive culture, high levels of economic freedom cannot produce high average income levels. However, it might be more appropriate for the isoquants to be interpreted as being determined simultaneously by interaction between culture, economic freedom and development levels. Under that interpretation, a high level of economic freedom is unlikely to be sustainable in the absence of some cultural support because law and order problems would constitute a major threat to lives and property.

However, I have yet to provide a satisfactory answer the question raised in my last past of whether emancipative values (as defined by Christian Welzel) support economic freedom.
Posted by Winton Bates at 9:43 AM