Can progress be attributed to exchange and specialization?

'Somewhere in Africa more than 100,000 years ago, a phenomenon new to the planet was born. A Species began to add to its habits, generation by generation, without (much) changing its genes. What made this possible was exchange, the swapping of things and services between individuals. That gave the Species an external, collective intelligence far greater than anything it could hold in its admittedly capricious brain. Two individuals could each have two tools or two ideas while each knowing how to make only one. ... In this way, exchange encouraged specialization, which further increased the number of different habits the Species could have, while shrinking the number of things that each individual knew how to make. Consumption could grow more diversified, while production grew more specialized' (Matt Ridley, ‘The Rational Optimist’, 2010: 350).

Ridley’s bold claim is that human progress can be explained mainly in terms of exchange and specialization. Eric Jones, a scholar who has written extensively on the history of human progress, considers that Ridley makes the case very well, based ‘on the few knowns of early pre-history’. Jones also considers that Ridley gets the story of the industrial revolution ‘mostly right’ (Review in ‘Policy’, Spring 2010, 26 (3)).
The weight that we can place on exchange and specialization as explanators of human progress depends importantly on the extent to which advance of knowledge and innovation can be attributed to exchange and specialization. It is possible to go some distance in explaining technological progress as a consequence of specialization. As Bill Easterly points out in his NYT review, however, many breakthroughs come from creative outsiders who combine technologies generated by different specialties.

Ridley mentions that government actions of various kinds in different countries have often inhibited innovation, particularly the introduction of new products and new ways of doing things that threaten the survival of established patterns of production. The implication is that freedom is a necessary condition for progress comes through clearly in Ridley’s recent contribution to Cato Unbound:


‘I am saying that there have always been liberals, who want to be free to trade in ideas as well as things, and there have always been predators, who want to extract rents by force if necessary. The grand theme of history is how the crushing dominance of the latter has repeatedly stifled the former. As Joel Mokyr puts it: “Prosperity and success led to the emergence of predators and parasites in various forms and guises who eventually slaughtered the geese that laid the golden eggs”. The wonder of the last 200 years is not the outbreak of liberalism, but the fact that it has so far fought off the rent-seeking predators by the skin of its teeth: the continuing triumph of the Bourgeoisie’ (p. 252).
I can’t help thinking that this sounds more like rational pessimism than rational optimism. According to Ridley, the industrial revolution is largely a story about coal - and progress since then has been possible mainly because of abundant cheap energy from fossil fuels. He notes that his optimism wobbles when he looks at the politics of carbon emissions reduction and the potential this has to load economies with further rules, restrictions, subsidies, distortions and corruption (p. 347). 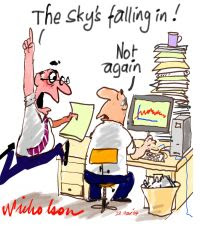 Cartoon by Nicholson from "The Australian" newspaper: http://www.nicholsoncartoons.com.au/

The optimistic note on which Ridley ends his book comes from his view that innovation is such an evolutionary, bottom-up phenomenon that it will continue as long as exchange and specialization are allowed to thrive somewhere in the world.

In the end, it would seem that the gains from innovation, exchange and specialization all depend on liberty – liberty is the key to human progress.
Posted by Winton Bates at 2:51 PM

I agree that liberty is the key to innovation. So is the necessity to innovate derived from having this liberty to find new things to be needed for innovation.

Reminds me of the age-old question "which comes first?"
The chicken or the egg?

I think that is a good point, Jan.

Liberty has to some extent been hard won as a result of risks taken by scientists and innovators in challenging powerful interests.

Unfortunately, Matt Ridley doesn't have much to say about this. Tim Ferris has a good discussion of links between the history of evolution of liberty and science in "The Science of Liberty', discussed briefly here .