Why don't the anti-Collingwood mob lighten up?

I’m not a football fanatic. I watch a game on TV now and then during the season, but I don’t really get interested until the finals are on.


After watching both the AFL and Rugby League grand finals this weekend I couldn’t help notice that the losers of both contests looked as though they were about to go to the gallows. Perhaps they were worried about how their fans would react. Why don’t they – the players and fans - just lighten up? After all, football is only a game!

There is research suggesting that a lot of fans take losing very seriously. Researchers discovered that fans of a men’s basket ball team were more depressed after a loss than happy after a win. Compared to the winners, those who watched their team lose had darker moods, they were more pessimistic when rating their mental ability; and they predicted that an attractive person would be more likely to reject them.

I can’t help feeling a bit sorry for the St Kilda and Roosters supporters who had high hopes for the victory of their teams. But I admit to some schadenfreude about the other people who wanted Collingwood to lose. This year supporters of Collingwood’s traditional rivals, Carlton and Essendon, seem to have been joined by a motley crew of supporters of other clubs to form an ABC (Anyone But Collingwood) brigade, consisting of people who have nothing in common except their desire for Collingwood to lose the grand final.

One example of the attitude I am writing about will suffice. For reasons best known to herself, Judith Sloan began an otherwise sensible article published on Saturday in ‘The Australian’ about the ABC (Australian Broadcasting Commission) by suggesting that Collingwood supporters have a psychopathology which causes them to be one-eyed, irrational and rabid. Perhaps she thought that all Collingwood supporters had already cancelled their subscriptions to ‘The Australian’ after reading the attempt at humour at Collingwood’s expense in the lead article on page one the previous Saturday.

I find it difficult to understand why Collingwood supporters arouse so much antipathy. It can’t be because we win too often. After all, our last premiership was 20 years ago. Perhaps it has to do with the ability of supporters to remain enthusiastic despite all the defeats of the past couple of decades. But who could resist being enthusiastic about a young team that plays as though they really want possession of the ball and whose hand-passing leaves opponents flat-footed. 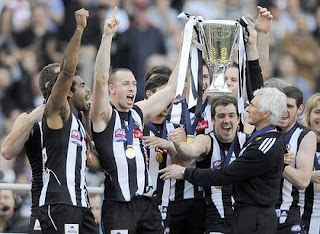 Winners are grinners. Photo by Sebastian Costanzo published in ‘The Age’, here.

Some might suggest that the anti-Collingwood mob don’t like us because they think we like being disliked. Ugh! That doesn’t make sense to me. But Collingwood supporters can sometimes appreciate a joke against themselves. This is probably because we get plenty of practice. The best anti-Collingwood joke I heard this week is this one. Question: ‘What do you call a Collingwood supporter in a suit?’ Answer: the defendant.
Posted by Winton Bates at 10:53 PM

Email ThisBlogThis!Share to TwitterShare to FacebookShare to Pinterest
Labels: Rationality of behaviour

great attempt at intelligence. absolutely zero point made... am i supposed to feel sorry for you? laugh at or with you? like collingwood? feel good when my team loses?... what else should i expect from a pies supporter?